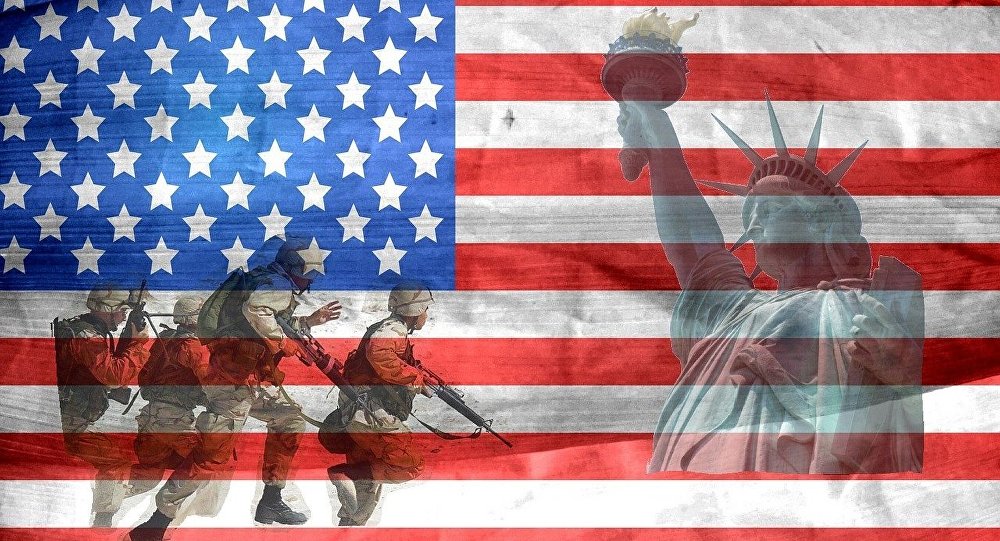 The ugly row over whether President Trump disrespected the young widow of a fallen American soldier has overshadowed a bigger issue. That is, the increasing number of US military operations across the African continent.

19 Oct 2017 – Two weeks ago, Sgt La David Johnson (25) was killed along with three other US special forces troops when Islamist militants ambushed their patrol in the West African country of Niger. Trump got into hot water this week about reported offhand comments he made to the widow of Green Beret Johnson. The president denies he said anything disrespectful. Although the dead soldier’s family says otherwise.

In all the media controversy over what Trump said or didn’t say, questions about what US troops are doing in Niger are unfortunately overlooked. Not just Niger, but in dozens of other African nations.

It is reckoned from US army data that there are thousands of special forces and other military personnel carrying out up to 100 missions at any given time in some 24 African states. That’s nearly half of all the countries comprising the African continent.

US special forces and surveillance drone operations are deployed in Niger, Chad, Mali and Sudan which all run along the southern Sahara desert. Further south in sub-Saharan Africa, US military are operating in Nigeria, Central African Republic, Uganda, Ethiopia and, of course, Somalia, where they are involved in a state of war against Islamist al Shabab militants.

The deployment of US troops in Africa was first stepped up under President GW Bush when his administration formed AFRICOM in 2007, a whole US command dedicated to the continent. Subsequently, under President Barack Obama, the American deployments increased further. Now under President Trump, the US force presence is reckoned to be at its highest level yet.

The official explanation is that American soldiers, Navy and air power, as well as CIA clandestine operations, are there to counter terror groups, who could plan and mount strikes on Europe and North America.

True, there are several dangerous terror networks active in various African states, from al Shabaab in Somalia, to Boko Haram in Nigeria and al-Qaeda in the Maghreb. The latter has affiliates in Algeria, Mali, Chad and Niger where the US troops were killed recently along with a number of  local forces they were supporting.

But there is more than a suspicion that the US is using the cover of combating terrorism to conceal and project its real objective, which is to exert its influence over African nations. One observation for raising doubts is that the problem of these terror groups has actually grown more rapidly after the US troops started to be deployed in larger numbers under President Bush. Echoes of Afghanistan, Iraq and Syria here.

When Trump hosted several African leaders last month in New York during the UN annual congress he told them that his American investor friends were hotfooting it to the continent “to make a lot of money”. Typical of Trump, everything is reduced to filthy lucre. Now he may have been trying to charm his guests with a little light-hearted banter, but there’s much more to the joke. Africa is indeed seen as the continent of the future owing to its prodigious and still largely untapped resources.

The trouble for America and other Western powers is that China has stolen a march on them in terms of cultivating investments and harnessing resources across Africa. Under President Xi Jinping, China has investment projects worth an estimated $60 billion in dozens of African countries. This is way ahead of what the Americans or Europeans have invested.

Earlier this year, China opened its first ever overseas military base, in the East African country of Djibouti. That’s still small news compared with the reported 46 military bases that the US has across the continent.

Beijing said its new military facilities in Djibouti are to secure vital shipping routes against piracy in the Gulf of Aden. That may be partly true. But there is also the factor of China wanting a security foothold in a continent where it has staked so much of its future economic growth plans.

The big difference between the US and China is that while Beijing has devoted most of its resources to developing trade and industry with African states, Washington’s emphasis is on military relations.

China has gained much respect from African nations for its genuine commitment to partnership. It is bringing capital and technology to Africa and gaining access to natural resources of oil and gas, metals and other minerals. Unlike the old European colonialism, China’s involvement in Africa is based on partnership and mutual development. For access to raw materials, China has built schools, universities, telecommunications and transport networks, which are all helping the continent reach its huge potential.

The Americans like the Europeans are stuck in an “extractive mentality” when it comes to Africa. But today, American capitalism is broke. It can’t even invest in its own nation never mind Africa.

Trump speaks for American capitalism. Knowing the rich resources possessed in Africa’s earth and its people, Trump salivates over the prospect of making big bucks. But the Americans aren’t prepared to spend the investment money needed to harness the rewards.

That’s where the US military muscle comes in. In place of proper economic investment, diplomacy and political partnership, Washington is using its military edge to encroach on Africa — under the guise of “fighting terrorism”.

That’s not to say that American troops aren’t confronting terror groups. They are, as the deadly firefight in Niger shows.

But the real purpose for increasing US military strength in Africa is about securing American strategic economic interests “on the cheap” by using military power as opposed to deploying financial commitment in the way that China has.

The Americans want to have military firepower in place across Africa in the event of a sharp confrontation with China. China is seen as the global rival to failing US economic power. If relations turn really nasty — as they could over any number of issues, from North Korea to territorial disputes in the South China Sea — the US wants to have military ways to cut China off in Africa.

Like the Europeans in a previous century, the Americans are in a “scramble for Africa”. This time the scramble is all about cornering countries and resources from China’s legitimate expanding bilateral interests with African nations.

However, America’s militarism in Africa will bring no benefit to the countries. As in other parts of the globe, the Middle East, North Africa, Central Asia, the pattern clearly shows that terrorism burgeons where US military operations occur.

Besides, American capitalism is not motivated by developing Africa for its people. It’s about making profits for Wall Street and rich investors like Trump.

The real danger is that this militarism will lead to another point of confrontation with China if the latter’s economic interests are threatened, as they were when US and NATO forces bombed Libya in 2011 for regime change.

It’s such a crying shame that American widows are having their hearts broken for a mission that is totally fraudulent — and getting no thanks for it from a callous Commander-in-Chief.