Clinton, Assange and the War on Truth 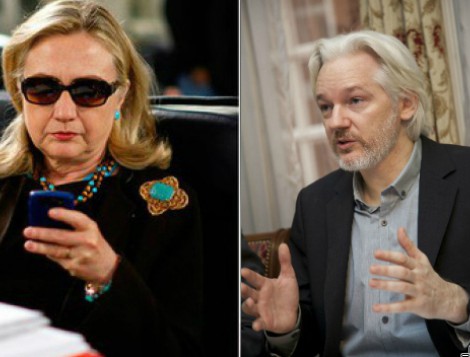 20 Oct 2017 – On 16 October, the Australian Broadcasting Corporation aired an interview with Hillary Clinton: one of many to promote her score-settling book about why she was not elected President of the United States.

Wading through the Clinton book, What Happened, is an unpleasant experience, like a stomach upset. Smears and tears. Threats and enemies. “They” (voters) were brainwashed and herded against her by the odious Donald Trump in cahoots with sinister Slavs sent from the great darkness known as Russia, assisted by an Australian “nihilist”, Julian Assange.

In The New York Times, there was a striking photograph of a female reporter consoling Clinton, having just interviewed her. The lost leader was, above all, “absolutely a feminist”. The thousands of women’s lives this “feminist” destroyed while in government – Libya, Syria, Honduras – were of no interest.

In New York magazine, Rebecca Trainster wrote that Clinton was finally “expressing some righteous anger”. It was even hard for her to smile: “so hard that the muscles in her face ache”. Surely, she concluded, “if we allowed women’s resentments the same bearing we allow men’s grudges, America would be forced to reckon with the fact that all these angry women might just have a point”.

Drivel such as this, trivialising women’s struggles, marks the media hagiographies of Hillary Clinton. Her political extremism and warmongering are of no consequence. Her problem, wrote Trainster, was a “damaging infatuation with the email story”. The truth, in other words.

The leaked emails of Clinton’s campaign manager, John Podesta, revealed a direct connection between Clinton and the foundation and funding of organised jihadism in the Middle East and Islamic State (IS). The ultimate source of most Islamic terrorism, Saudi Arabia, was central to her career.

One email, in 2014, sent by Clinton to Podesta soon after she stepped down as US Secretary of State, discloses that Islamic State is funded by the governments of Saudi Arabia and Qatar. Clinton accepted huge donations from both governments for the Clinton Foundation.

As Secretary of State, she approved the world’s biggest ever arms sale to her benefactors in Saudi Arabia, worth more than $80 billion. Thanks to her, US arms sales to the world – for use in stricken countries like Yemen – doubled.

This was revealed by WikiLeaks and published by The New York Times. No one doubts the emails are authentic. The subsequent campaign to smear WikiLeaks and its editor-in-chief, Julian Assange, as “agents of Russia”, has grown into a spectacular fantasy known as “Russiagate”. The “plot” is said to have been signed off by Vladimir Putin himself. There is not a shred of evidence.

The ABC Australia interview with Clinton is an outstanding example of smear and censorship by omission. I would say it is a model.

“No one,” the interviewer, Sarah Ferguson, says to Clinton, “could fail to be moved by the pain on your face at that moment [of the inauguration of Trump] … Do you remember how visceral it was for you?”

CLINTON: I think Russia affected the perceptions and views of millions of voters, we now know. I think that their intention coming from the very top with Putin was to hurt me and to help Trump.

FERGUSON: How much of that was a personal vendetta by Vladimir Putin against you?

CLINTON: … I mean he wants to destabilise democracy. He wants to undermine America, he wants to go after the Atlantic Alliance and we consider Australia kind of a … an extension of that …

The opposite is true. It is Western armies that are massing on Russia’s border for the first time since the Russian Revolution 100 years ago.

FERGUSON: How much damage did [Julian Assange] do personally to you?

CLINTON: Well, I had a lot of history with him because I was Secretary of State when ah WikiLeaks published a lot of very sensitive ah information from our State Department and our Defence Department.

What Clinton fails to say – and her interviewer fails to remind her – is that in 2010, WikiLeaks revealed that Secretary of State Hillary Clinton had ordered a secret intelligence campaign targeted at the United Nations leadership, including the Secretary General, Ban Ki-moon and the permanent Security Council representatives from China, Russia, France and the UK.

A classified directive, signed by Clinton, was issued to US diplomats in July 2009, demanding forensic technical details about the communications systems used by top UN officials, including passwords and personal encryption keys used in private and commercial networks.

This was known as Cablegate. It was lawless spying.

CLINTON:  He [Assange] is very clearly a tool of Russian intelligence. And ah, he has done their bidding.

Clinton offered no evidence to back up this serious accusation, nor did Ferguson challenge her.

CLINTON: You don’t see damaging negative information coming out about the Kremlin on WikiLeaks. You didn’t see any of that published.

This was false. WikiLeaks has published a massive number of documents on Russia – more than 800,000, most of them critical, many of them used in books and as evidence in court cases.

CLINTON:  So I think Assange has become a kind of nihilistic opportunist who does the bidding of a dictator.

FERGUSON: Lots of people, including in Australia, think that Assange is a martyr for free speech and freedom of information. How would you describe him? Well, you’ve just described him as a nihilist.

CLINTON: Yeah, well, and a tool. I mean he’s a tool of Russian intelligence. And if he’s such a, you know, martyr of free speech, why doesn’t WikiLeaks ever publish anything coming out of Russia?

Again, Ferguson said nothing to challenge this or correct her.

CLINTON: There was a concerted operation between WikiLeaks and Russia and most likely people in the United States to weaponise that information, to make up stories … to help Trump.

FERGUSON: Now, along with some of those outlandish stories, there was information that was revealed about the Clinton Foundation that at least in some of the voters’ minds seemed to associate you …

CLINTON: Yeah, but it was false!

FERGUSON: … with the peddling of information …

CLINTON: It was false! It was totally false! …

FERGUSON: Do you understand how difficult it was for some voters to understand the amounts of money that the [Clinton] Foundation is raising, the confusion with the consultancy that was also raising money, getting gifts and travel and so on for Bill Clinton that even Chelsea had some issues with? …

CLINTON: Well you know, I’m sorry, Sarah, I mean I, I know the facts …

The ABC interviewer lauded Clinton as “the icon of your generation”. She asked her nothing about the enormous sums she creamed off from Wall Street, such as the $675,000 she received for speeches at Goldman Sachs, one of the banks at the centre of the 2008 crash. Clinton’s greed deeply upset the kind of voters she abused as “deplorables”.

Clearly looking for a cheap headline in the Australian press, Ferguson asked her if Trump was “a clear and present danger to Australia” and got her predictable response.

This high-profile journalist made no mention of Clinton’s own “clear and present danger” to the people of Iran whom she once threatened to “obliterate totally”, and the 40,000 Libyans who died in the attack on Libya in 2011 that Clinton orchestrated. Flushed with excitement, the Secretary of State rejoiced at the gruesome murder of the Libyan leader, Colonel Gaddafi.

“Libya was Hillary Clinton’s war”, Julian Assange said in a filmed interview with me last year. “Barack Obama initially opposed it. Who was the person championing it? Hillary Clinton.  That’s documented throughout her emails … there’s more than 1700 emails out of the 33,000 Hillary Clinton emails that we’ve published, just about Libya. It’s not that Libya has cheap oil. She perceived the removal of Gaddafi and the overthrow of the Libyan state – something that she would use in her run-up to the general election for President.

“So in late 2011 there is an internal document called the Libya Tick Tock  that was produced for Hillary Clinton, and it’s the chronological description of how she was the central figure in the destruction of the Libyan state, which resulted in around 40,000 deaths within Libya; jihadists moved in, ISIS moved in, leading to the European refugee and migrant crisis.

“Not only did you have people fleeing Libya, people fleeing Syria, the destabilisation of other African countries as a result of arms flows, but the Libyan state itself was no longer able to control the movement of people through it.”

This – not Clinton’s “visceral” pain in losing to Trump nor the rest of the self-serving scuttlebutt in her ABC interview – was the story. Clinton shared responsibility for massively de-stabilising the Middle East, which led to the death, suffering and flight of thousands of women, men and children.

Ferguson raised not a word of it. Clinton repeatedly defamed Assange, who was neither defended nor offered a right of reply on his own country’s state broadcaster.

In a tweet from London, Assange cited the ABC’s own Code of Practice, which states: “Where allegations are made about a person or organisation, make reasonable efforts in the circumstances to provide a fair opportunity to respond.”

Following the ABC broadcast, Ferguson’s executive producer, Sally Neighbour, re-tweeted the following: “Assange is Putin’s bitch. We all know it!”

The slander, since deleted, was even used as a link to the ABC interview captioned ‘Assange is Putins (sic) b****. We all know it!’.

In the years I have known Julian Assange, I have watched a vituperative personal campaign try to stop him and WikiLeaks. It has been a frontal assault on whistleblowing, on free speech and free journalism, all of which are now under sustained attack from governments and corporate internet controllers.

The first serious attacks on Assange came from the Guardian which, like a spurned lover, turned on its besieged former source, having hugely profited from WikiLeaks’ disclosures. With not a penny going to Assange or WikiLeaks, a Guardian book led to a lucrative Hollywood movie deal. Assange was portrayed as “callous” and a “damaged personality”.

It was as if a rampant jealousy could not accept that his remarkable achievements stood in marked contrast to that of his detractors in the “mainstream” media. It is like watching the guardians of the status quo, regardless of age, struggling to silence real dissent and prevent the emergence of the new and hopeful.

Today, Assange remains a political refugee from the war-making dark state of which Donald Trump is a caricature and Hillary Clinton the embodiment. His resilience and courage are astonishing. Unlike him, his tormentors are cowards.