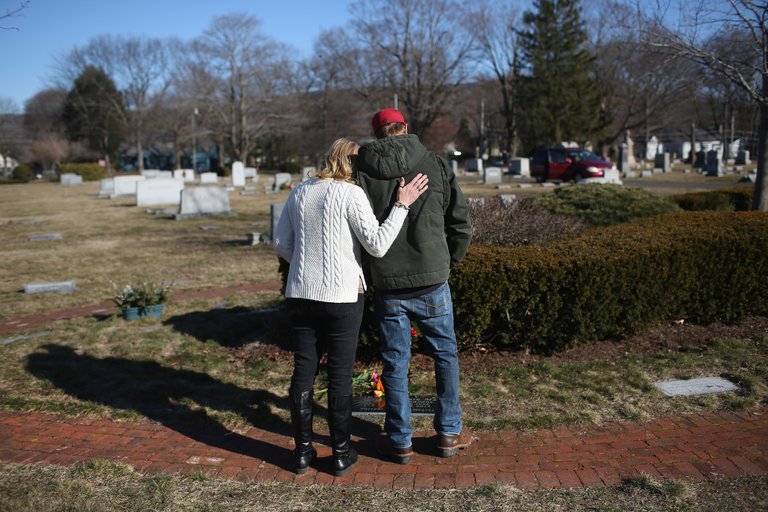 Family members visiting the gravesite of a loved one who died of a heroin overdose. Credit John Moore/Getty Images

18 Oct 2017 – For decades, America has waged an ineffective war on drug pushers and drug lords, from Bronx street corners to Medellin, Colombia, regarding them as among the most contemptible specimens of humanity.

One reason our efforts have failed is we ignored the biggest drug pushers of all: American pharmaceutical companies.

Big Pharma should be writhing in embarrassment this week after The Washington Post and “60 Minutes” reported that pharmaceutical lobbyists had manipulated Congress to hamstring the Drug Enforcement Administration. But the abuse goes far beyond that: The industry systematically manipulated the entire country for 25 years, and its executives are responsible for many of the 64,000 deaths of Americans last year from drugs — more than the number of Americans who died in the Vietnam and Iraq wars combined.

The opioid crisis unfolded because greedy people — Latin drug lords and American pharma executives alike — lost their humanity when they saw the astounding profits that could be made.

It used to be in America that people became addicted to opioids through illegal drugs. In the 1960s, for example, 80 percent of Americans hooked on opioids began with heroin.

That has completely changed. Today, 75 percent of people with opioid addictions began with prescription painkillers. The slide starts not on a street corner, but in a doctor’s office.

That’s because pharmaceutical companies in the 1990s sought to promote opioid painkillers as new blockbuster drugs. Company executives accused doctors of often undertreating pain (there was something to this, but pharma executives contrived to turn it into a crisis that they could monetize). The companies backed front organizations like the American Pain Foundation, which purported to speak on behalf of suffering patients.

These front organizations, as well as professionals sometimes funded by the pharmaceutical industry, heralded pain as the “fifth vital sign,” along with pulse, temperature, respiratory rate and blood pressure. The opioid promoters hailed opioids as “safe and effective,” and they particularly encouraged opioids for returning veterans — one reason so many veterans have suffered addictions.

Pharma companies spent heavily advertising opioids — $14 million in medical journals in 2011 alone, almost triple what they had spent in 2001 and pitched them for a wide range of chronic pains, such as arthritis and back pain.

Companies even argued that signs of addiction were a reason to prescribe more opioids. Endo Pharmaceuticals distributed a book suggesting that when a patient showed strange behavior, “the clinician’s first response” should be to increase the dose of opioids.

Several of these examples come from a lawsuit by Ohio against major pharmaceutical companies, including Purdue, Teva, Cephalon, Johnson & Johnson and Janssen. A company affiliated with Purdue pleaded guilty of felony fraud in connection with its marketing of OxyContin, but none of its executives went to prison.

Drug companies employed roughly the same strategy as street-corner pushers: Get somebody hooked and business will take care of itself. So last year, Americans received 236 million opioid prescriptions — that’s about one bottle for every adult.

A Senate investigation found that one company, Insys Therapeutics, successfully redirected a powerful opioid called Subsys, meant for cancer pain, to patients without cancer. Sarah Fuller, a woman with neck and back pain, was prescribed Subsys by her doctor, who received payments from Insys.

Fuller died of an overdose of Subsys.

Meanwhile, Insys had the best-performing initial public offering in 2013, and revenue tripled in the next two years, the Senate report said. Likewise, the Sackler family, owner of the company that makes OxyContin, joined Forbes’s list of richest American families in 2015, with $14 billion.

It’s maddening that the public narrative is still often about an opioid crisis fueled by the personal weakness and irresponsibility of users. No, it’s fueled primarily by the greed and irresponsibility of drug lords — including the kind who inhabit executive suites. The Washington Post quoted a former D.E.A. official as referring to pharmaceutical company representatives as “drug dealers in lab coats.”

I was invited the other day to a gala honoring the C.E.O. of one of these pharma companies for his moral leadership. I wanted to throw up. Since 2000, more than 200,000 Americans have died from overdoses of prescription opioids — the consequence of a deliberate strategy to make money by ignoring public welfare.

Our pattern of opioid addiction points to a tragedy, driven by the greed of some of America’s leading companies and business executives, systematically manipulating doctors and patients and killing people on a scale that terrorists could never dream of.

There’s a lot of talk in the Trump administration about lifting regulations to free up the dynamism of corporations. Really? You want to see the consequences of unfettered pharma? Go visit a cemetery.

Nicholas Kristof has been a columnist for The New York Times since 2001. He grew up on a farm in Oregon, graduated from Harvard, studied law at Oxford University as a Rhodes Scholar, and then studied Arabic in Cairo. He was a longtime foreign correspondent for NYT and speaks Chinese, Japanese and other languages. Mr. Kristof has won two Pulitzer Prizes for his coverage of Tiananmen Square and the genocide in Darfur, along with many humanitarian awards such as the Anne Frank Award and the Dayton Literary Peace Prize.

A version of this op-ed appears in print on October 19, 2017, on Page A26 of the New York edition with the headline: ‘Drug Dealers in Lab Coats’.

One Response to “‘Drug Dealers in Lab Coats’”