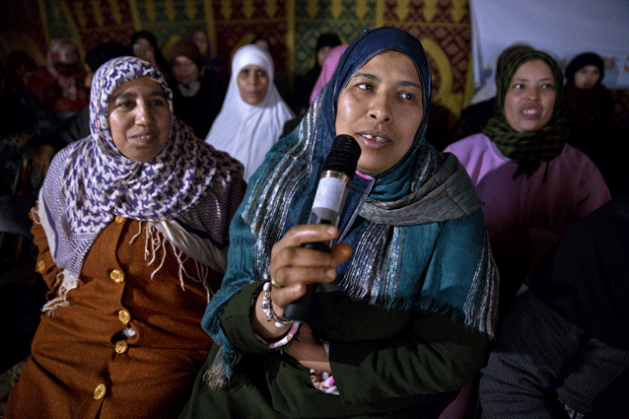 Women participate in an event in Morocco organized to support and encourage women running for local election and to encourage voting.
Credit: Ellie Kealey / Oxfam

26 Oct 2017 – Whether targeted by perpetrators of sexual violence, oppressed by ideological extremists, or uniquely threatened by the bombing of hospital maternity units, women often bear the brunt of conflicts. Yet when it comes to peace negotiations, women too often don’t have a seat at the table. The continuing reality that men, particularly armed men, enjoy an almost exclusive role in peace processes defies both logic and evidence.

It is now 17 years since UN resolution 1325 was adopted – the first Security Council resolution to establish the so-called women, peace and security agenda, which aims to uphold women’s rights in war and roles in peace.

Ahead of the Open Debate on Peace and Security at the UN, it is the time reflect and double down both on what promises are left unfilled, as well as what progress has been made – there are examples of both.

There have been some positive signs of headway, as seven subsequent UN Security Council resolutions have helped strengthen policies and norms worldwide over the past decade. Almost 70 countries have national action plans to put women, peace and security aims into practice.

This year, renewed peacekeeping and peace enforcement mandates for Western Sahara, Sudan and Somalia included new language on the importance of women’s participation. Hopefully this trend will continue with South Sudan’s peacekeeping mandate renewal just around the corner.

And just weeks ago, the US Congress passed the Women, Peace and Security Act. Among other aims, the act makes it US policy to promote the meaningful participation of women in efforts to address conflict overseas. But crucial gaps remain – not least, the routine exclusion of women from peace processes.

Why does this matter? Because women missing from peace talks means world leaders are missing opportunities to save countless lives and stabilize an increasingly fractured world.

Analysis of various conflicts and peace processes worldwide shows that when women able to bring crucial perspectives and experiences from civil society and local communities, the chances of peace agreements being reached and sustained rises dramatically.

Worldwide, women already play crucial roles in resolving disputes in their families and communities, and identifying challenges and solutions that influence social cohesion and stability. Tapping into that experience and expertise, a peace that reflects the needs and aspirations of the whole population, benefits everyone, male and female, and is more likely to last.

That simple logic should drive a paradigm shift in international diplomacy to prevent and resolve conflicts. Wars not only take and destroy lives. It is estimated that the total monetary cost of violence and conflict around the world was $13.6 trillion in 2015.

But instead, we hear excuses. Time and time again, key members of the UN Security Council stubbornly stick to strategies that not only struggle to resolve conflicts but offer only hollow rhetoric about supporting women’s participation.

All speak loudly in favor of women’s rights and role inside the UN Security Council chamber, but for the rest of the year leading governments routinely prioritize other interests when it comes to international diplomacy. The standard group photograph of male delegates at any of the major peace talks on Syria or Yemen gives us a damning snapshot of just how far we still have to go.

When the US Security Council Resolution 2242 was adopted, mandating the UN to double its female police representation and reaffirming support for women in civil society, it enjoyed historic support. Unfortunately, in the time since, there has been very little action to back it up.

Friday’s Security Council annual debate will be a chance to reflect on the advances and challenges that have emerged since the adoption of Resolution 2242 and for members to recommit to back up their words with actions.

Several key areas of UN reform would also help: improving the number of women in senior UN positions, including in conflict missions, strengthening gender capacity in peacekeeping missions and assessments, and drastically increasing funding and other support for local women’s organizations.

Addressing these specifics will signal progress, but above all, we need a radical shift in mindsets and priorities to accelerate progress, with support for both the quantity and quality of women’s involvement in peace processes and political decision-making a key objective.

In a world seemingly frayed by growing divisions, with conflicts on the rise and record numbers of people forced from their homes, the continued male monopoly on resolving and preventing conflicts is not just anachronistic – it is a danger to us all.