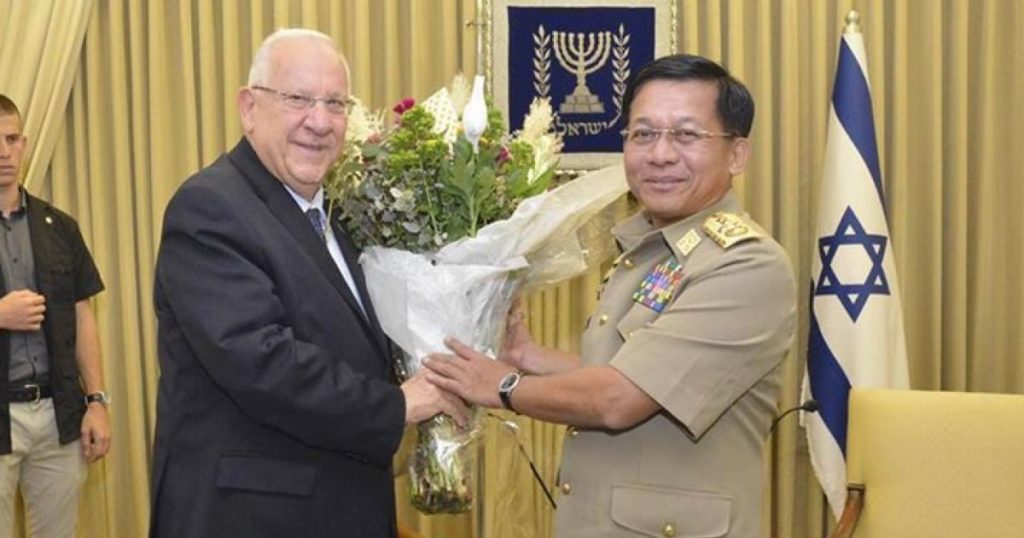 In recent days, the mainstream press has been full of reports of the dire plight of the Rohingya, a Muslim ethnic group in predominantly Buddhist Myanmar that is currently being ethnically cleansed by the Burmese military.  Over 146,000 have fled into neighboring Bangladesh since late August and many observers fear that the military will engage in full-scale genocide.  Latest reports suggest that the military has been sowing landmines along the frontier with Bangladesh across which Rohingya women and children have been fleeing to escape military violence.

Myanmar’s campaign of ethnic cleansing has been widely condemned and the United States and the European Union have maintained an arms embargo on the Burmese military due to ongoing concerns about violations of human rights and religious freedom.  What has not been reported in the mainstream news is the fact that, even during this ongoing genocidal campaign against its Muslim population, Myanmar has been supplied with weaponry by Israel. 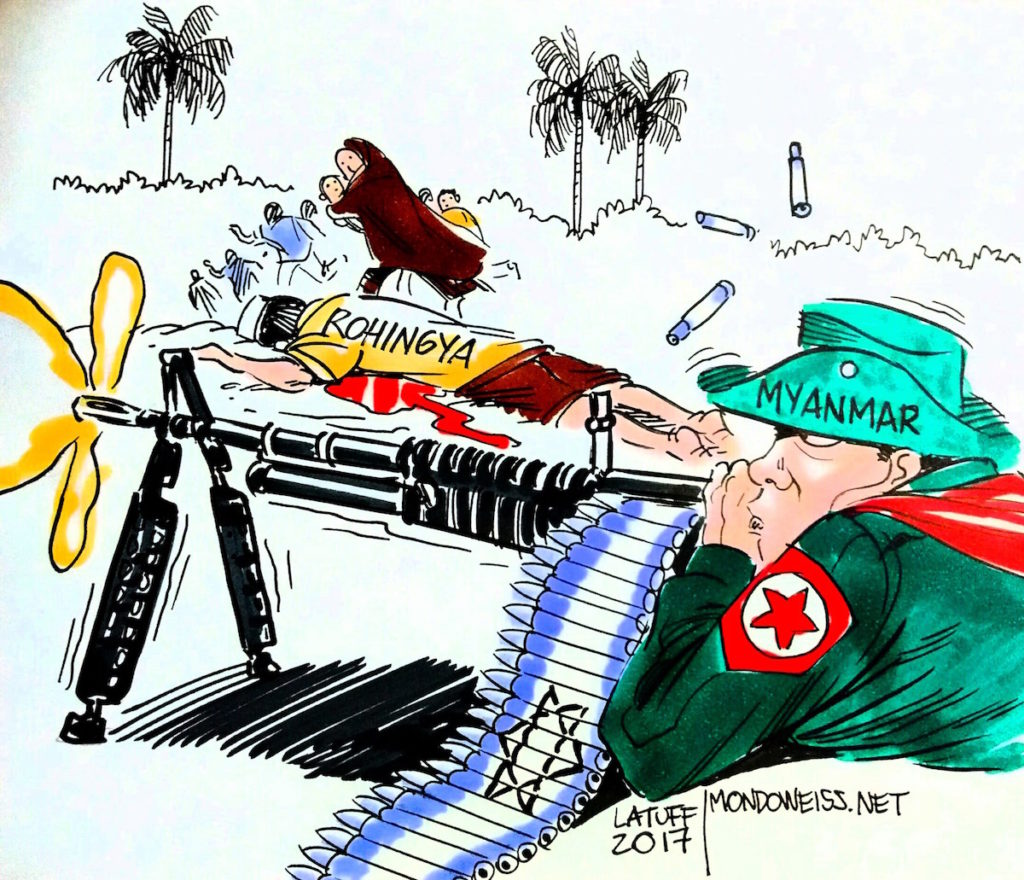 This is by no means the first time that the Israeli defense industry has supplied repressive regimes with the tools of their trade, from apartheid South Africa to Pinochet’s Chile and the Guatemalan dictatorship: its weapons industry, indeed, proudly boasts of the fact that its products come well “field tested”. They usually fail to mention that their weapons have been tested in repressing Palestinian resistance to an illegal occupation, conducting war against the predominantly civilian population of Gaza, or in maintaining surveillance and policing of the illegal apartheid wall that runs through the West Bank.

Those who have been following the close connections between the Israeli defense industry and the United States will not be surprised to learn from Israeli newspaper Ha’aretz that among the companies hosting Burmese military officials Myanmar is defense contractor Elbit Systems, specialists in surveillance equipment that has been deployed both along the apartheid wall and on the U.S. border with Mexico.  Ha’aretz also reports that the head of the Defense Ministry’s International Defense Cooperation Directorate, Michel Ben-Baruch went to Myanmar in the summer of 2015, possibly in conjunction with the sale of Israeli-made patrol boats to the military.

Less well known is the defense firm TAR Ideal Concepts, a conglomerate of Israeli manufacturers military and police equipment which also hosts a defense fair, ISDEF in Tel Aviv, which its CEO Aviad Matza proudly claims has become “the international flagship of the Israeli defense industry.”  Matza is among those who attribute Israel’s prowess in producing the technologies of repression to the laboratory that Palestine furnishes.  As he puts it: “There is no doubt that the secret in the success of Israeli branding in this area lies in the very diverse defense challenges that Israel faces, and the solutions they get – the Iron Dome and the intelligent fences; Tunnel identification systems and armoured windows for housing along the border; Cyber defense for strategic devices and riots control means. All these are practical and equally important, fast solutions, which meet the rapidly changing security needs.”

Matzah does not specify that Israel’s “defense challenges” are largely caused by its 50-year regime of occupation and its 12-year blockade on Gaza. Nor, of course, does he invoke Israel’s own history and current practices of ethnic cleansing, going back to the Nakba of 1947-8 in which Israel was founded and continuing in today’s practices of quiet “transfer” of Palestinians from Israeli-controlled territories.  Like Myanmar, Israel is a state dominated by a single ethnic and religious group that seeks to maintain its political supremacy in open violation of international law and human rights.  Its affinity with Myanmar is only the latest example of the natural alliances that it forms with other regimes whose survival depends on an ideological commitment to ethnic or ideological supremacy.

Israel’s TAR Ideal Concepts uses that experience of control and repression in ways that should concern us all: it not only sells weapons to a genocidal Burmese military, but also operates what Bloomberg describes as “a defense academy that provides training, including military, police, homeland security, and professional training, as well as K-9 training services. It serves ministry of defense (MOD), police departments, and prisons; and law enforcement forces … in Israel and internationally.”

Among the police organizations training in Israel are US law enforcement departments, both police and Homeland Security, who have been brought there annually by the Anti-Defamation League in collaboration with Israel’s national police, military and intelligence services.  Their training, funded by US taxpayers, can include participation in operations on the occupied West Bank against Palestinians. Concern that the highly militarized training of US police forces in Israel has exacerbated the brutality and excessive force that has been used against peaceful demonstrators from Baltimore to Ferguson has inspired Jewish Voice for Peace’s ongoing “Deadly Exchange” campaign against these exchange programs that inculcate the “worst practices” of repressive policing.

In the United States, we still have the space to protest Israel’s baleful influence on our military and police and the international network of repressive forces for which Palestine serves as a malevolent laboratory.  But the Rohingya, like the Palestinians, are at the mercy of Israel’s sophisticated arsenals.  In protesting the deployment of Israeli techniques and equipment against our fellow citizens, we must not forget to draw the lines of solidarity with those who bear the full brunt of this global network of violence and terror.

David Lloyd is Distinguished Professor of English at the University of California, Riverside, and a founding member of the US Campaign for the Academic and Cultural Boycott of Israel.