Making the Rich Richer – How Big Banks Became Our Masters 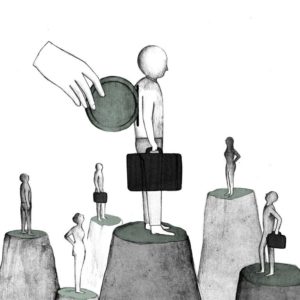 Financial scandal and wrangles over financial rule-making still dominate the headlines. The cyberhacking at Equifax compromised personal records for half of the adult population of the United States. At SoFi, a one-time fintech darling that crowd sources funding for student loans and other types of credit, the chief executive was forced to resign after revelations of sexual harassment and risky lending practices (the company misled investors about its finances and put inexperienced customer service representatives in charge of credit evaluations). The White House and Republicans in Congress in the meantime are trying to roll back hard-won banking regulations in the Dodd-Frank financial oversight law.

All of it brings to mind an acronym familiar to financial writers like myself — BOB, or “bored of banking.” Even some of us that cover the markets for a living can find ourselves BOB. Over the last 10 years, there has been so much financial scandal, so many battles between regulators and financiers, and so much complexity (more liquidity and less leverage with your tier one capital, anyone?) that a large swath of the public has become numb to the debate about how to make our financial system safer.

That’s a dangerous problem, because despite all of the wrangling and rule making, there’s a core truth about our financial system that we have yet to comprehend fully: It isn’t serving us, we’re serving it.

Adam Smith, the father of modern capitalism, envisioned financial services (and I stress the word “service”) as an industry that didn’t exist as an end in itself, but rather as a helpmeet to other types of business. Yet lending to Main Street is now a minority of what the largest banks in the country do. In the 1970s, most of their financial flows, which of course come directly from our savings, would have been funneled into new business investment. Today, only about 15 percent of the money coming out of the largest financial institutions goes to that purpose. The rest exists in a closed loop of trading; institutions facilitate and engage in the buying and selling of stocks, bonds, real estate and other assets that mainly enriches the 20 percent of the population that owns 80 percent of that asset base. This doesn’t help growth, but it does fuel the wealth gap.

This fundamental shift in the business model of finance is what we should really be talking about — rather than the technocratic details of liquidity ratios or capital levels or even how to punish specific banking misdeeds. The big problem is that our banking system would no longer be recognizable to Adam Smith, who believed that for markets to work, all players must have equal access to information, transparent prices and a shared moral framework. Good luck with that today.

While the largest banks can correctly claim that they have offloaded risky assets and bolstered the amount of cash on their balance sheets over the last decade, their business model has become fundamentally disconnected from the very people and entities it was designed to serve. Small community banks, which make up only 13 percent of all banking assets, do nearly half of all lending to small businesses. Big banks are about deal making. They serve mostly themselves, existing as the middle of the hourglass that is our economy, charging whatever rent they like for others to pass through. (Finance is one of the few industries in which fees have gone up as the sector as a whole has grown.) The financial industry, dominated by the biggest banks, provides only 4 percent of all jobs in the country, yet takes about a quarter of the corporate profit pie.

Perhaps that’s why companies of all stripes try to copy its model. Nonfinancial firms as a whole now get five times the revenue from purely financial activities as they did in the 1980s. Stock buybacks artificially drive up the price of corporate shares, enriching the C-suite. Airlines can make more hedging oil prices than selling coach seats. Drug companies spend as much time tax optimizing as they do worrying about which new compound to research. The largest Silicon Valley firms now use a good chunk of their spare cash to underwrite bond offerings the same way Goldman Sachs might.

The blending of technology and finance has reached an apex with the creation of firms like SoFi, which put the same old models on big data steroids. It’s an area we’ll likely hear much more about. A couple of weeks ago, at the Senate Banking Committee hearings on fintech, lawmakers once again struggled with how to think about these latest lending crises. But it’s not data or privacy or algorithms that are the fundamental issue with our financial system. It’s the fact that the system itself has lost its core purpose.

Finance has become the tail that wags the dog. Until we start talking about how to create a financial system that really serves society, rather than just trying to stay ahead of the misdeeds of one that doesn’t, we’ll struggle in vain to bridge the gap between Wall Street and Main Street.

Rana Foroohar, an associate editor and global business columnist at The Financial Times, is the author of Makers and Takers: How Wall Street Destroyed Main Street.

A version of this op-ed appears in print on September 27, 2017, on Page A31 of the New York edition with the headline: Making the Rich Richer.