Mikhail Gorbachev: My Plea to the Presidents of Russia and the United States 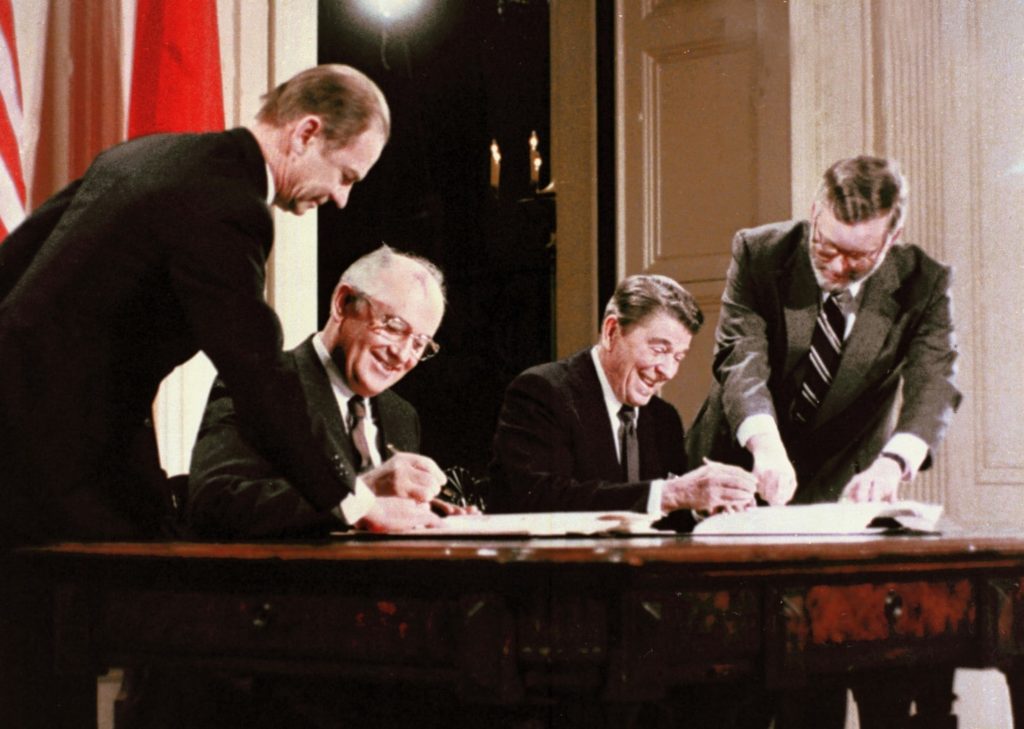 President Ronald Reagan and Soviet leader Mikhail Gorbachev at a signing ceremony for the Intermediate-Range Nuclear Forces Treaty in the White House on Dec. 8, 1987. (Barry Thumma/AP)

11 Oct 2017 – This December will mark the 30th anniversary of the signing of the treaty between the Soviet Union and United States on the elimination of intermediate- and shorter-range missiles. This was the start of the process of radically cutting back nuclear arsenals, which was continued with the 1991 and 2010 strategic arms reduction treaties and the agreements reducing tactical nuclear weapons.

The scale of the process launched in 1987 is evidenced by the fact that, as Russia and the United States reported to the Non-Proliferation Treaty Review Conference in 2015, 80 percent of the nuclear weapons accumulated during the Cold War have been decommissioned and destroyed. Another important fact is that, despite the recent serious deterioration in bilateral relations, both sides have been complying with the strategic weapons agreements.

The Intermediate-Range Nuclear Forces (INF) Treaty, however, is now in jeopardy. It has proved to be the most vulnerable link in the system of limiting and reducing weapons of mass destruction. There have been calls on both sides for scrapping the agreement.

So what is happening, what is the problem, and what needs to be done?

Both sides have raised issues of compliance, accusing the other of violating or circumventing the treaty’s key provisions. From the sidelines, lacking fuller information, it is difficult to evaluate those accusations. But one thing is clear: The problem has a political as well as a technical aspect. It is up to the political leaders to take action.

Therefore I am making an appeal to the presidents of Russia and the United States.

Relations between the two nations are in a severe crisis. A way out must be sought, and there is one well-tested means available for accomplishing this: a dialogue based on mutual respect.

It will not be easy to cut through the logjam of issues on both sides. But neither was our dialogue easy three decades ago. It had its critics and detractors, who tried to derail it.

In the final analysis, it was the political will of the two nations’ leaders that proved decisive. And that is what’s needed now. This is what our two countries’ citizens and people everywhere expect from the presidents of Russia and the United States.

I call upon Russia and the United States to prepare and hold a full-scale summit on the entire range of issues. It is far from normal that the presidents of major nuclear powers meet merely “on the margins” of international gatherings. I hope that the process of preparing a proper summit is in the works even now.

I believe that the summit meeting should focus on the problems of reducing nuclear weapons and strengthening strategic stability. For should the system of nuclear arms control collapse, as may well happen if the INF Treaty is scrapped, the consequences, both direct and indirect, will be disastrous.

The closer that nuclear weapons are deployed to borders, the more dangerous they are: There is less time for a decision and greater risk of catastrophic error. And what will happen to the Nuclear Non-Proliferation Treaty if the nuclear arms race begins anew? I am afraid it will be ruined.

If, however, the INF Treaty is saved, it will send a powerful signal to the world that the two biggest nuclear powers are aware of their responsibility and take their obligations seriously. Everyone will breathe a sigh of relief, and relations between Russia and the United States will finally get off the ground again.

I am confident that preparing a joint presidential statement on the two nations’ commitment to the INF Treaty is a realistic goal. Simultaneously, the technical issues could be resolved; for this purpose, the joint control commission under the INF Treaty could resume its work. I am convinced that, with an impetus from the two presidents, the generals and diplomats would be able to reach agreement.

We are living in a troubled world. It is particularly disturbing that relations between the major nuclear powers, Russia and the United States, have become a serious source of tensions and a hostage to domestic politics. It is time to return to sanity. I am sure that even inveterate opponents of normalizing U.S.-Russian relations will not dare object to the two presidents. These critics have no arguments on their side, for the very fact that the INF Treaty has been in effect for 30 years proves that it serves the security interests of our two countries and of the world.

Mikhail Gorbachev was leader of the Soviet Union from 1985 to 1991.