It remains unclear where the Rohingya would go if they did return, since many of their villages have been burnt to the ground. 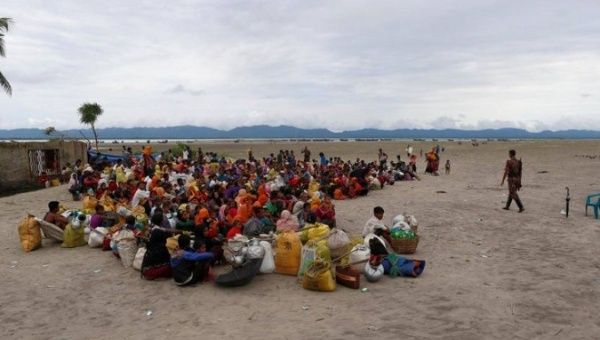 3 Oct 2017 – Myanmar officials have announced that they plan to receive the thousands of Rohingya refugees back into the country. However, a few of the stipulations have left refugees skeptical.

A senior Bangladeshi official said Tuesday that as over 10,000 Rohingyas have amassed near a crossing point into Bangladesh, the practicality of the repatriation endeavor is doubtful.

Notes from Monday’s meeting between the heads of government of the two nations revealed that Myanmar’s plans for repatriation will be more selective than expected.

Authorities said the repatriation plan will require refugees to identify their status through paperwork per the 1993 procedure agreed upon with the Bangladesh government.

Myanmar’s government spokesman said under the 1993 pact, even a hospital record was enough to prove residency. But it is only Myanmar, not Bangladesh, that can verify citizenship.

“Everything was burned, even people were burned,” said a man who identified himself as Abdullah, dismissing the chances that people would have documents to prove a right to stay in Myanmar.

“We have a policy for the repatriation process and we will go along with that,” the spokesman, Zaw Htay, told Reuters.

Although the meeting failed to clarify the details of the repatriation process, a foreign official who attended the event revealed that only those Rohingya refugees who have left during the past year will be welcomed back, AFP reported.

“Their mandate is that they would consider taking back those who came after last October and last August,” the official told AFP on condition of anonymity.

Since Aug 25, over 500,000 Rohingya have streamed into Bangladesh, joining over 300,000 refugees who have fled the organized military violence raised against the community since the early 1990s.

The official said Bangladesh would stick to its stance, calling for the return of all 900,000 Rohingya refugees now living in the country’s south-eastern border region.

The Myanmar officials who took part in the meeting in Dhaka said they did not have “the mandate” to discuss the fate of the Rohingya refugees who came earlier, he said.

It remains unclear where the Rohingya would go if they did return, since many of their villages have been burnt to the ground.

Last month, Anwar Begum told Reuters she fled Myanmar three times. The first time was to escape a 1978 crackdown, eventually returning the following year. She fled again in 1991 and returned in 1994.

“I don’t want to go back,” the 55-year-old added. “I don’t believe the government. Every time the government agrees we can go back, then we’re there and they break their promise.”

However, the U.N. has urged a “safe, voluntary, dignified and sustainable return of refugees to their area of origin”.

The authorities have tried to reassure fleeing Rohingya that they are now safe in Rakhine, the Global New Light of Myanmar newspaper, a state-backed publication, reported Tuesday. But they want to leave “of their own accord.”

Human rights activists and the Rohingya community have accused the Myanmar Army of trying to force them out of the country with a campaign of arson and targeted killings.

More than half a million Rohingya have fled from a Myanmar military crackdown in Rakhine State launched in late August that has been denounced by the United Nations as ethnic cleansing.

The Myanmar government continues to deny these allegations, saying it is fighting Rohingya “terrorists” who have claimed attacks on the security forces.