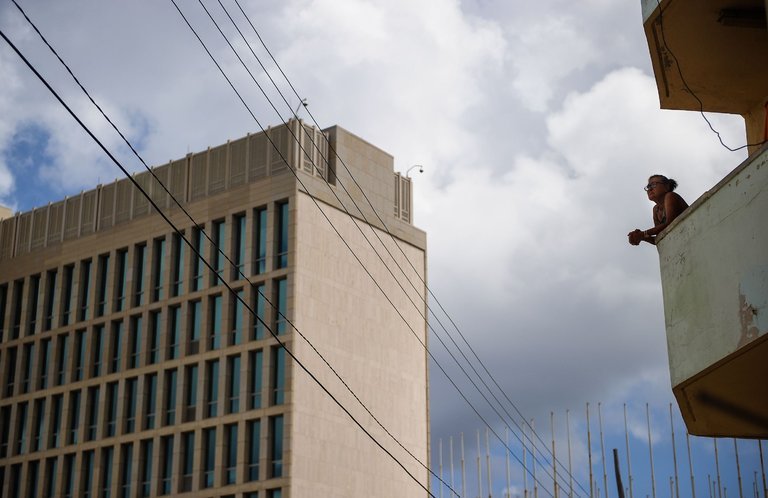 10 Oct 2017 – President Trump has long signaled his desire to reverse President Barack Obama’s normalization of relations with Cuba, so it’s no surprise that his administration has begun to do just that by withdrawing most employees from the United States Embassy in Havana.

But a part of the justification for the move — the reports that embassy employees were victimized by a “sonic attack” that caused a range of physical symptoms — fits a troubling pattern. It’s just the latest example of the way Mr. Trump has attempted to harness vague, unspecified threats to inspire fear and advance his political agenda.

The Associated Press first reported on Aug. 10 that State Department employees had been targeted by these attacks. According to the spokeswoman Heather Nauert, they caused “a variety of physical symptoms.” It was also reported at this time that the State Department had already retaliated for these attacks by expelling two Cuban diplomats from the United States on May 23.

Since then, much of the news coverage of the incident has turned to a discussion of technical questions about sonic weaponry. A few articles quote experts who are skeptical, to put it mildly, but a majority of the coverage has accepted and even reiterated the State Department’s explanation wholesale.

The truth is, the sort of sonic weaponry that might cause the concussions and persistent memory loss that the State Department claimed to have found in its diplomats doesn’t exist, as far as experts in this field know. “Nothing about this story makes any sense to us,” said a marketing director of a firm that manufactures acoustic devices, quoted in Wired. To imagine that such weapons have not only been covertly developed but also were then somehow hidden near the embassy is even more fanciful, for a variety of logistical and technical reasons. The fact-checking site Snopes.com provided a review of scientific data on sound and sonic weapons, concluding that it was false to claim that such weapons could be responsible for what happened to the United States diplomats in Cuba. Yet, this has not stopped the reverberation of sonic-weapon rumors. The press has continued to amplify the story, and the Trump administration has carried on with its narrative, even issuing a Cuba Travel Warning based on the “specific attacks” that it says targeted embassy employees.

The State Department’s explanation — that sound was used to make people sick — is perfectly tailored to frighten us. It plays on the well-established way humans tend to associate sound and illness with hidden, unknowable threats. Mr. Trump as both candidate and president has routinely exploited fears of vaguely defined hidden menaces as a justification for policy and politics.

None of this is to say that no attacks occurred — there may have been chemical exposure, for example. However, not only is the cause unknown (if there is one), but also no evidence of a deliberate attack has been offered.

Sound, despite being a physical material, is often described as intangible, simply because we do not see it. We distrust sound for its invisibility (consider the misery of hearing noisy neighbors but being unsure of what they’re actually doing; consider the meaning of the term “hearsay”), just as we may be drawn to it for its mystery. Even though sound is measurable, we tend to experience it as spectral, as something beyond our rational understanding. It is thus the perfect stand-in for a Cold War-style cunning enemy, who is surely out there, doing something, even though we can never seem to pin him down.

Mr. Trump exploits people’s preconceptions about sound in a manner similar to his exploitation of illness, to signify a hidden, never-quite-graspable threat to the nation. Like the unspecified (and perhaps unverifiable) sonic cause of these health attacks, the reported illnesses are vague and unspecific. Mr. Trump has often turned to illness politics — portraying his opponents as weak, sick and neurotic.

He didn’t invent this political tactic. But he has enthusiastically embraced the approach. Mr. Trump and his campaign encouraged speculation that Hillary Clinton was hiding a secret, degenerative illness (Parkinson’s, traumatic brain injury and epilepsy all circulated as possibilities), which if revealed would make most Americans realize she was not qualified to be president. Of course, these insinuations were most powerful precisely when nothing had been revealed and when speculation could thus fill in the blanks. Media coverage of these charges tended to focus on historical examples of sick presidents or presidential candidates, rather than on how Mr. Trump was deliberately playing upon fears of sickness — that is, engaging in illness politics. In this case, Mr. Trump didn’t invent the story of the attack (it’s relatively clear that something happened at the embassy) but he has latched onto its vague description to raise alarm in a way that’s broad and unsettling enough to provide support for any actions he wants to take in response.

This pattern of suggesting that the United States is under threat from vague and indeterminate dangers — secret illnesses, mysterious sounds — creates a political atmosphere almost miasmic in its effects. There are many facts we do not yet know about the Cuba incident. However, the pattern so far fits Mr. Trump all too well: Raise the volume on a fanciful scary story and tie it to an already desired policy shift in a way that appears to justify that shift. We shouldn’t fall for it.

Lisa Diedrich is a professor of women’s, gender and sexuality studies at Stony Brook University and the author of Indirect Action: Schizophrenia, Epilepsy, AIDS, and the Course of Health Activism.”

Benjamin Tausig is an assistant professor of ethnomusicology at Stony Brook and the author of the forthcoming book Bangkok Is Ringing: Sound, Protest, and Constraint.