In its ongoing occupation of East Jerusalem, Palestinian minors are subjected to many human rights violations before they are detained. 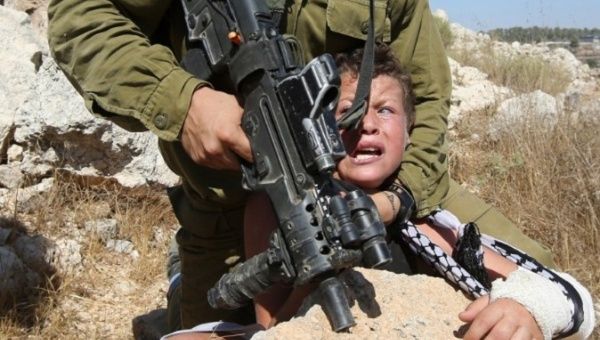 The report titled “Youth in Detention: Preventing Mistreatment of Detained Palestinian Minors in East Jerusalem,” looked at the affidavits of some 60 Palestinian boys detained for throwing stones, teens who were placed in custody from May 2015 to October 2016, a period of marked violence sometimes called the “third intifada.”

It found that Israel does not act in accordance with the law when interrogating and arresting children.

“These teenagers are taken into custody in the middle of the night from their bedrooms and handcuffed,” the report spells. “They are interrogated without proper access to a lawyer or their parents, so that they do not fully understand their rights.”

In additional violations of the law, in 81 percent of the cases from that period, the boys “were handcuffed before being placed in the vehicle that took them to the interrogation site” while “70 percent were kept in restraints during the interrogation sessions.”

“Physical restraints may be used on minors only in exceptional cases, yet the affidavits show that this is the rule rather than the exception,” the NGOs report.

25 percent of the minors also experienced a degree of violence during their interrogation.

The NGOs conclude that Israeli policy in the region is part and parcel of a scheme to get Palestinians to leave the occupied East Jerusalem.

“These practices cannot be viewed as separate from the policy of Israeli authorities to encourage Palestinian residents to leave east Jerusalem,” the NGOs pressed.

“So long as this control continues, Israeli authorities will in all probability continue to treat Palestinians in east Jerusalem as unwanted, less equal people, with all that implies,” they added.

Last year, the Defense for Children International highlighted that “Israel has the dubious distinction of being the only country in the world that systematically prosecutes between 500 and 700 children in military courts each year that lacks fundamental fair trial rights.”