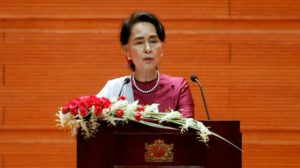 24 Sep 2017 – The verdict issued by the International People’s Tribunal in the Malaysian capital Kuala Lumpur on Friday [22 Sep], which indicted Myanmar’s military as well as its state counsellor Aung San Suu Kyi for war crimes and ethnic persecution in Myanmar, reflected the expectations of the peace-loving people of the world.

The tribunal comprising legal and human rights experts from various countries, passed this verdict based on evidence and the testimony of victims among the Rohingyas and other relevant persons. They also called upon the Myanmar leader as the army chief as well to defend themselves. None of them turned up or felt the need to respond.

The verdict also called for international and regional organisations to enforce an arms embargo on Myanmar, freeze the foreign bank accounts of the government officials involved in the crimes against humanity, and place a ban on their foreign travel.

In the meantime, the UK has suspended its training of members of Myanmar’s military. This is the first step towards an arms embargo. We issue a similar appeal to all countries which have military cooperation with Myanmar. Ethnic cleansing cannot be carried out in the name of protecting the country’s sovereignty.

The People’s Tribunal may not have legal standing, but it has political and international significance. Such a people’s tribunal was set up for the first time, headed by British philosopher Bertrand Russell, during the Vietnam War in the sixties. Later people’s tribunals were set up against such crimes in Latin America, East Timor, Sri Lanka and other countries of the world.

While the People’s Tribunal hearing was underway in Kuala Lumpur, Aung San Suu Kyi delivered a speech in Myanmar in which she virtually defended the army operation against the Rohingyas. It was unimaginable that such atrocities could take place during the rule of this Nobel peace prize winner who sees herself as the symbol of non-violent movement. She simply cannot ignore the verdict of the People’s Tribunal or international opinion.