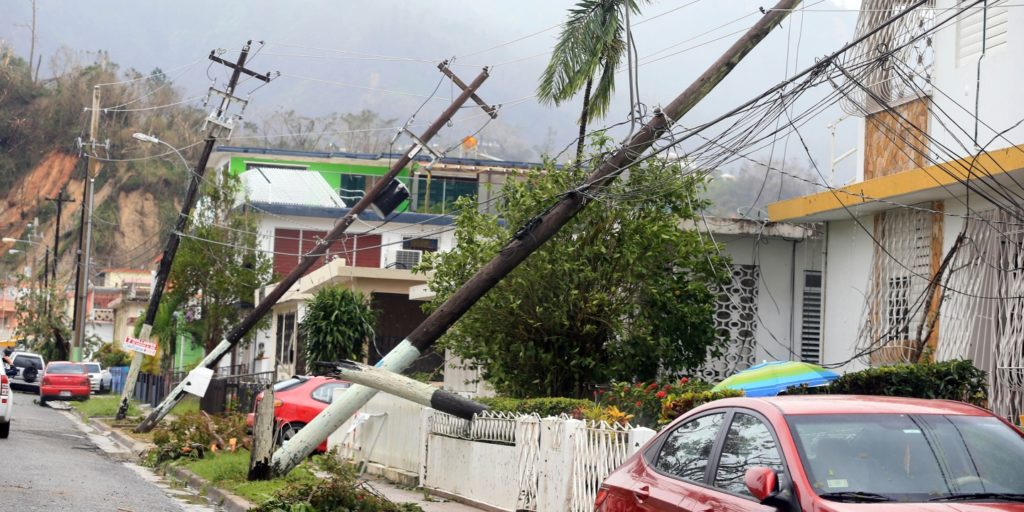 Power lines are knocked over by the winds of Hurricane Maria in Utuado, Puerto Rico on September 21, 2017.
Photo: David Villafane/GFR/AP

28 Sep 2017 – Puerto Rico has rejected a bondholder group’s offer to issue the territory additional debt as a response to the devastation of Hurricane Maria. Officials with Puerto Rico’s Fiscal Agency and Financial Advisory Authority said the offer was “not viable” and would harm the island’s ability to recover from the storm.

The PREPA (Puerto Rico Electric Power Authority) Bondholder Group made the offer on Wednesday, which included $1 billion in new loans, and a swap of $1 billion in existing bonds for another $850 million bond. These new bonds would have jumped to the front of the line for repayment, and between that increased value and interest payments after the first two years, the bondholders would have likely come out ahead on the deal, despite a nominal $150 million in debt relief.

Indeed, the offer was worse in terms of debt relief than one the bondholder group made in April, well before hurricanes destroyed much of the island’s critical infrastructure.

Puerto Rico’s Fiscal Agency and Financial Advisory Authority suggested that profit motive rather than altruism was the bondholder group’s real goal. “Such offers only distract from the government’s stated focus and create the unfortunate appearance that such offers are being made for the purpose of favorably impacting the trading price of existing debt,” the agency said in a statement.

Thomas Wagner of Knighthead Capital Management, one of the members of the bondholder group, admitted as much on Bloomberg TV yesterday, saying “What we’re trying to do is lend where our investors are not disadvantaged.” He added that the loan could be a “win-win” for the utility and the bondholders, “where the capital is not expensive.”

If the idea was to increase the value of PREPA bonds, that hasn’t really happened. The bonds were trading at 43.4 cents on the dollar Wednesday according to Bloomberg. Prices were at 52.5 cents in late August.

Hurricane Maria, and Irma before it, left Puerto Rico in shambles, particularly the electric utility. The island’s 3.4 million residents were without power in the immediate aftermath of the storm, and most continue without power today. PREPA has limited ability to restore the grid, given the island’s cash-strapped status.

Creditor groups should “refrain from making unsolicited financing offers at the expense of the people of Puerto Rico,” the fiscal agency said.

Despite growing calls for debt relief, no bondholder has said they would supply it in the days following the storm, nor have creditor lawsuits been withdrawn. However, David Tepper, the hedge fund manager behind Appaloosa LP, did pledge $3 million for hurricane relief from his family charity and the hedge fund. The money would go to Feeding America, a food bank network.

Tepper’s Appaloosa LP is the only non-bank creditor to so much as publicly donate to disaster recovery efforts. Three banks who hold Puerto Rican debt have donated $1.25 million.

Goldman Sachs – Gave $500,000 to “organizations assisting in immediate search, clean-up and recovery efforts” in the Caribbean after Hurricane Irma.

Scotiabank – gave $500,000 for Hurricane Irma relief in the Caribbean.

Whitebox Advisors – “We have a policy of not discussing Puerto Rico or any securities in which we are involved.”