Shifting Blame as US Agenda Unfolds in Myanmar 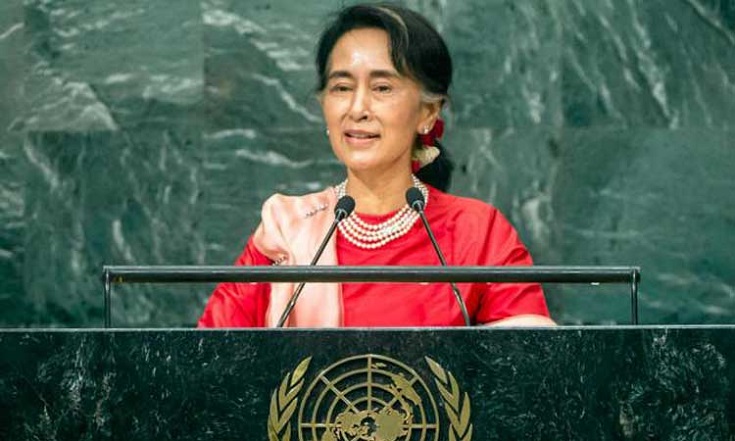 25 Oct 2017 – As violence continues to unfold in Myanmar’s western Rakhine state against the nation’s Rohingya ethnic minority, the agenda driving the conflict is likewise unfolding in a more transparent and direct manner.

As was predicted – the US is shifting blame away from the US-backed client regime headed by Aung San Suu Kyi and her National League of Democracy (NLD) party the US installed into power in 2015 – and toward Myanmar’s independent institutions, including the nation’s still powerful military.

US Secretary of State Rex Tillerson in a recent talk before the Center for Strategic and International Studies in Washington D.C. (PDF) laid the blame squarely on Myanmar’s military, claiming:

…we’re extraordinarily concerned by what’s happening with the Rohingya in Burma. I’ve been in contact with Aung San Suu Kyi, the leader of the civilian side of the government. As you know, this is a power-sharing government that has – that has emerged in Burma. We really hold the military leadership accountable for what’s happening with the Rakhine area.

More than 40 lawmakers urged the Trump administration on Wednesday to reimpose U.S. travel bans on Myanmar’s military leaders and prepare targeted sanctions against those responsible for a crackdown on the country’s Rohingya Muslim minority.

And Freedom House – a subsidiary of the US government and corporate-funded National Endowment for Democracy (NED) – would also publish a piece titled, “Does Democracy’s Toehold in Myanmar Outweigh the Lives of the Rohingya?,” shifting the blame away from the very regime it worked for decades to put in power, and target Myanmar’s military.

In less than two months, more than half a million Rohingya have fled to neighboring Bangladesh to escape the destruction of entire settlements, systematic rape, and the mass slaughter of men, women, and children. This horrendous violence is perpetrated by the military, with assistance from elements of the local Rakhine Buddhist population.

It is clear that the confined nature of Myanmar’s ongoing Rohingya crisis will not lead to the same type of nationwide militancy observed in Syria. It is also clear that the United States is likewise confining its condemnation for the violence not to the ultra-violent elements that it cultivated under Suu Kyi’s political movement for decades, but on the military who often stood between Rohingya communities and violent onslaughts.

The pressuring and weakening first, then either co-opting or overthrowing of Myanmar’s current military leadership under the pretext of the current crisis will invite a larger and expanding US and European role in Myanmar’s internal affairs. Secretary Tillerson alluded to precisely that in his recent remarks, claiming:

And so we have been asking for access to the region. We’ve been able to get a couple of our people from our embassy into the region so we can begin to get our own firsthand account of what is occurring. We’re encouraging access for the aid agencies – the Red Cross, the Red Crescent – U.N. agencies to – so we can at least address some of the most pressing humanitarian needs, but more importantly so we can get a full understanding of what is going on.

Someone – if these reports are true, someone is going to be held to account for that. And it’s up to the military leadership of Burma to decide what direction do they want to play in the future of Burma, because we see Burma as an important emerging democracy, but this is a real test.

With US ally Saudi Arabia fueling a militancy under the guise of a Rohingya “resistance,” the US will also be able to justify military aid, joint-operations, and even permanent US military facilities – however meager – that will present a serious obstacle to Chinese influence in the nation and in the region. It will also be an obstacle that once erected, will be difficult to dismantle as America’s enduring and unwanted military presence in the Philippines is proving to be.

What Freedom House in its aforementioned report intentionally omits is that “the local Rakhine Buddhist population” it refers to is actually part of a much larger political – not religious – network that had fed saffron-clad “monks” onto the streets for pro-Suu Kyi protests in 2007 and which has systematically thwarted efforts by the military-led government before Suu Kyi’s rise to power to begin the process of granting Rohingya minorities proper legal and political status within Myanmar.

It is also a political network that has systematically abused, brutalized, and driven Myanmar’s Rohingya population first from their homes and businesses into camps, then from camps to abroad in neighboring nations including Bangladesh and Thailand.

While attempts to compare Myanmar’s crisis to ongoing conflict driven by US-backed regime change in Syria – it is clear that Myanmar’s crisis is more comparable to the US occupation of Afghanistan minus the presence (for now) of US troops.

While the United States and its European partners control Myanmar’s civilian government, the US is attempting to divide and weaken the Myanmar state to corrode independent institutions still beyond Wall Street and Washington’s control, hinder the central government from achieving any sort of independence itself, as well as create a pretext  for an initial and then expanded presence of US missions – economically, diplomatically, and militarily – in Myanmar.

The goal – as it is in Afghanistan – is to disrupt, undermine, and ultimately overturn progress China and other alternative centers of global power have made in the two nations. In particular, the highly confined violence in Myanmar’s Rakhine state is precisely where China sought to establish and use one of its One Belt, One Road (OBOR) logistical hubs.

Through a large US State Department and European-funded network of faux-nongovernmental organizations (NGOs),Western-backed opposition parties, and likewise Western-backed street fronts, Myanmar’s current client regime was successfully installed into power after general elections in 2015.

Prominent opposition party, the National League for Democracy (NLD) assumed power of the government but maintained little control over the nation’s independent military.

The NLD’s party leader, Aung San Suu Kyi, literally created a new political office for herself to occupy as defacto “head of state.” Under Myanmar’s constitution Suu Kyi was barred from holding high offices in the nation’s political system due to her marriage to a foreign spouse – a British man – and because her children hold dual UK-Myanmar citizenship. Suu Kyi herself received a foreign education and worked within Western institutions including the United Nations in the US before returning to Myanmar to engage in domestic politics.

Her entry into politics and her ascension into power has been openly funded and backed by the United States, former colonial ruler the United Kingdom, and a long list of European collaborators, for decades.

Many senior positions within Myanmar’s ruling regime are held by likewise products of extensive US funding, training, indoctrination, and support, including the current Minister of Information Pe Myint.

Just as the US controls the government in Kabul, Afghanistan, it controls the civilian leadership in Naypyidaw, Myanmar. And just as the US perpetuates the threat of terrorism in Afghanistan as a pretext for the permanent US military occupation of the Central Asian state, the US and its Saudi allies are attempting to use the current Rohingya crisis as a vector to introduce a foreign-funded militancy as a pretext first for joint “counter-terrorism” cooperation with the government of Myanmar, and then the permanent positioning of US military assets in a Southeast Asian state that directly borders China – a long-term goal of US policymakers stretching back decades.

It is expected that the military of Myanmar will come under increasing pressure, targeted sanctions, and outright threats until it capitulates, collapses, or manages to overcome foreign influence and the client regime serving as a vector and facilitator for them.

Meanwhile, Suu Kyi’s regime will continue being granted relative impunity across the West despite the fact that it is her own support base carrying out anti-Rohingya violence. The crisis will be leveraged to thwart China’s economic inroads and prop up a burgeoning US-European diplomatic and military presence in the country.

Voices across the media exposing US plans will make it increasingly difficult for the US and its partners to maneuver in Myanmar and give counterbalancing forces further leverage in frustrating and rolling them back.