The Catalan Crisis Is Not Just about Nationalism 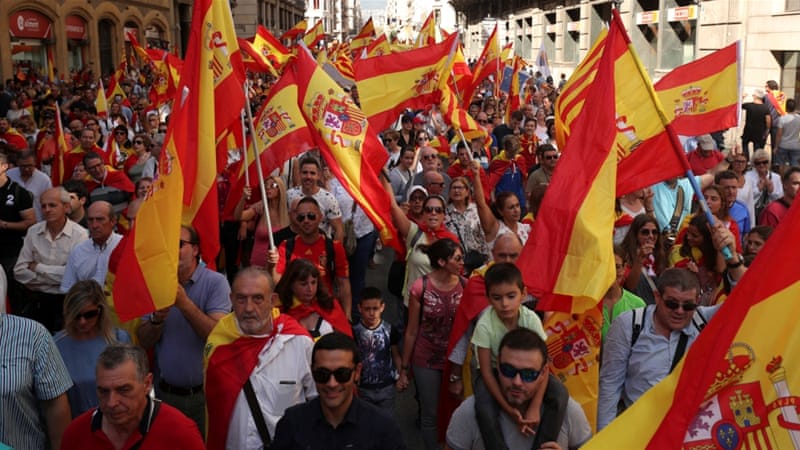 19 Oct 2017- This is a difficult year for Spain. First, the prime minister, Mariano Rajoy, had to appear in court because of corruption charges levelled against his party; then Barcelona suffered a bloody terrorist attack; and now a referendum for the independence of Catalonia has plunged the nation into a political crisis that led to Spanish police beating up voters and Madrid threatening to revoke Catalonia’s autonomy.

Article 155, which enables the central government to do so, is rather vague. We still do not know whether applying it entails the dissolution of the Catalan government, taking control of the public security or calling for regional elections. But the imprisonment of two pro-Catalan independence leaders earlier this week indicates we are heading for serious trouble.

What is important to understand now is that there is more than just blind nationalism in the Catalan impasse, despite what Madrid and Brussels want us to believe. The Catalan call for independence should not be discredited; it is the rightful demand of millions of Catalans. But one must wonder why most articles about this crisis focus exclusively on the historical roots of Catalonian statehood, free citizens’ democratic right to vote, and the inclusive character of Catalonia’s nationalism, which is open to foreigners.

As noble as these historical and democratic arguments are, it is important to emphasise, as Owen Jones rightly pointed out, that “Catalonia cannot be understood in isolation. Here is another manifestation of the crisis enveloping the western world”. This is a crisis of governance in which citizens no longer trust their governments and governments have turned their backs on the people. Why?

OPINION – What’s next for Catalonia: Confrontation or dialogue? by Rafa Perez Bel

The new geopolitical balances that emerged after 9/11 and the financial meltdown of 2008 have put to an end Francis Fukuyama’s happy dream of a global liberal democracy where everything is possible. Instead, this dream turned out to be a nightmare considering the sacrifices (wars, austerity measures, indiscriminate surveillance) that liberal democracies impose on the world. Unfortunately, neither Europe nor the United States has put forward policies to resist the reality this crisis has imposed. There aren’t even signs of improvement: newly created jobs are almost all precarious, and most policy reforms are designed to cut social benefits.

International financial institutions like the International Monetary Fund continue to call for the reduction of bargaining power of workers, cuts in healthcare, social security and state employment. No wonder that in Spain, unemployment (at 18.6 percent) is almost double the eurozone average.

As we’ve seen over the past few years, these liberal reforms “to overcome the crisis” have triggered very different political responses throughout Europe, from Syriza’s new progressive left in Greece to Farage’s right-wing xenophobic populism in Britain and a surge of civic nationalism in Scotland and Catalonia. The case of Catalonia is interesting not only because it is the richest region of Spain (with 7.5 million people, it draws more than a third of Spain’s foreign investment, generates a third of its exports, and is responsible for 20 percent of Spain’s gross domestic product) but also because it is already governed autonomously and is determined to join the EU.

Whereas most countries blamed the EU for the social and economic inequalities and government austerity measures, for Catalan politicians these were primarily Madrid’s fault. Artur Mas, a previous president of the Catalonian Generalitat, explained that the Spanish government forced him to implement austerity cuts that are “impossible to meet without seriously affecting some basic elements of the welfare state.”

Other former presidents of the Catalan government were cautious when blaming Madrid for unfair taxes or other diktats from above, but Mas (a neoliberal) saw an opportunity to promise change, prosperity, and freedom in a new Catalan state independent from Spain and its outdated constitution. This explains why the nationalist alliance Junts pel Si (Together for yes) that he created with other politicians is made up of forces from both the left and the right.

The current Catalan President Carles Puigdemont refused to explicitly clarify whether he declared independence after the referendum of October 1. His goal is to force Rajoy’s Madrid government to begin a fruitful dialogue in order to reach an agreement on the region’s independence.

But Madrid, as Pepe Escobar said, “in effect subscribes to only two priorities: dutifully obey EU austerity diktats, and crush by all means any regional push for autonomy.” This is probably why Rajoy’s government made it easier for firms to relocate, passing a law that allows companies to shift their legal address more quickly; more than 700 (including banks, multinationals, and publishers) have decided to move so far from Catalonia.

The fact that the EU unconditionally supports the Spanish prime minister’s policies towards the Catalonia impasse is an indication it cannot afford another Brexit. As President Jean-Claude Juncker said: “If we allow Catalonia – and it is not our business – to separate, others will do the same.” Although First Vice President Frans Timmermans condemned Spanish police brutality during the referendum, he also said that “it is a duty for any government to uphold the law, and this sometimes does require the proportionate use of force.”

Those of us who were in Barcelona that day can testify that there was nothing “proportionate” in the police violence except that its proportions made it imperative to call for Rajoy‘s resignation. As we can see, this crisis was triggered by more than just nationalism; it is also matter of governance in the “age of anger”.

Santiago Zabala is ICREA research professor of philosophy at the Pompeu Fabra University in Barcelona.