The Facts about U.S. War on Vietnam

Following its screening on ITV, Walter Annenberg, the American ambassador to London, complained to the ITA, the commercial channel’s regulator.

Do You Remember Vietnam?

In 1995’s ‘Vietnam: The Last Battle’, Pilger returns to Vietnam to review those twenty years, seeking to rescue something of Vietnamese past and present from Hollywood images which pitied the invader while overshadowing one of the most epic struggles of the 20th century.

And with the embargo on the country now lifted by President Clinton, he describes Vietnam’s latest battle against the economic plunder of the country by the United States and other powerful countries.

The Real First Casualty of War

This is an abridged version of an address, “Reporting War and Empire”, by John Pilger at Columbia University, New York, in company with Seymour Hersh, Robert Fisk and Charles Glass.

Censorship by journalism is virulent in Britain and the US – and it means the difference between life and death for people in faraway countries.

During the 1970s, I filmed secretly in Czechoslovakia, then a Stalinist dictatorship. The dissident novelist Zdenek Urbánek told me, “In one respect, we are more fortunate than you in the west. We believe nothing of what we read in the newspapers and watch on television, nothing of the official truth. Unlike you, we have learned to read between the lines, because real truth is always subversive.”

This acute scepticism, this skill of reading between the lines, is urgently needed in supposedly free societies today. Take the reporting of state-sponsored war. The oldest cliché is that truth is the first casualty of war. I disagree. Journalism is the first casualty. Not only that: it has become a weapon of war, a virulent censorship that goes unrecognised in the United States, Britain and other democracies; censorship by omission, whose power is such that, in war, it can mean the difference between life and death for people in faraway countries, such as Iraq.

As a journalist for more than 40 years, I have tried to understand how this works. In the aftermath of the US war in Vietnam, which I reported, the policy in Washington was revenge, a word frequently used in private but never publicly. A medieval embargo was imposed on Vietnam and Cambodia; the Thatcher government cut off supplies of milk to the children of Vietnam. This assault on the very fabric of life in two of the world’s most stricken societies was rarely reported; the consequence was mass suffering.

It was during this time that I made a series of documentaries about Cambodia. The first, in 1979, Year Zero: the silent death of Cambodia, described the American bombing that had provided a catalyst for the rise of Pol Pot, and showed the shocking human effects of the embargo. Year Zero was broadcast in some 60 countries, but never in the United States. When I flew to Washington and offered it to the national public broadcaster, PBS, I received a curious reaction. PBS executives were shocked by the film, and spoke admiringly of it, even as they collectively shook their heads. One of them said: “John, we are disturbed that your film says the United States played such a destructive role, so we have decided to call in a journalistic adjudicator.”

The term “journalistic adjudicator” was out of Orwell. PBS appointed one Richard Dudman, a reporter on the St Louis Post-Dispatch, and one of the few westerners to have been invited by Pol Pot to visit Cambodia. His despatches reflected none of the savagery then enveloping that country; he even praised his hosts. Not surprisingly, he gave my film the thumbs-down. One of the PBS executives confided to me: “These are difficult days under Ronald Reagan. Your film would have given us problems.”

The lack of truth about what had really happened in south-east Asia – the media-promoted myth of a “blunder” and the suppression of the true scale of civilian casualties and of routine mass murder, even the word “invasion” – allowed Reagan to launch a second “noble cause” in central America. The target was ano-ther impoverished nation without resources: Nicaragua, whose “threat”, like Vietnam’s, was in trying to establish a model of development different from that of the colonial dictatorships backed by Washington. Nicaragua was crushed, thanks in no small part to leading American journalists, conservative and liberal, who suppressed the triumphs of the Sandinistas and encouraged a specious debate about a “threat”.

The tragedy in Iraq is different, but, for journalists, there are haunting similarities. On 24 August last year, a New York Times editorial declared: “If we had all known then what we know now, the invasion [of Iraq] would have been stopped by a popular outcry.” This amazing admission was saying, in effect, that the invasion would never have happened if journalists had not betrayed the public by accepting and amplifying and echoing the lies of Bush and Blair, instead of challenging and exposing them.

We now know that the BBC and other British media were used by MI6, the secret intelligence service. In what was called “Operation Mass Appeal”, MI6 agents planted stories about Saddam Hussein’s weapons of mass destruction – such as weapons hidden in his palaces and in secret underground bunkers. All these stories were fake. But this is not the point. The point is that the dark deeds of MI6 were quite unnecessary. Recently, the BBC’s director of news, Helen Boaden, was asked to explain how one of her “embedded” reporters in Iraq, having accepted US denials of the use of chemical weapons against civilians, could possibly describe the aim of the Anglo-American invasion as to “bring democracy and human rights” to Iraq. She replied with quotations from Blair that this was indeed the aim, as if Blair’s utterances and the truth were in any way related. On the third anniversary of the invasion, a BBC newsreader described this illegal, unprovoked act, based on lies, as a “miscalculation”. Thus, to use Edward Herman’s memorable phrase, the unthinkable was normalised.

Such servility to state power is hotly denied, yet routine. Al-most the entire British media has omitted the true figure of Iraqi civilian casualties, wilfully ignoring or attempting to discredit respectable studies. “Making conservative assumptions,” wrote the researchers from the eminent Johns Hopkins Bloomberg School of Public Health, working with Iraqi scholars, “we think that about 100,000 excess deaths, or more, have happened since the 2003 invasion of Iraq . . . which were pri marily the result of military actions by coalition forces. Most of those killed by coalition forces were women and children . . .” That was 29 October 2004. Today, the figure has doubled.

Language is perhaps the most crucial battleground. Noble words such as “democracy”, “liberation”, “freedom” and “reform” have been emptied of their true meaning and refilled by the enemies of those concepts. The counterfeits dominate the news, along with dishonest political labels, such as “left of centre”, a favourite given to warlords such as Blair and Bill Clinton; it means the opposite. “War on terror” is a fake metaphor that insults our intelligence. We are not at war. Instead, our troops are fighting insurrections in countries where our invasions have caused mayhem and grief, the evidence and images of which are suppressed. How many people know that, in revenge for 3,000 innocent lives taken on 11 September 2001, up to 20,000 innocent people died in Afghanistan?

In reclaiming the honour of our craft, not to mention the truth, we journalists at least need to understand the historic task to which we are assigned – that is, to report the rest of humanity in terms of its usefulness, or otherwise, to “us”, and to soften up the public for rapacious attacks on countries that are no threat to us. We soften them up by dehumanising them, by writing about “regime change” in Iran as if that country were an abstraction, not a human society. Hugo Chávez’s Venezuela is currently being softened up on both sides of the Atlantic. A few weeks ago, Channel 4 News carried a major item that might have been broadcast by the US State Department. The reporter, Jonathan Rugman, the programme’s Washington correspondent, presented Chávez as a cartoon character, a sinister buffoon whose folksy Latin ways disguised a man “in danger of joining a rogues’ gallery of dictators and despots – Washington’s latest Latin nightmare”. In contrast, Condoleezza Rice was given gravitas and Donald Rumsfeld was allowed to compare Chávez to Hitler.

Indeed, almost everything in this travesty of journalism was viewed from Washington, and only fragments of it from the barrios of Venezuela, where Chávez enjoys 80 per cent popularity. That he had won nine democratic elections and referendums – a world record – was omitted. In crude Soviet flick style, he was shown with the likes of Saddam Hussein and Muammar Gaddafi, though these brief encounters had to do with Opec and oil only. According to Rugman, Venezuela under Chávez is helping Iran develop nuclear weapons. No evidence was given for this absurdity. People watching would have no idea that Venezuela was the only oil-producing country in the world to use its oil revenue for the benefit of poor people. They would have no idea of spectacular developments in health, education, literacy; no idea that Venezuela has no political jails – unlike the United States.

So if the Bush administration moves to implement “Operation Bilbao”, a contingency plan to overthrow the democratic government of Venezuela, who will care, because who will know? For we shall have only the media version; another demon will get what is coming to him. The poor of Venezuela, like the poor of Nicaragua, and the poor of Vietnam and countless other faraway places, whose dreams and lives are of no interest, will be invisible in their grief: a triumph of censorship by journalism.

It is said that the internet offers an alternative, and what is wonderful about the rebellious spirits on the worldwide web is that they often report as many journalists should. They are mavericks in the tradition of muckrakers such as Claud Cockburn, who said: “Never believe anything until it has been officially denied.” But the internet is still a kind of samizdat, an underground, and most of humanity does not log on, just as most of humanity does not own a mobile phone. And the right to know ought to be universal. That other great muckraker, Tom Paine, warned that if the majority of the people were being denied the truth and ideas of truth, it was time to storm what he called the “Bastille of words”. That time is now. 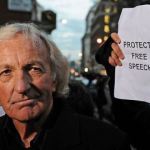