Where Do 50 Million Tonnes a Year of Toxic E-Waste Go? 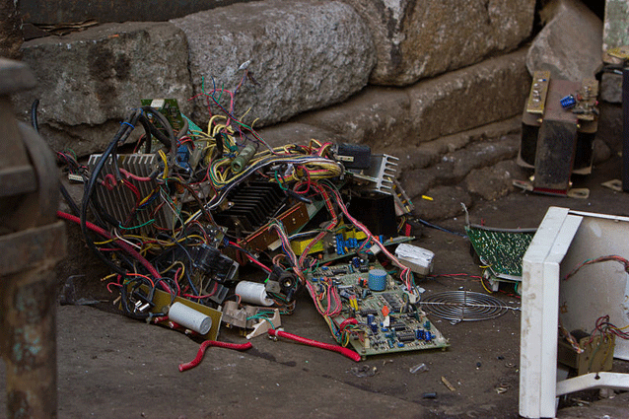 27 Sep 2017 – Each year, the electronics industry generates up to 41 million tonnes of e-waste, but as the number of consumers rises, and the lifespan of devices shrinks in response to demand for the newest and best, that figure could reach 50 million tonnes this year, according to specialised studies.

Of all these tonnes of noxious waste, a staggering 60-90 per cent of e-waste –worth nearly 19 billion dollars– is illegally traded or dumped, often with the involvement of transnational criminal gangs, a UN Environment Programme (UNEP) research had already warned a couple of years ago.

West Africa has been reported by the UN Office on Drugs and Crime (UNODC) to be a major destination for electronic waste, while some Asian countries are also recipients of millions of tonnes of these toxic materials, sometimes as part of so-called trade free agreements with Western countries.

According to the research, e-waste often contains hazardous materials, which pose risks to human health and the environment, especially in developing countries.

One of Fastest Growing Waste Streams

E-waste is one of the fastest growing waste streams in developed as well as in developing countries, reports the Global Partnership on Waste Management.

Due to the fact that the life span of computers has dropped in developed countries from six years in 1997 to just two years in 2005, and mobile phones have a lifespan of even less than two years, the amount of generated e-waste per year grows rapidly, it adds.

“This has a major impact on developing countries as loopholes in the current {European Commission} Waste Electrical & Electronic Equipment (WEEE) Directives allow the export of e-waste from developed to developing countries (70 per cent of the collected WEEE ends up in unreported and largely unknown destinations).”

E-waste is one of the fastest growing waste streams in developed as well as in developing countries.
Credit: UNEP

According to the Global Partnership on Waste Management, inappropriate methods like open burning, which are often used by the informal sector in developing countries to recover valuable materials, have heavy impacts on human health and the environment.

“Electronic goods are increasing exponentially in number, variety and complexity, and all of them include both valuable and hazardous materials,” said Keith Alverson, head of the UNEP-hosted International Environmental Technology Centre, which looks at ways to increase recycling and handle waste in a more sound manner.

“The challenge of re-using, recycling and properly disposing of electronic waste is already enormous, and will grow – be it in individual households, in the private sector or in countries around the world. We need to think carefully about, and implement solutions for, e-waste as we continue to benefit more and more from electronic goods and services.”

“It is illegal to export e-waste, but extensive smuggling networks classify the waste as second-hand goods and dump it in places like Ghana, India, Pakistan and Brazil,” said Dr. Christian Nellemann, head of the Rapid Response Unit at the Rhipto-Norwegian Center for Global Analyses and author of UNEP’s e-waste report.

“Tricks include declaring waste batteries as plastic or mixed metal scrap, and cathode ray tubes and computer monitors as metal scrap. Both small and large-scale smuggling techniques can be seen all over the world, from organized truck transport across Europe and North America to the use of major smuggling hubs in South Asia, including widespread container transport by sea.”

Insufficient control over waste removal is another loophole exploited by criminals, who collect payments for the safe disposal of waste, which they later dump or recycle unsafely, the study warns.

According to the report, the illegal dumping of waste in developing countries is where health problems start to creep in. Inappropriate methods like open burning are often used by the informal sector to recover valuable materials, bringing heavy impacts on human health and the environment.

Children in developing countries are exposed as family members try to recycle at home or are forced to recycle themselves, or simply by living or going to school close to dumps. They are especially vulnerable to the health risks as their bodies are still developing, the report adds.

“Key to solving a lot of these problems – and ensuring that we don’t run out of metals in decades to come, is better, more-formalised recycling.”

According to research by the International Resource Panel (IRP), recycling rates have been consistently low: less than one-third of some 60 metals studied have an end-of-life recycling rate above 50 per cent and 34 elements are below one per cent recycling. This presents a valuable opportunity to reduce environmental degradation, energy and water use, and cut down on health impacts by doing it right.

Solutions to combat illegal and unsustainable handling of e-waste are emerging. Recovering valuable metals and other resources locked inside electronic products, for example, can reduce the amount of e-waste produced, diminishing pressure on the environment, creating jobs and generating income.

According to the IRP, designers must look at making materials such as rare earth metals in products easily recoverable at their end of use – including in green tech such as solar panels and wind turbine magnets. Binding agreements on classification of waste through the conventions will also be vital to prevent the dumping of waste in developing countries.

The Global Partnership on Waste Management also looks at improving sound management of e-waste in developing countries, an area of work led by the International Telecommunication Union.

“Mountains of e-waste are indeed growing across the globe, but this waste can be turned into a valuable resource that will protect human health and ensure humanity uses the planet’s increasingly strained resources.”

The United Nations might be right –and at least realistic– when it says that it is impossible to imagine the modern world without electronics. In fact, it seems to be already too late to think of such a hypothetical scenario.

Smartphones that serve as umbilical cords to the digital world; fridges and air conditioning systems that keep our food fresh and homes cool, as the UN Environment Programme says, as well as computers, blenders, games consoles, electric cars, solar panels.

“These inventions have undoubtedly transformed our lives for the better – allowing us access to information and resources, instant communication and freeing up our time so we can get on with doing things we enjoy.”

But the UN is definitely right when it also says that every silver lining has a cloud, and in this case, it’s a big one: e-waste.