The control of food importation into Yemen is being used as a weapon of war, seemingly by all sides. 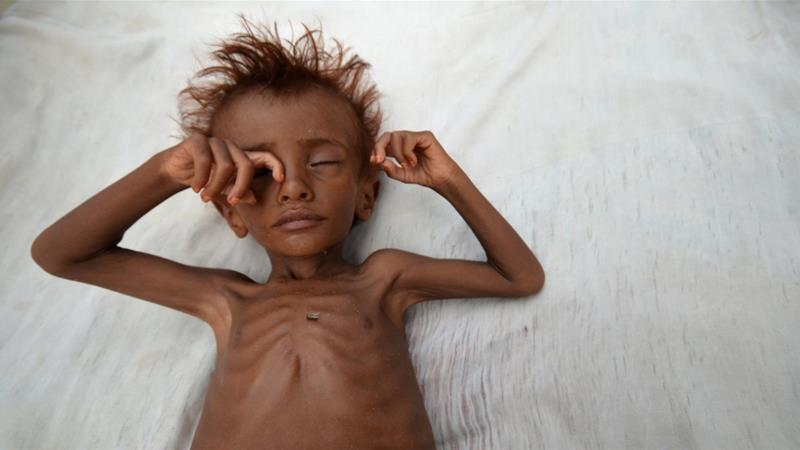 A photograph from September 2016 shows a malnourished boy laying on a bed outside his family’s hut in Hodaida, Yemen. [Abduljabbar Zeyad/Reuters]

2 Oct 2017 – The last two decades have seen a significant expansion of international, regional and domestic accountability mechanisms for an array of international crimes and a variety of forgotten victims. Much of this activity has been focused on the conduct of senior military and political leaders who control or significantly contribute to excesses on the battlefield. However, as is becoming clear, this focus does not adequately confront the scale or scope of victims living in the path of armed conflict or under the yoke of brutalising regimes.

This year has seen the resurgence of famine. South Sudan is enduring the first famine to be declared globally for six years. Nigeria, Somalia and Yemen are all on the brink of famine. In each, deliberate political and military action has contributed to the resulting death and injury of thousands of innocent civilians, demanding that serious consideration be given to prosecuting those responsible. Yemen is emblematic of the problem and a may provide a backdrop for the development of the potential remedy proffered by a more imaginative approach to the prosecution of those who engineer, or fail to act to prevent, mass starvation.

Yemen has been described as the “war the world forgot” eclipsed by Syria and complicated by a Saudi-led coalition supported by the United States, the United Kingdom and France. The resulting humanitarian disaster features a famine of cataclysmic proportions. The word “famine” evokes images of dusty pot-bellied children and the wrath of nature. However, the reality is that this is less nature’s cruelty and more mans: “starvation” often more accurately reflects these wholly human-made and preventable catastrophes, where failed diplomacy and ostensible military objectives collide.

While perhaps viewed as collateral to the conflict, political and military actors could have easily predicted this crisis and taken preventative measures to avoid. Yemen is almost entirely dependent upon imports for its staple commodities. Prior to the conflict, approximately 80-90 percent of food was imported, principally at the Red Sea port of al-Hudaida, which quickly became the epicentre of the fighting. Eventually, coalition forces imposed a UN Security Council-approved blockade on the port in March 2015.

While the blockade contains an exemption for food, little has been done to ensure the continued functioning of the port. For example, the port has been aerially bombed and there are reports that the Houthi rebels have destroyed key infrastructure at the port causing delays in the importation of food with foreseeable and fatal consequences. In addition, food and humanitarian supplies reportedly encounter laborious inspection procedures and, in some cases, are reportedly being withheld or destroyed.

This blockade and the attacks on the port are contributing to, or causing, the famine in Yemen. Some 17 million are food-insecure (defined as inconsistent access to adequate food supplies), and 6.8 million facing famine conditions. Put another way, more people are facing famine than the present population of Kuwait.

Justice demands that a variety of legal avenues be pursued to hold those responsible for a famine accountable. The prohibition of starvation as a method of warfare is criminalised under customary international law governing conflict, the Geneva Conventions, and the Rome Statute. Despite having these legal facilities available, there have been only two known prosecutions- both domestic and conducted in absentia – that have entered convictions for starvation as a war crime and a crime against humanity: the first in Croatia and the second in Ethiopia. Given the frequency with which famine occurs as a consequence of conflict, taking such a passive approach to famine does not respect a state’s duty to mount effective prosecutions of serious violations of international humanitarian law.

OPINION: Nobody will win the war in Yemen

There have been several steps already taken in considering accountability in Yemen. For example, Yemen’s exiled President Hadi established a National Commission of Inquiry in September 2015 mandated to investigate the alleged violations of international human rights and humanitarian law. However, it failed to obtain the support of all concerned parties and was unable to operate in parts of Yemen. In August 2017, an open letter was sent to the UN Human Rights Council with 62 signatories from non-governmental organisations around the world, calling for the creation of an independent body to look into the violations of international human rights and humanitarian laws in Yemen.

Prosecuting famine as a war crime faces distinct and sometimes significant obstacles. First, blockades that cause starvation are not prohibited so long as their purpose is to achieve, and is proportionate to, a military objective. Second, the causal link between action and outcome may not be clear enough to establish beyond reasonable doubt that remote military or political actors are responsible.

READ MORE: ‘Women like us’: On Women and war in Yemen

Yemen faces both these obstacles. First, the blockade is purportedly pursuant to the legitimate military objective of prohibiting the illegal supply of arms to rebel groups like the Houthis. Second, the evidentiary problems of establishing individual criminal responsibility in a country which has always depended, almost entirely, on food imports and has historically endured food insecurity issues are complex. Notwithstanding, amongst the other three famine affected countries, Yemen may offer the clearest set of facts that amount to crimes with which to pursue accountability.

The UN Special Rapporteur has urged the blockade to be lifted in order to prevent starvation. In his view, the blockade was one of the main causes of the humanitarian catastrophe. It is difficult to avoid the conclusion that the control of food importation into Yemen is being used either intentionally or negligently, as a weapon of war, seemingly by all sides. Those responsible should be held accountable as primary perpetrators of, or accessories to, starvation.

Catriona Murdoch is a consultant with Global Rights Compliance and a member of 1 Crown Office Row Chambers in England. Catriona practices international humanitarian and criminal law.

Wayne Jordash QC is a managing partner of Global Rights Compliance LLP a human rights and humanitarian advisory law company specializing in the reform of national systems of accountability to ensure complementarity with international standards.