Afghanistan: From the Ground Up 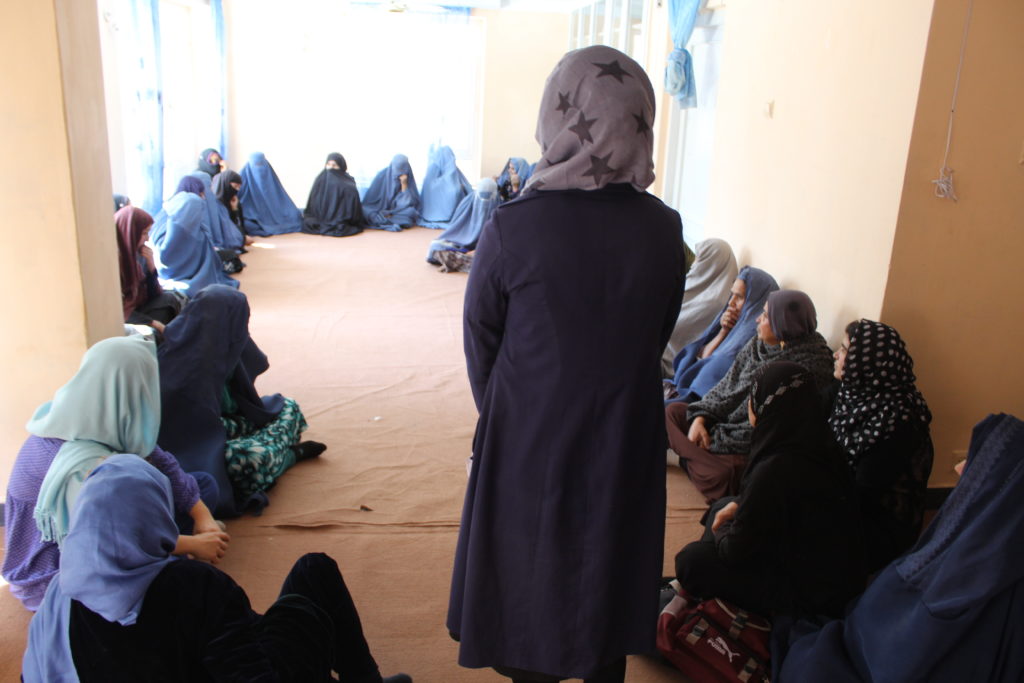 30 Oct 2017 – On a recent Friday at the Afghan Peace Volunteers‘ (APV) Borderfree Center, here in Kabul, thirty mothers sat cross-legged along the walls of a large meeting room. Masoumah, who co-coordinates the Center’s “Street Kids School” project, had invited the mothers to a parents meeting. Burka-clad women who wore the veil over their faces looked identical to me, but Masoumah called each mother by name, inviting the mothers, one by one, to speak about difficulties they faced. From inside the netted opening of a burka, we heard soft voices and, sometimes, sheer despair. Others who weren’t wearing burkas also spoke gravely. Their eyes expressed pain and misery, and some quietly wept. Often a woman’s voice would break, and she would have to pause before she could continue.

“I have debts that I cannot pay,” whispered the first woman

“My children and I are always moving from place to place. I don’t know what will happen.”

“I am afraid we will die in an explosion.”

“My husband is paralyzed and cannot work. We have no money for food, for fuel.”

“My husband is old and sick. We have no medicine.”

“I cannot feed my children.”

“How will we live through the winter?”

“I have pains throughout my whole body.”

“I feel depressed, and I am always worried.”

The mothers’ travails echo across Afghanistan, where “one-third of the population lives below the poverty line (earning less than $2 a day) and a further 50 percent are barely above this.”  Much of the suffering voiced was common: most of the women had to support their families as they moved from house to house, not being able to come up with the rent for a more permanent space, and many women experienced severe body pains, often a result of chronic stress.

Last week, our friend Turpekai visited the Borderfree Center and spoke with dismay about her family’s well having gone dry. Later that morning, Inaam, one of the students in the “Street Kids School,” said that his family faces the same problem. Formerly, wells dug to depths of 20 to 30 meters were sufficient to reach the water table. But now, with the water table dropping an average of one meter a year, new wells must be dug to depths of 80 meters or more. Inflowing refugees create increased demands on the water table in times of drought and so do the extravagant water needs of an occupying military, and the world’s largest fortified embassy, that can dig as deep for water as it wants. Families living on less than $2 a day have little wherewithal to dig deep wells or begin paying for water. The water has been lost to war.

Sarah Ball, a nurse from Chicago, arrived in Kabul one week ago. Together we visited the Emergency Surgical Center for Victims of War, feeling acutely grateful for an opportunity to donate blood and hear an update from one of their logistical coordinators about new circumstances they encounter in Kabul.

In past visits to Kabul, staff at the Emergency Hospital would point happily to their volleyball court, the place where they could find diversion and release from tensions inherent in their life saving work.  Now, as an average of two “mass casualties” happen each week, often involving many dozens of patients severely injured by war, a triage unit has replaced the volleyball court. Kabul, formerly one of the safest places in Afghanistan, has now become one of the most dangerous.

The Taliban and other armed groups have vowed to continue fighting as long as the U.S. continues to occupy Afghan land, to wage attacks on Afghans and supply weapons to the various fighting factions. The United States maintains nine major bases in Afghanistan and many smaller forward operating bases.

Following President Trump’s announcement of an increase in U.S. troops being sent to Afghanistan, the Washington Post reported that “Direct U.S. spending on the war in Afghanistan will rise to approximately $840.7 billion if the president’s fiscal year 2018 budget is approved.”

What on earth have they accomplished?!

Masoumah asked each mother a second question: What are you thankful for? The atmosphere became a little less grim as many of the mothers said they were grateful for their children. Beholding the lively, bright and beautiful youngsters who fill the Borderfree Center each Friday, I could well understand their gratitude. The following day, we joined two dozen young girls living in a squalid refugee camp. Crowded into a small makeshift classroom with a mud floor, our friend Nematullah taught a two-hour class focused on forming peace circles. The little girls were radiant, exuberant and eager for better futures. Nematullah later told us that all their families are internally displaced, many because of war.

I feel deeply moved by the commitment my young friends have made to reject wars and dominance, preferring instead to live simply, share resources, and help protect the environment.

Zarghuna works full-time to coordinate projects at the Border Free Center. She and Masoumah feel passionately committed to social change which they believe will be organized “from the ground up.” I showed Zarghuna a Voices accounting sheet tallying donations entrusted to us for the Street Kids School and The Duvet Project. I wanted to assure her of grass roots support from people giving what they can. “Big amounts of money coming from the U.S. military destroys us,” Zarghuna said. “But small amounts that are given to the people can help change lives and make them a little better.”

Kathy Kelly (kathy@vcnv.org) co-coordinates Voices for Creative Nonviolence. (www.vcnv.org). In Kabul, she is the guest of the Afghan Peace Volunteers (ourjourneytosmile.com).

Anticopyright: Editorials and articles originated on TMS may be freely reprinted, disseminated, translated and used as background material, provided an acknowledgement and link to the source, TMS: Afghanistan: From the Ground Up, is included. Thank you.