Funding Big Pharma to Help with Millions of Addicts They Created

Lining Corporate Pockets, One Way or Another 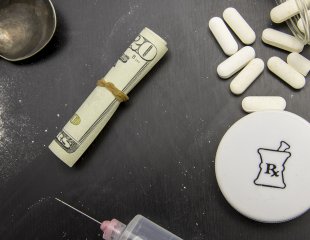 22 Nov 2017 – The editorial did not beat around the bush. After decades of “expanding opioid use by minimizing the dangers of addiction,” Pharma will now receive the reward of taxpayer money to undo what it did and reverse the opioid epidemic, writes the New York Times. Imagine the government giving Big Tobacco our tax dollars to reverse the damage it did pushing cigarettes and you see how obscene this is.

The new public-private partnership between Pharma and the NIH (and supported by both the FDA and DEA) will explore ways to address the opioid crisis such as “nonaddictive painkillers and new treatments for addiction and overdoses.”

Not surprisingly, Pharma likes its reward. J. David Haddox, vice president for policy at Purdue Pharma (who makes OxyContin) appreciates the idea of “converting” the opioid market to abuse-deterrent drugs.

But the CEOs of Pharma’s lobby group, Pharmaceutical Research and Manufacturers of America or PhRMA, and Purdue Pharma do not appreciate the Times’ charges.

There is no reason Pharma shouldn’t be involved in “the long-term solutions” for the opioid crisis writes PhRMA CEO Stephen Ubl, calling Pharma operatives “the best minds in science,” in a letter to the Times. Craig Landau, CEO of Purdue, appreciates the “regulatory framework to incentivize” Pharma to develop post opioid crisis drugs and writes that Pharma cannot “abandon… pain patients,” in a letter to the Times.

The NIH partnership is just the latest example of government greasing opioid Pharma’s palms. On the same day in 2013 that the FDA announced new Vicodin restrictions, it approved hydrocodone bitartrate-based Zohydro with five to 10 times the abuse potential of OxyContin. The next year the FDA approved Tarrginiq ER while admitting it could cause overdoses and euphoria. In 2015, the FDA approved opioids for children as young as 11.

In 2016, Obama signed a Pharma-bought law curtailing DEA powers to regulate large opioid sales which bowed to “deep-pocketed chain pharmacies such as CVS and Walgreens and drug distribution companies like Cardinal Health and McKesson” wrote the New York Times.

How did Pharma foster the opioid addiction? By paying medical groups to change pain condition guidelines so that opioids were the first choice for many conditions. (Notice how pain has become the “fifth vital sign” and medical personnel always ask you now “Are you in pain?” We have Pharma to thank for that.)

Pharma also fostered the epidemic by pushing the long-term use of opioids despite zero studies including the Cochrane Collection showing long-term safety or effectiveness. Finally, Pharma did it by telling doctors and patients that opioids aren’t addictive like the parallel industry Big Tobacco.

A pain guide supported by the American Geriatrics Society and funded by Janssen (which makes Duragesic, Ultram ER and Nucynta) claims that opioids “allow people with chronic pain to get back to work, run, and play sports,” and says that worries patients may get hooked are a “myth.” More than a hundred people a day now die in the U.S. from that myth.

According to investigative reporter John Fauber, half the American Geriatrics Society panel’s experts who revised opioid guidelines in 2009 “had financial ties to opioid companies, as paid speakers, consultants or advisers.” What changes did the experts make to the guidelines? “That over-the-counter pain relievers, such as ibuprofen and naproxen, be used rarely and that doctors instead consider prescribing opioids for all patients with moderate to severe pain,” declared the American Geriatrics Society. The University of Wisconsin’s Pain & Policy Studies Group received $2.5 million from opioid makers, too as the group pushed for––any guesses?––looser opioid use guidelines writes Fauber.

Between 1996 and 2002, Purdue Pharma “funded more than 20,000 pain-related educational programs through direct sponsorship or financial grants and launched a multifaceted campaign to encourage long-term use of [opioid painkillers] for chronic non-cancer pain,“ reports Vox Media. Included in the monetary persuasion was financial support to the American Pain Society, the American Academy of Pain Medicine, the Federation of State Medical Boards, the Joint Commission, pain patient groups, and other organizations, writes Vox, which in turn “advocated for more aggressive identification and treatment of pain, especially use of [opioid painkillers].

Last year, the Los Angeles Times exposed a trove of emails, memos, meeting minutes and sales reports from Purdue Pharma admitting that it falsely marketing OxyContin as a 12-hour med when they knew it was an eight hour med leading the way to overdoses and addiction.

Pharma has got so many people on opioids, an ad for opioid-related constipation ran during the 2016 Super Bowl.

Addiction Medicine–Playing Both Sides of the Street

In the last decade “addiction medicine” has become a boom business with profit margins of over 20 percent. For example, Bain Capital paid $720 million for CRC Health in 2006 and sold it for $1.18 billion to Acadia Healthcare Company Inc. in 2014. Today Acadia boasts 576 behavioral healthcare facilities with approximately 17,300 beds in 39 states.

Unlike traditional “rehab” which de-emphasized prescription drugs and promoted abstinence, current rehab, whether private or taxpayer funded, is an unapologetic Pharma enterprise and profit center. Pharma has recast addiction as a psychiatric condition and unless expensive psychiatric drugs are prescribed, rehab will be not be reimbursed two psychiatrists working in the field have told me. This further raises health care costs and taxes.

Addiction medicine, is, unsurprisingly, enmeshed with Pharma. The American Society of Addiction Medicine (ASAM) received $47,500 from Pfizer  between 2013 and 2016 according to Pfizer reports. It published a consensus statement in the December 2011 Journal of Addictive Medicine titled, “Statement of the American Society of Addiction Medicine Consensus Panel on the Use of Buprenorphine in Office-Based Treatment of Opioid Addiction,” that was supported “by an unrestricted educational grant to ASAM from Reckitt-Benckiser Pharmaceutics Inc, manufacturer of Subutex and Suboxone.” No conflicts there.

Board of directors at the American Academy of Addiction Psychiatry (AAAP) have financial links to Pharma including three who actually serve on drug makers’ speaker boards.

Like the new Pharma/NIH partnership, these Pharma-funded groups also receive our tax dollars. The program for AAAP’s 25th Annual Meeting thanks four government for their financial support: the Center for Substance Abuse Treatment, the Substance Abuse Mental Health Services Administration, the National Institute on Alcohol Abuse and Alcoholism and the National Institute on Drug Abuse.

For opioid addiction, these groups push buprenorpine, marketed as Suboxone, selling for $560 at CVS and $553 at Target for a 30-day supply last year.

Not surprisingly, buprenorpine has its own Pharma marketing group. The National Alliance of Advocates for Buprenorphine Treatment (NAABT), which admits it has “received donations from pharmaceutical companies” says its mission is to “Educate the public about the disease of opioid addiction and the buprenorphine treatment option; help reduce the stigma and discrimination associated with patients with addiction disorders; and serve as a conduit connecting patients in need of treatment to buprenorphine treatment providers.”

Intended to replace opioid/heroin addiction, Suboxone is notoriously difficult to quit and has its own abuse potential. Statistics “show sharp increases in buprenorphine seizures by law enforcement, in reports to poison centers, in emergency room visits for the nonmedical use of the drug and in pediatric hospitalizations for accidental ingestions,” wrote the New York Times.

When Big Tobacco was busted for lying to consumers that its products were neither addictive or deadly, it was forced to pay $206 billion in the 1998 Tobacco Master Settlement Agreement. Provisions include paying states, in perpetuity, for some of the medical costs of people with smoking-related illnesses. When Big Pharma caused a similar scourge it paid nothing. Worse, it is now receiving millions to “fix” the crisis it started by selling even more drugs.

Martha Rosenberg is an investigative health reporter and the author of Born With a Junk Food Deficiency: How Flaks, Quacks and Hacks Pimp the Public Health (Random House).