Myanmar de facto leader conflated illegal migration with terrorism in a keynote speech, adding her voice to the Islamophobia that has justified persecution of the Rohingya. 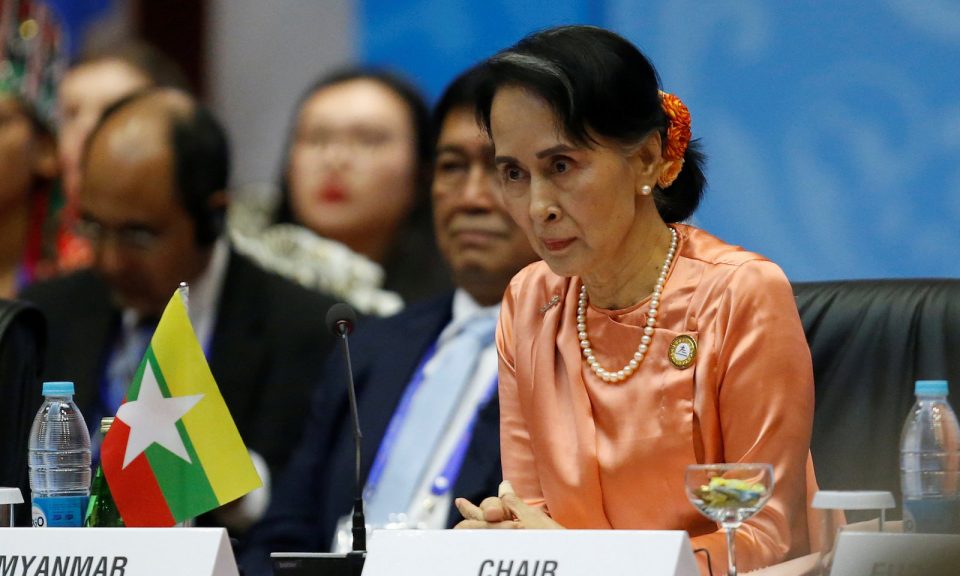 Echoing similar statements from Islamophobic populist leaders in Europe, the United States and Australia, Suu Kyi said, “conflicts around the world are giving rise to new threats and emergencies; illegal migration, spread of terrorism and violent extremism, social disharmony and even the threat of nuclear war.”

Without mentioning the exodus of over 600,000 Rohingya Muslims from Myanmar’s Rakhine state since the August 25 attacks by the Arakan Rohingya Salvation Front (ARSA) sparked a harsh security force response, Suu Kyi conflated illegal migration with terrorism, a core justification of the military’s abusive treatment of the minority.

In more subtle fashion than her shrill state media machinery, which insists on referring to ARSA as “extremist Bengali terrorists”, Suu Kyi insinuated unchecked illegal migration from Bangladesh represents an existential threat by swamping the Buddhist majority nation with Muslims.

The state counsellor’s speech echoes recent arguments made by the Myanmar military, or Tatmadaw, and the radical Buddhist clergy, the nationalist bookends of a culture of denial over the horrific treatment of the Rohingya. 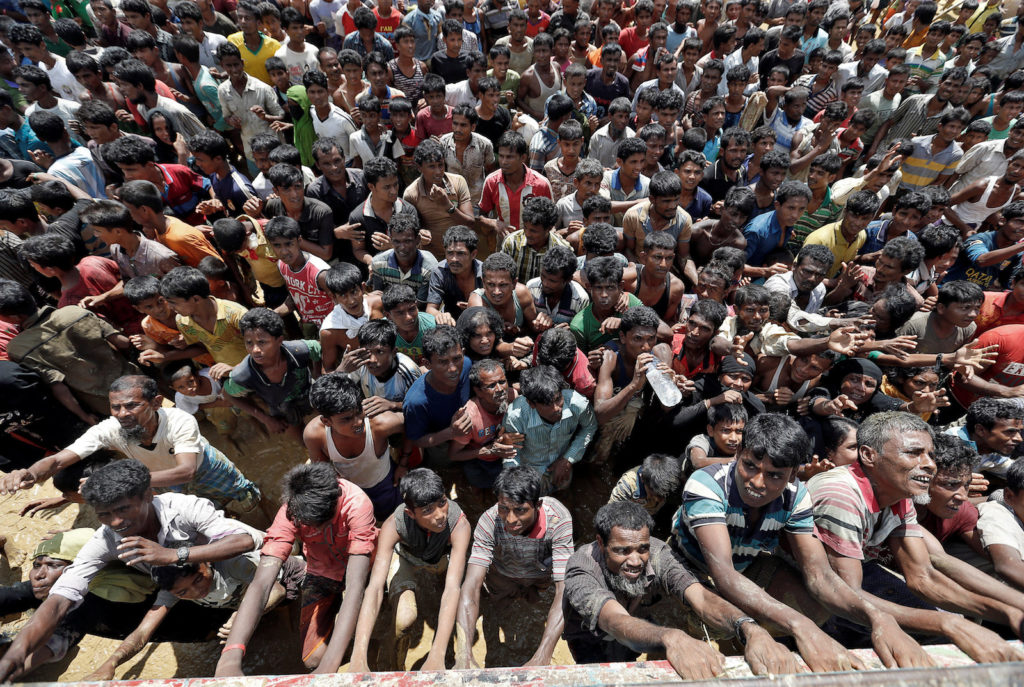 In recent weeks, one of Myanmar’s most revered and popular Buddhist abbots, Sitagu Sayadaw, delivered a sermon to army officers and their families at the Bayinnaung training camp in Kayin State in which he told the story of a Buddhist Sinhalese king who slaughtered many ethnic Tamils in an epic battle.

The king’s Buddhist advisors, the sermon said, justified the slaughter by affirming that only those who followed Buddhist precepts could be considered humans.

It was a chilling example of what scholar Matthew Walton, writing in Foreign Affairs, claimed to be religious justification for mass killing of non-Buddhists, as Sitagu “is so influential and revered that his words could provide the final cover for Myanmar’s Buddhists to ignore international criticism and cloak themselves in the righteousness of holy war.”

The denial came even though the military is under investigation by the United Nations for crimes against humanity, the United States is considering sanctions, and Amnesty International has in a report released today accused the government of ‘apartheid’ in their treatment of the Rohingya. 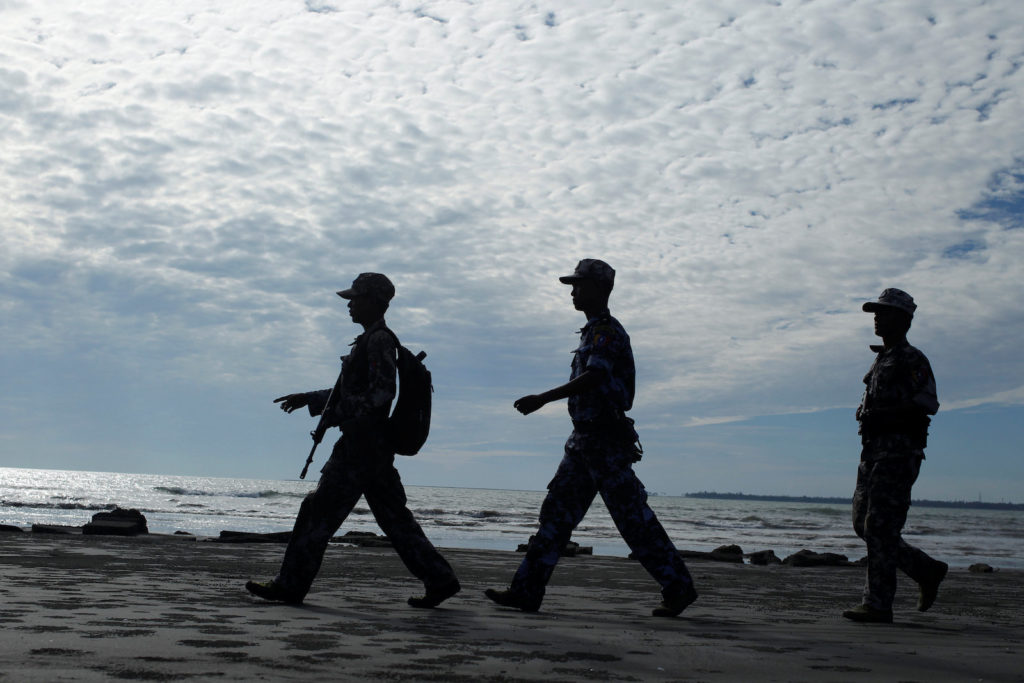 Commander in Chief Senior General Min Aung Hlaing posted comments on his Facebook page last week in which he insisted that any of the people who have fled into Bangladesh who wish to return must be full citizens, a small minority of the hundreds of thousands who have fled.

This will make Suu Kyi’s plans for mass repatriation in a deal reportedly brokered by Chinese foreign minister Wang Yi between Dhaka and Naypyidaw problematic.

In sum, the government, military and clergy’s statements speak to an increasingly xenophobic defiance of international criticism and blame shifting onto the Rohingya themselves. This has infused the national debate with racism and a refusal to countenance the scale of the humanitarian crisis.

The long-standing scenario of a neo-Malthusian nightmare of unchecked migration from Muslim Bangladesh to Myanmar has infused Islamophobic rhetoric for years, equating Rakhine state as the West Bank of Myanmar, or as some ultra-nationalist Buddhist monks call it, the ‘Western Gate.’

In a recently released book published by Myawaddy (the Tatmadaw’s media company), the transcript of a seminar on “Talk on Rakhine Issue: Discussions on Finding Solutions” which included a discussion between the historian Jacques Leider and former presidential advisor Ko Ko Hlaing, the moderator opened with the parable of “The Arab and the Camel.”

A man is inside a tent, the camel asks to just stick his head in, and very soon the whole body of the camel has pushed out the man, “so the proposal of the Muslim enclave in the northern part of Rakhine would seem like the same story.” This was related at a two-day seminar in September in which Western defense attaches were invited to hear the government’s position on the crisis. 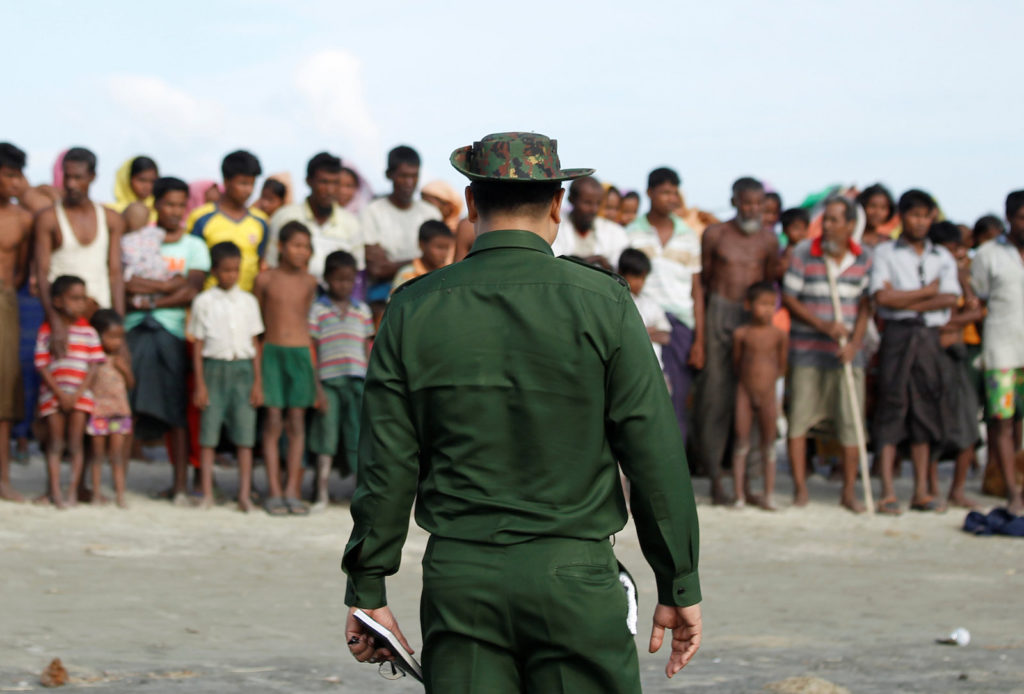 The celebrated local cartoonist Harn Lay, who for years penned sharply satirical caricatures of military leaders, recently published a cartoon which depicts what appears to be Bangladesh prime minister Sheik Hasina squeezing out a multitude of babies who crawl from under a tattered Myanmar flag.

The cartoon portrayal then shows them returning back as older men, dark skinned and wretched looking, begging in front of corpulent well-dressed white men who are taking photos of them.

This crude depiction of Bangladeshi mass breeding, illegal immigration, and international complicity resonates throughout Myanmar, where the Rohingya evince little sympathy for their perceived dishonesty in claiming a long connection to Rakhine state and citizenship rights within Myanmar.

Suu Kyi has so far avoided outright racist rhetoric. In 2016, she called on diplomats and aid workers to refrain from using the term Rohingya, but also instructed officials to stop referring to them as Bengali. She was then seeking to tone down the inflammatory rhetoric around the Rakhine issue.

That sensible, if not value-shy, approach has now been relegated to secondary importance over national security, with the statements from her office replete with racist rhetoric, conflating immigration with terrorism, and blaming the victims of the Tatmadaw’s abusive operations.

Suu Kyi’s speech retreated from moral leadership to one based on fear and paranoia. It will make the resolution of the Rakhine conflict and Rohingya refugee crisis even more insurmountable than it now appears.