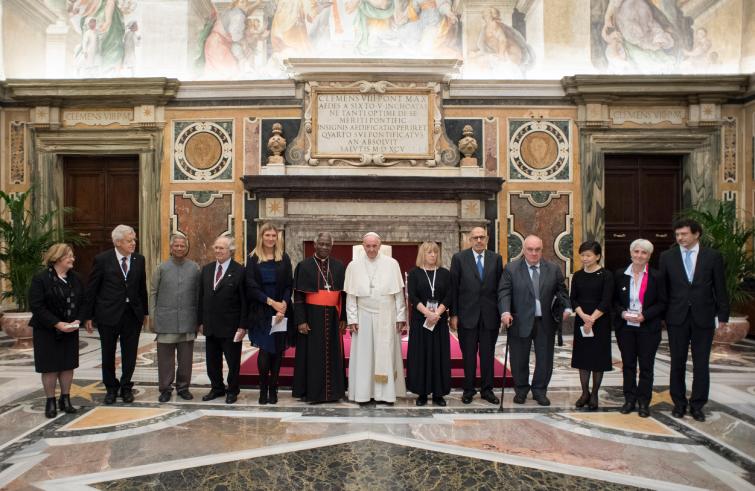 13 Nov 2017 – In a landmark statement on nuclear arms on Nov. 10, Pope Francis has categorically condemned not only “the threat of their use” but also “their very possession.”

Nuclear weapons, he told participants at a Vatican symposium on “integral disarmament,” exist “in the service of a mentality of fear that affects not only the parties in conflict but the entire human race.”

His audience included representatives from the United States and Russia. He told them that “international relations cannot be held captive to military force, mutual intimidation and the parading of stockpiles of arms.”

He said that “weapons of mass destruction, particularly nuclear weapons, create nothing but a false sense of security. They cannot constitute the basis for peaceful coexistence between members of the human family, which must rather be inspired by an ethics of solidarity.”

He is the first pope ever to condemn the possession of nuclear weapons since they were initially developed at the end of World War II and then used twice by the United States at Hiroshima and Nagasaki in 1945, causing the deaths of 210,000 people.

“International relations cannot be held captive to military force, mutual intimidation and the parading of stockpiles of arms.”

Bishop Robert McElroy of San Diego told America, “Pope Francis was clear that because of the significant risks of even an anticipated or accidental war, and of the gargantuan and devastating effects of nuclear war, and of provoking other nations to perhaps use them, the possession itself of these weapons is now condemned, regardless of the intention.”

He called the pope’s statement “new and, of course…very significant.” “It is going beyond the questions raised before about the ethic of nuclear deterrence not being warranted in the present day,” Bishop McElroy said. “It’s really going beyond that to the possession itself being morally wrong.”

The bishop said that “the moral imperative” for Catholics and indeed the whole world is a move “progressively and dramatically toward getting rid of nuclear arms.”

Ambassador Douglas Roche, who served as Canada’s ambassador on disarmament to the United Nations (1984-89) and was elected chairman of the United Nations Disarmament Committee in 1988, told America: “I consider Pope Francis’ categorical condemnation of the possession of nuclear weapons to be of a historic nature, a breakthrough. It’s the strongest statement that a pope has made in opposition to the very holding of nuclear weapons, as distinct from their very use.”

Ambassador Roche noted that the United States is currently leading a fight against a recent U.N. treaty supporting the global abolition of nuclear weapons, a position which just took a “big hit” because of the pope’s condemnation.

“Now along comes Pope Francis who gives his moral authority to [nuclear abolition], too,” he said. “This removes the last band the United States had in justifying nuclear weapons, which was John Paul II’s statement in 1982 in which the church gave a limited acceptance for deterrence as long as it would not become permanent.”

He believes the pope’s statement “was a courageous step because he knows that he’s got a lot of bishops that are going to be extremely uneasy about this,” and “the governments [who possess nuclear arms] will not like it at all and especially the United States, where there is a very significant Catholic population.”

“The Holy See has said this before, but putting the words in the mouth of the pope gives it a whole new standing,” said Drew Christiansen, S.J., of Georgetown University, who delivered a talk at the symposium. “This is a very dramatic break from the popular mind; the church has dropped the other shoe and said it is wrong to possess nuclear weapons.”

The Holy See, for its part, is fully aware that there is no movement among those who possess nuclear arms toward negotiating their elimination. On the contrary, they are making significant new investments in their modernization.

Pope Francis’ condemnation of nuclear weapons represents a significant departure from the stance taken by his predecessors. St. John Paul II had accepted the ethic of deterrence with the understanding that the nations who possessed nuclear arms intended to move forward from deterrence to disarmament as outlined in the Non-Proliferation Treaty (Article VI) signed in 1968.

Pope Francis’ condemnation of nuclear weapons represents a significant departure from the stance taken by his predecessors.

Bishop McElroy told the conference on Nov. 11 that Pope Benedict had recognized the great risk nuclear weapons posed to humanity and called for an effective demilitarization. But that has not happened.

Bishop McElroy said, “In 2008, Pope Benedict, surveying the nuclear landscape in the world, lamented that an ethic of complacency and even a toleration of limited nuclear expansion had become inextricably intertwined with the ethic of deterrence.” Pope Benedict, he said, observing that possession of nuclear weapons “was increasingly becoming a sign of great power status,” saw them as “a temptation for newly emerging powers to defend their interests and their peoples, and a spur to modernization.”

Pope Francis’ condemnation of the possession of nuclear weapons came in his keynote address to the 350 participants at this Vatican symposium on “perspectives for a world free from nuclear arms and for integral disarmament,” organized by the Dicastery for the Promoting Integral Human Development.

The pope began his address by underlining the importance of their discussion at this moment in history when “a climate of instability and conflict” is growing and the prospects of a world without nuclear arms seems “increasingly remote.” He said that “the arms race continues unabated and the price of modernizing and developing weaponry, not only nuclear weapons, represents a considerable expense for nations.”

As a result, Francis said, “the real priorities facing our human family, such as the fight against poverty, the promotion of peace, the undertaking of educational, ecological and health care projects, and the development of human rights are relegated to second place.”

His condemnation came from a realization of “the catastrophic humanitarian and environmental effects of any employment of nuclear devices” and “the risk of an accidental detonation as a result of error of any kind.”

Faced with this situation, Francis said, “the threat of their use, as well as their very possession, is to be firmly condemned.”

The two-day symposium (Nov. 10 to 11), whose sponsors included the German and Japanese bishops’ conferences, the Nuclear Threat Initiative and Georgetown University and the University of Notre Dame, brought together 11 Nobel Peace laureates and experts in the field of nuclear arms from civil society, states and international organizations as well as influential academics.

Beatrice Fihn, the Swedish-born executive director of the International Campaign to Abolish Nuclear Weapons, which was awarded this year’s Nobel Peace Prize, told America that the pope “is giving moral leadership” on nuclear disarmament.

She hailed the fact that under his leadership the Holy See “ratified the treaty on the prohibition of nuclear weapons so quickly.” This was a reference to the first legally binding international agreement to comprehensively prohibit nuclear arms, which was approved at a U.N. conference on July 7. Archbishop Paul Gallagher, the secretary for Relations with States, signed the treaty on behalf of the Holy See and the Vatican City State on Sept. 20 in what Ms. Fihn described as “a strong signal to the world.”

Ms. Fihn told America: “I am not a religious person, and I am usually not very impressed with celebrities, but I was very taken with Pope Francis, and when he came into the room I was very moved by his presence. He was very warm when I greeted him, and I asked him to ask people to pray for the abolition of nuclear weapons on Dec. 10, international human rights day, when we receive the Nobel Peace Prize.”

Ms. Fihn was “delighted” to have been invited to this conference, which, she said, “is a sign that Pope Francis and the Vatican are taking this seriously, and that it’s one of their priority issues now.” She emphasized that the movement to abolish nuclear weapons “is going to need the support of religious communities if we are going to be able to take this forward.” She believes there is “an opportunity” to do so now because of “the tensions between the United States and North Korea and the growing fear of a confrontation.”

Today nine states possess nuclear arms: the United States, Russia, the United Kingdom, France, China, Israel, India, Pakistan and North Korea. The United States and Russia together have 14,000 out of the 15,000 nuclear weapons known to exist in the world, 2,000 of which “are still on high alert,” according to Mohamed El Baradei, former head of the International Atomic Energy Agency and one of the main speakers at the symposium.

Mr. El Baradei described the argument that nuclear weapons have kept the peace as “bogus.”

“A peace that hangs on a doctrine of mutually assured destruction,” he said, “is underpinned by human fallibility and, in addition, is irrelevant to extremists. It is a peace that is unsustainable and highly perilous.”

Nuclear weapons, he warned, “are the most urgent threat facing humanity today, and the risk of their use is higher than at any time in the recent past.”

According to Mr. El Baradei, “The entire landscape is frightening and shameful. It shows no genuine commitment whatsoever to nuclear disarmament.”

He said, “A U.S. or Russian president has a mere seven to eight minutes to respond to a ‘reported’ nuclear attack, with the odds of miscalculation increasing exponentially as a result of cyber-manipulation.”

Alexei Georgevich Arbatov, who has spent most of his life working on these issues and now heads the Center for International Security at the Institute of World Economy and International Relations in Russia, agreed with Mr. El Baradei. “The nuclear arms control regime of the last 50 years is disintegrating,” he said.

Several other speakers, including Jody Williams, who was awarded the Nobel Peace Prize in 1997 for leading the successful campaign to get an international treaty banning anti-personnel landmines, emphasized the need for all-out global mobilization to get more and more states to sign and ratify the treaty on the prohibition of nuclear weapons. Everyone recognizes that it is a steep, uphill struggle, but there is confidence that it can be done.

A number of participants called for Pope Francis to write an encyclical on this subject, as a companion to “Laudato Si’.” But others, like Northern Ireland Nobel Peace laureate Mairead Corrigan-Maguire, told America they would like the issue to be part of an encyclical on “non-violence.” Cardinal Peter Turkson, the head of the Vatican’s integral human development office, said he has heard these calls but believes his dicastery must first work on a revision of the Compendium of the Social Doctrine of the Church on the question of nuclear arms.

As this important and energizing symposium drew to a close, Wada Masako, a “Hibakusha”—the Japanese name for the survivors of the atomic bombing of Hiroshima and Nagasaki—gave a deeply moving testimony. She recalled that she was 22 months old when Nagasaki, the city where she lived, was devastated. She went on to narrate in graphic detail what her mother had told her about “the hellish scenes” she witnessed then. When she concluded her testimony with a passionate appeal for the abolition of nuclear weapons, she was given a standing ovation.

World leaders are meeting at the Vatican to discuss nuclear weapons. Here’s why. – Kevin Clarke

No More Nukes?: A new movement argues it is time to finally ban the bomb. – Kevin Clarke