RIP Edward Herman, Who Co-Wrote a Book That’s Now More Important Than Ever

We Need a New Manufacturing Consent 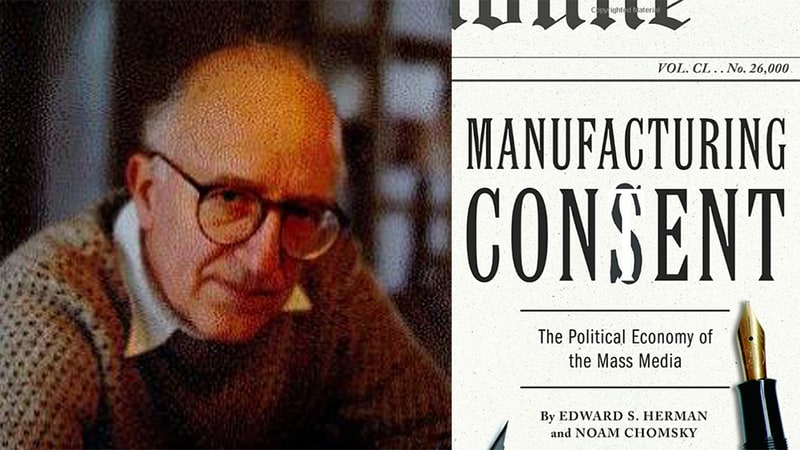 14 Nov 2017 – Edward Herman, the co-author (with Noam Chomsky) of Manufacturing Consent, has died. He was 92. His work has never been more relevant.

Manufacturing Consent was a kind of bible of media criticism for a generation of dissident thinkers. The book described with great clarity how the system of private commercial media in America cooperates with state power to generate propaganda.

Herman’s work was difficult for many to understand because the nature of the American media, then and now, seemed at best to be at an arm’s length from, say, the CIA or the State Department. Here is how the book put it:

“It is much more difficult to see a propaganda system at work where the media are private and formal censorship is absent.”

The basic thesis of Manufacturing Consent was that propaganda in America is generated through a few key idiosyncrasies of our (mostly private) system.

One is that getting the whole population to buy in to a narrative requires the sustained attention of the greater part of the commercial media, for at least a news cycle or two.

We don’t censor the truth in America, mostly. What we do instead is ignore it. If a lone reporter wants to keep banging a drum about something taboo, like contracting corruption in the military, or atrocities abroad, he or she will a) tend not advance in the business, and b) not be picked up by other media.

Therefore the only stories that tended to reach mass audiences were ones in which the basic gist was agreed upon by the editors and news directors of all or most of the major media companies.

In virtually all cases this little mini-oligarchy of media overlords kept the news closely in sync with the official pronouncements of the U.S. government.

The appearance of dissent was permitted in op-ed pages, where Democrats and Republicans “debated” things. But what readers encountered in these places was a highly ritualized, artificially narrow form of argument kept strictly within a range of acceptable opinions.

Herman and Chomsky stressed the concept of worthy and unworthy victims. In Manufacturing Consent, written during the Cold War, the idea was expressed thusly: One Polish priest murdered behind the Iron Curtain earned about a hundred times as much coverage as priests shot in Latin America by American-backed dictatorships.

The Polish priest was the worthy victim, the Latin American priests unworthy.

So Americans learned to be furious about atrocities committed in Soviet client states, but blind to almost exactly similar crimes committed within our own spheres of influence.

The really sad part about the Herman/Chomsky thesis was that it didn’t rely upon coercion or violence. Newspapers and TV channels portrayed the world in this America-centric way not because they were forced to. Mostly, they were just intellectually lazy and disinterested in the stated mission of their business, i.e., telling the truth.

In fact, media outlets were simply vehicles for conveying ads, and a consistent and un-troubling view of the political universe was a prerequisite for selling cars, candy bars, detergent, etc. Upset people don’t buy stuff. This is why Sunday afternoon broadcasts featured golf tournaments and not police beatings or reports from cancer wards near Superfund sites.

The news business was about making money, and making money back then for big media was easy. So why make a fuss?

As a result, the top executives in news agencies were people who were inclined to take official sources as gospel. An additional feature of the business was that the least skeptical reporters were the ones who were promoted the most quickly. And when they got there, reporters manning the top posts were encouraged to develop an almost religious worship of credentialing.

A person with a title, be it someone from a think tank, a university, or especially a security service organ, was to be trusted unquestioningly. Meanwhile, outside/dissenting voices were given the hardcore “skeptical journalist” treatment.

This is how situations like the Iraq War invasion happened, in defiance of all common sense.

Even though a child could see that the government’s stated reason for going into Iraq was both insane and a fiction, virtually everyone in the business jumped into the story with both feet.

Round the clock, TV sets were full of current and former generals and/or talking heads from think tanks boosting the war rationale. Antiwar voices were almost totally excluded.

Within the business, those with doubts hesitated to say so in public. Even at the editorial level, this was so, thanks to fear of backlash.

Herman/Chomsky identified that phenomenon in Manufacturing Consent as “flak” – a policing mechanism whereby reporters and/or media outlets that stepped out of line could expect to be denounced by an entire range of establishment voices.

Those voices were usually the same credentialed “experts” who were accustomed to being worshipped in the normal course of coverage.

In the case of Iraq, fear of being called unpatriotic, a terrorist-lover or “against the troops” cowed most news directors or editors with even remote doubts. And when that didn’t work, networks like MSNBC simply yanked disobedient antiwar voices like Phil Donahue and Jesse Ventura.

Through these parallel operations – the pushing of approved narratives on the one hand and the policing and hiding of forbidden ones on the other – this seemingly unconnected federation of competing media companies and establishment spokesfiends “manufactured” public opinion.

There was no dictum from above, the way it might have happened in a tinpot dictatorship or a superpower oligarchy like the Soviet Union.

Public “consent” for policies like the Iraq invasion was manufactured through a complex series of organic processes, then kept in place via a mix of powerful economic and psychological incentives.

Herman was interested in the phenomenon of how even outright fictions could be sold in a “free” media system.

In his last piece, from this past summer, Herman made a list of some of the whoppers the media has foisted on the public over the years: the depiction of the U.S. not as an invader but as a defender of South Vietnam against “aggression,” the notion that the Soviets were behind a papal assassination attempt, the “missile gap” and others.

Herman was a skeptic about the current Russia news, but that isn’t why his work is relevant today. You can believe he’s dead wrong on Russia and Trump, and Manufacturing Consent would still be far more relevant now than it was when he and Chomsky first wrote it.

The main reasons for this have to do with the structure of the current commercial media. Because of tech companies like Google and Facebook, it is significantly easier to “manufacture” consent today than it was before.

A small handful of monopolistic tech companies like Facebook have life-or-death power over media companies. They can steer traffic wherever they please simply by tweaking their algorithms. Firms that don’t themselves create news content wield this monstrous influence.

Controlling how, where and when you got the news was how media companies were paid previously. Since those processes are mostly out of their hands now, news companies no longer control their own economic fates.

Moreover the policing mechanisms are far more powerful now. Herman and Chomsky wrote about flak in the era before social media. Today blowback against dissenting thought is instantaneous and massive.

Individual reporters are far more likely to be freaked out about it because Internet trolls are so personal and can rattle just about anyone. Add the proliferation of fake blowback produced by oppo firms and troll farms and it’s not an accident that the overwhelming majority of “legacy media” content stays within the confines of conventional blue or red rhetoric.

The major difference between then and now has to do with which narratives are being pushed. When Manufacturing Consent was written the major problem was that Americans across the entire political spectrum were being sold a range of myths about the beneficence of American power and government policy.

Today it is not clear who is actually dictating to whom. Is the state dictating to the media, or are global distribution firms dictating the narrative to states?

We can make a few deductions about the new “manufactured consent.” The thrust of modern media isn’t as simple as cheerleading for the flag and ignoring atrocities, although we clearly still do that.

There seems also to be a massive emphasis on political division as a route to profit. Since getting people to discuss and argue is how companies like Facebook get paid, driving us toward ever more divisive media is an obvious imperative. But to what end?

Herman and Chomsky’s work was a great gift to a generation of thinkers trying to make sense of how power in the West sold itself to populations. The late Herman should be honored for that critical contribution he made to understanding American empire.

It’s a shame he never wrote a sequel. Now more than ever, we could use another Manufacturing Consent.

One Response to “RIP Edward Herman, Who Co-Wrote a Book That’s Now More Important Than Ever”