The report, which highlights the growing gulf between haves and have-nots, was compiled by five economists, including scholars Emmanuel Saez and Thomas Piketty. 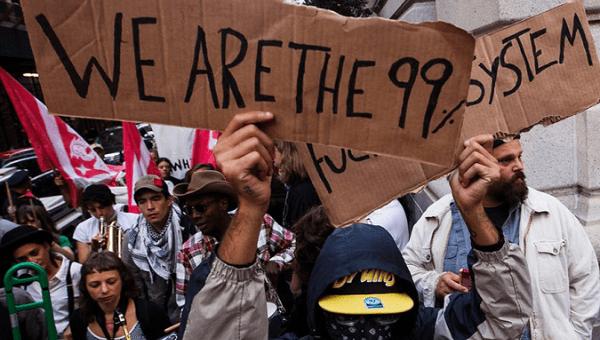 Average annual income for the bottom 50 percent of earners has stayed constant at US$16,000 over the last four decades. | Photo: Reuters

14 Dec 2017 – Global Economic Inequality is surging, further widening the pay gap between the haves and have-nots, according to a new World Inequality report.

The report highlights the growing gulf between the haves and the have-nots, and was compiled by five economists, including scholars Emmanuel Saez and Thomas Piketty.

The top .001 percent of earners in the United States, consisting of almost 1,300 households, have seen their earnings skyrocket by 636 percent in the past 12 months.

Meanwhile, the average annual income for the bottom 50 percent of earners has stayed constant at US$16,000 over the last four decades, adjusting for inflation.

In 2016, the richest one percent of U.S. residents held 39 percent of the country’s wealth: 15 percent more than they controlled in 1980.

RELATED: 50% of World’s Wealth Is Controlled by Wealthy 1%: Report

“In the Middle East, the world’s most unequal region according to our estimates, the top 10% capture 61% of national income.”

The news comes a day after the WHO and the World Bank reported that nearly 100 million people are forced to choose between healthcare or food and basic living amenities due to extreme poverty.

“Some 800 million people spend more than 10 percent of their household budget on health care, and almost 100 million people are pushed into extreme poverty each year because of out-of-pocket health expenses,” the WHO-World Bank study noted.

“Recent research shows that there can be an enormous gap between the public discourse about equal opportunity and the reality of unequal access to education,” the Economic Inequality report concludes.

“Democratic access to education can achieve much, but without mechanisms to ensure that people at the bottom of the distribution have access to well-paying jobs, education will not prove sufficient to tackle inequality. Better representation of workers in corporate governance bodies, and healthy minimum-wage rates are important tools to achieve this.”

A November report published by Credit Suisse revealed that an alarming 50 percent of the world’s wealth is controlled by just one percent of the global population. The income gap in the United States has widened since the 2008 financial crisis, when the world’s richest people held 42.5 percent of global wealth, compared to 50.1 percent in 2017.

“The share of the top one percent has been on an upward path ever since, passing the 2000 level in 2013 and achieving new peaks every year thereafter,” the annual report noted. “Global wealth inequality has certainly been high and rising in the post-crisis period.”

The report also revealed that nearly 3.4 billion lower-income people live in developing nations – 90 percent of those in India and Africa – on less than US$10,000 annual income.

“In some low-income countries in Africa, the percentage of the population in this wealth group is close to 100 percent,” the report stated. “For many residents of low-income countries, life membership of the base tier is the norm rather than the exception.”

The world inequality study’s authors concluded: “If in the coming decades all countries follow the moderate inequality trajectory of Europe over the past decades, global income inequality can be reduced — in which case there can also be substantial progress in eradicating global poverty.” 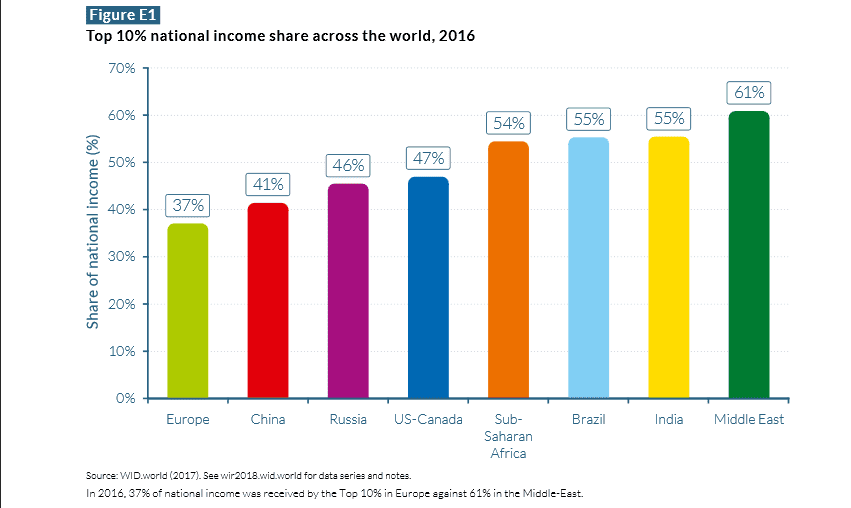 The study reveals the share of total national income accounted for by each nation’s top 10% of earners.