With U.S. weapons companies claiming more than half of global sales, and despite five previous years of decline, arms producers around the world raked in $375 billion in profits. 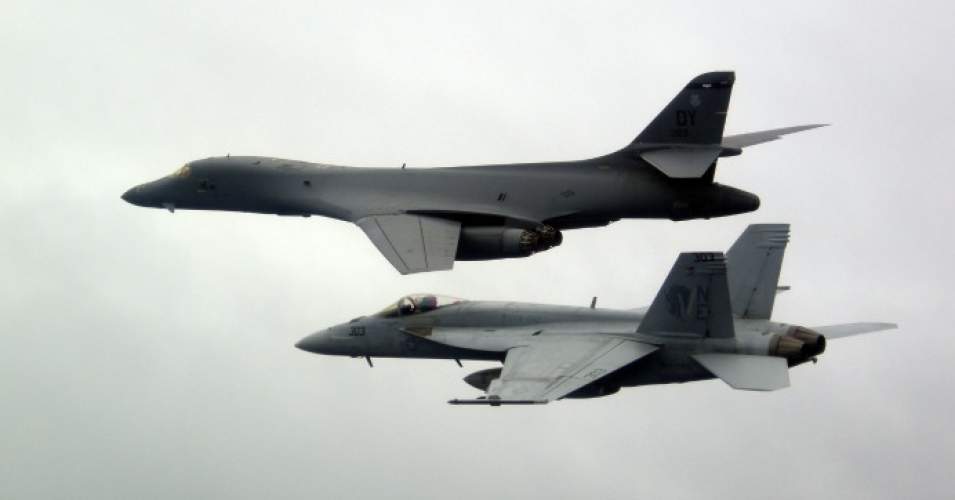 11 Dec 2017 – With U.S. weapons makers leading the way, and after five consecutive years of decline, sales among the world’s 100 largest arms producers rose in 2016, garnering nearly $375 billion in profits, according to a new analysis of industry data by the Stockholm International Peace Research Institute (SIPRI).

“The growth in arms sales was expected and was driven by the implementation of new national major weapon programs, ongoing military operations in several countries, and persistent regional tensions that are leading to an increased demand for weapons,” according to a SIPRI fact sheet (pdf).

Considering more than half of SIPRI’s top 20 weapons sellers are based in the United States—including Lockheed Martin, Boeing, Raytheon, and Northrop Grumman in the top five—the report declares the U.S. has a “decisive influence on the global trend.” Sales by U.S. companies grew by four percent last year, totaling more than $217 billion. Among the top 100 companies, U.S. producers claimed the largest share of sales by a notable margin—nearly 58 percent. 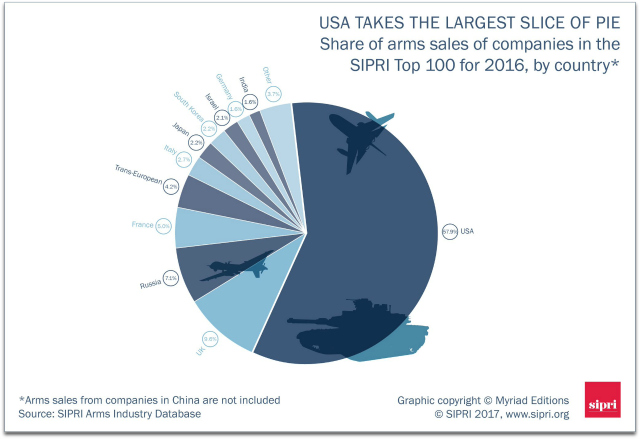 The surge in sales by U.S. companies was in large part thanks to Lockheed Martin, the world’s top weapons producer. Lockheed Martin’s sales grew by 10.7 percent last year, which report co-author Aude Fleurant, who directs of SIPRI’s Arms and Military Expenditures Program, attributed to “the acquisition of helicopter producer Sikorsky in late 2015 and higher delivery volumes of the F-35 combat aircraft.”

In Europe, SIPRI found “there were overall decreases in the arms sales of Trans-European, French, and Italian companies, while companies in the U.K. and Germany recorded overall increases,” with eight British companies ranking in the top 20. Although sales also rose among Russian companies, the rate of increase fell for the second year in a row, which researchers said was due to “major economic difficulties experienced by Russia in 2016.”

Among those designated as “emerging producers”—companies based in Brazil, India, South Korea, and Turkey—South Korea saw the most notable rise, with sales increasing by more than 20 percent.

“Continuing and rising threat perceptions drive South Korea’s acquisitions of military equipment, and it is increasingly turning to its own arms industry to supply its demand for weapons,” said SIPRI senior researcher and report co-author Siemon Wezeman, pointing to the mounting nuclear tensions between North Korea and the United States, a long-time ally of South Korea. “At the same time,” Wezeman added, “South Korea is aiming to realize its goal of becoming a major arms exporter.”

Overall, global sales of arms and military services have increased 38 percent since SIPRI began analyzing the data in 2002. Although the researchers do not consider sales by Chinese companies due to lack of data, they note in the report that China’s military spending “has increased almost threefold between 2002 and 2016,” and estimate that nine or 10 Chinese companies likely would be included in the top 100 list—with four to six in the top 20—if the data were publicly available.

Despite the global rise in arms sales, researchers suggest the increase could have been even higher if traditional weapons importers hadn’t run out of funds. Fleurant told Deutsche Welle that “the falling commodity prices for oil and gas have put such a strain on the public finances of many African and South American countries that they bought fewer weapons than planned.”