Senator Cory Booker has introduced a bill that would ban the use of cruel traps on federal lands.

1 Dec 2017 – A beaver in upstate New York swims along an icy riverbank. It is an area familiar to him. It is his home. But today, there is something different about this setting: a body-gripping Conibear trap, placed under water at the entrance to his dam by a trapper earlier in the day. The beaver swims to enter his dam and—SNAP!—his body is suddenly caught in the trap.

His abdomen has been crushed. The pain is excruciating. The beaver struggles to free himself, but it’s useless; the trap is too strong, and he loses strength and air with every passing moment.

The beaver claws at the surface of the water, desperate for a breath. Finally, after 20 minutes of struggle and agony, he drowns. Sometime later, the trapper returns to check his traps and finds his victim lying dead in the water, still ensnared in the vicious trap. 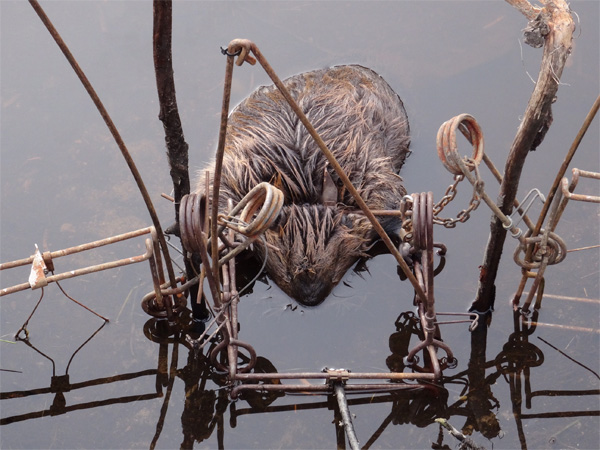 A dead beaver in a trap.

This horrific scene plays out regularly all across the United States. Trappers lay down traps wherever animals live: on land, in water, and even in trees. In fact, some three to five million animals are trapped in this country each year by commercial fur trappers (and that figure does not even include the number of animals killed in the name of “wildlife control”).

These animals endure unimaginable pain and fear… and for what? They’re trapped for their fur, which is used for fur fashions. For vanity. And, sometimes, it’s simply for recreation. For “fun.” So much needless suffering. So many lives taken.

Sadly, this beaver’s story may be one of the more humane ways to die in a trap. Contrary to the claims of “quick kills” made by trapping advocates, most animals are not instantly killed by the trap, but die slowly—by drowning, predation, exposure, shock, injury, or blood loss—sometimes after languishing for days. There are even tales of animals caught in traps left unchecked for multiple days, who feverishly attempt to chew off their own trapped limb to escape the terrible pain. 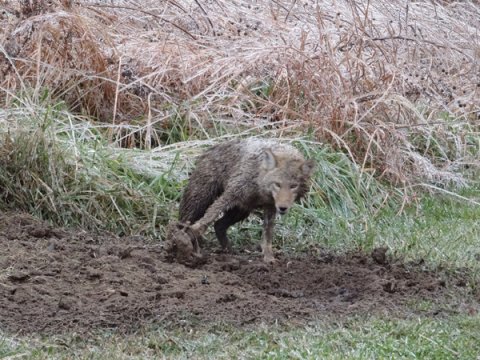 A coyote stuck in a leg trap.

It’s not just the animals targeted by trappers who suffer. Traps frequently capture unintended targets like domestic dogs and cats, endangered animals, and even children. In fact, it is estimated that, for every targeted animal trapped, two non-targeted animals are accidentally caught.

Is wildlife safe from trapping anywhere? Inexplicably, trapping is even permitted on more than half of our national wildlife refuges. That’s more than half of 565 national wildlife refuges, on more than 850 million acres of federally-owned land and water: the most comprehensive and diverse collection of wildlife habitats in the world, home to more than 380 endangered species. These “sanctuaries,” for the record, are your tax dollars at work. Each and every one of us is an unwitting stakeholder in a system that allows brutal trapping. 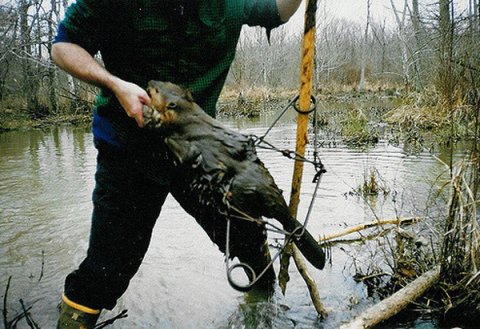 A hunter retrieves a dead beaver caught in a trap. Many animals caught in these traps endure immense suffering for days before dying.
(image: Gary Bridgman/Flickr )

You can help end this cruelty

1) View and share Born Free USA’s 2017 Trapping Report, which includes a Trapping Report Card for each state. (Do you live in a state that scored badly? Work to end trapping at the local level.)

Born Free USA Reveals Best and Worst States in 2017 Animal Trapping Report. How does your state measure up? https://t.co/gvLwsokfoz

Despite being a national epidemic, trapping is largely considered to be an issue for state governance. Trapping seasons, the frequency traps must be checked, and the types of traps permitted for use to capture specific species are all details regulated by individual states.

The 2017 Trapping Report includes a report card that assigns a letter grade to each state based on the existence and effectiveness of the state’s trapping regulations on animal welfare, wildlife conservation, and public safety, ranging from A+ to F. Hawaii is the only state to receive a perfect grade—an A+—because it has banned all commercial and recreational trapping on public lands. Other states, like California, Colorado, and Washington, which have strict trapping regulations, also received high marks.

While there has been some progress over the years, far too many states populate the bottom half of the list, including Alaska and Texas, whose failure to impose even the most basic regulations earned them each an F. Sixty percent of states received a grade worse than C for enforcing regulations in some areas, but not in others. And, when all of the states’ grades are averaged, the United States scores a pitiful overall grade of D+: a failing grade for a country that leads the world in so many other areas.

2) Urge your senators to cosponsor the Refuge from Cruel Trapping Act (S. 1919). Senator Cory Booker (D-NJ) recently reintroduced this bill that would ban the use or possession of snares, Conibear traps, and steel-jaw leghold traps within the National Wildlife Refuge System. The Refuge from Cruel Trapping Act would help eliminate this barbaric and archaic practice on these federal lands, which is a crucial step in limiting trapping across the country.

Join Born Free USA and Sen. @CoryBooker in calling for an end to #trapping on @USFWSRefuges! https://t.co/qquLksa2c2 pic.twitter.com/NRmjNXHNMh

3) Learn more about trapping with the groundbreaking Victims of Vanity investigations.

4) Shop fur-free. Animals are often trapped for their fur. Help end this demand by visiting www.furfreeretailer.com and supporting the hundreds of companies that have committed to a fur-free policy.

To end this needless cruelty, there must be greater consumer awareness of the fur industry, as well as stronger laws and regulations, on both the state and federal levels. Animals don’t deserve to experience such horrific deaths for any reason, least of all for human vanity.

Prashant Khetan is the chief executive officer and general counsel of Born Free USA, and an adjunct professor at George Washington University School of Law.