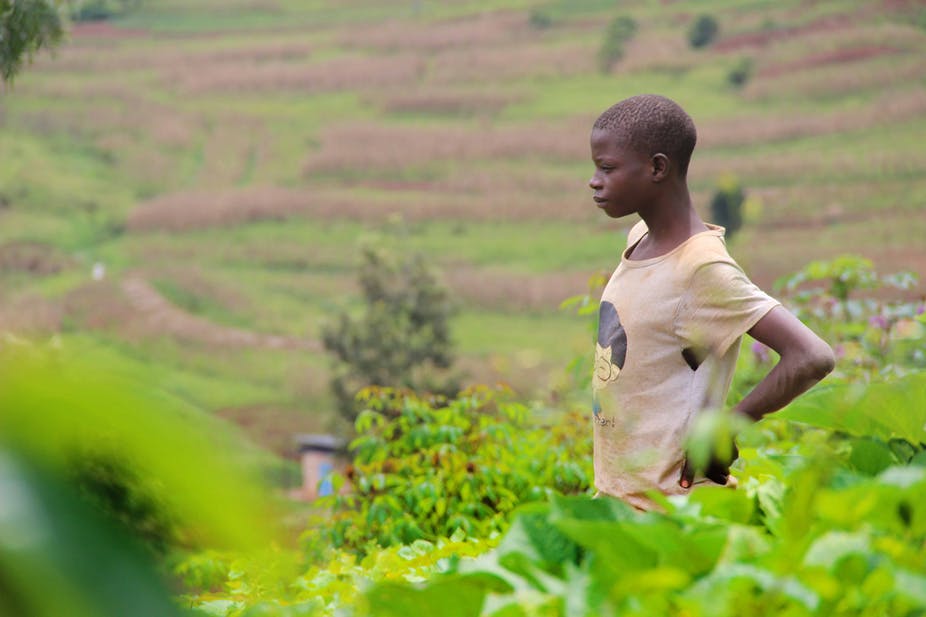 More than 70% of Rwanda’s population are subsistence farmers.
Shutterstock/Sarine Arslanian

13 Dec 2017 – The Rwandan government –- supported by major international donors –- has high ambitions to modernise and professionalise its agrarian and land sector to reduce poverty and create economic growth.

But, the sector faces some big challenges. There is a high incidence of landlessness, especially among the poorest who, when confronted with unforeseen costs, are often forced to sell land. This is a problem because more than 70% of the population are subsistence farmers, meaning they grow the food they eat. Rwanda is also one of the most densely populated countries in the world. On average households typically have just 0.75 hectares.

The government’s reforms fit into a broader call, spearheaded by the UN in the early 2000s, to implement a “Green Revolution” in sub-Saharan Africa. The idea behind this is that land tenure would be formalised. This would increase security and encourage farmers to invest in their land.

Investments would be made in modern inputs – like seeds and subsidised fertilisers – and commercialisation would increase the production of selected crops. As a result, smallholder farmers should profit as they are integrated into commercial commodity chains. At a national scale this would lead to an increase in food security, exports and growth.

This article combines the findings of nine academic researchers who conducted in-depth research on the impact of Rwanda’s policies. The research found that Rwanda’s land and agricultural policies diminished land-tenure security, excluded vulnerable groups from taking part in the agricultural programs and caused food insecurity for many small-scale farmers.

This challenges the Rwandan government’s position, which portrays the agricultural sector reforms as hugely successful, and claims that these have resulted in poverty reduction and increased agricultural productivity.

The government relies heavily on quantitative indicators to make these claims. But we do not feel they tell the full story.

We studied three of Rwanda’s agricultural policies in depth: land registration, the crop intensification programme and the promotion of farmer cooperatives.

Land registration: The government assumed that official land registration and titling would improve land-tenure security. But our studies show that the new law has led to a perceived loss of control, tenure security and choice for smallholders. This is because the 2005 Organic Land Law states that land belongs to the government and may be reallocated if it is not used according to state policies. Evidence from our research has shown that local administrators frequently threaten farmers with expropriation in rural areas. Urbanisation policies also involve expropriation, often without adequate compensation.

Crop intensification: This programme started in 2007 with the aim of transforming Rwanda’s family-run farms into professionalised businesses. This meant that instead of sowing different crops at different times of year for household consumption, production is focused on maximising the output of single crops in each growing season. This means their surplus can be sold. Research shows that the programme has sometimes been counter productive, leaving people less secure in terms of food and income.

The model is too simple. Rwanda is a hilly country with many differences in growing conditions, landscapes and farmers’ socioeconomic backgrounds. For example, farmers have suffered crop failures because they have planted crops prioritised by the government that are not suited to specific regions. Or farmers’ crops were destroyed because they weren’t the approved ones.

Co-operatives: The Rwandan government wants farmers to organise themselves into cooperatives, creating a top-down governance structure that coordinates agricultural production. Membership is sometimes mandatory. Studies found several problems with the model, including high entrance fees which exclude the poorer and more vulnerable farmers.

The state’s use of statistics

Despite these negative outcomes, the Rwandan government has used statistics to validate claims of increased agricultural productivity and poverty reduction.

Although statistics are often presented as an unbiased representation of reality, several authors highlight that this is not the case. For instance, the government uses quantitative indicators – like crop production – to show that productivity has improved. But this does not adequately capture the impact of agricultural and poverty reduction policies. These overlook the actual experiences of the rural population and does not prove any causal relation between the reforms and the outcome.

On top of this, different data sources contradict each other with no way of telling which dataset is more reliable. The Rwandan government and international donors refer to the most optimistic, but least reliable statistics, as the example below concerning agricultural yields suggests.

For the period 2010/11 – 2013/14, the Rwandan government’s calculations suggest that poverty decreased from 44.9% to 39.1%. However, our analysis of the same data suggests poverty increased by 1.2%. This discrepancy can be attributed to a different assumption about the inflation rate, a key parameter for poverty estimates. The inflation rate assumed by the National Institute of Statistics of Rwanda was 16.7%, a more realistic inflation estimate is 30% –- much higher.

The research presented shows that a deeper understanding is needed on the relationship between government policies and rural realities. It is dangerous, and too simplistic, to draw a direct causal link between rural reforms and poverty reduction.

Unfortunately, there is limited space for contestation in Rwanda. But to effectively engage local society in policy planning, processes need to be inclusive of people with diverse circumstances and perspectives. They must acknowledge and respond to negative impacts by adapting regulations or providing additional support to those in need. This includes independent research, monitoring and evaluation for a realistic, qualitative assessment of rural Rwandans needs and challenges.