What Libya’s “Slave Auctions” Tell Us about the Humanitarian System

It’s Time to Talk about Race and Racism 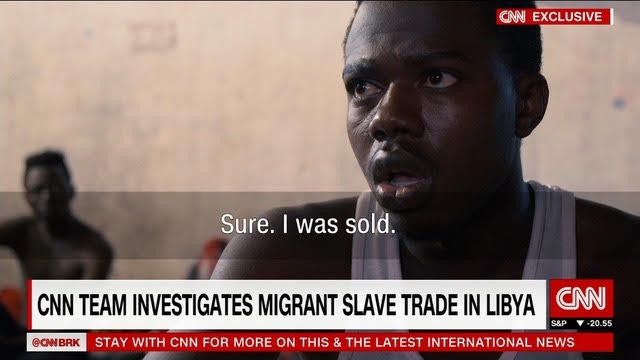 6 Dec 2017 – In the wake of the CNN report on human auctions in Libya, there has rightly been a surge in concern for the thousands of Africans languishing in inhumane conditions in detention camps.

Notable also has been the spontaneous attention of African and African-American celebrities in the face of the silence by official Hollywood goodwill ambassadors for various international organisations.

After years of flailing diplomacy and lonely advocacy, it seems the world is finally ready to talk about the humanitarian disaster in Libya.

But while this new wave of attention is welcome and necessary, it does raise key questions.

Why did it take so long to have this near-unified voice of condemnation on a well-researched and well-covered issue that has been in the public domain for the better part of the last decade? Why now and not before? And more importantly, what does this delayed reaction say about race and racism in international humanitarian work?

The CNN film has had such a major impact in part because of the starkness of the imagery – the visuals reminiscent of the trans-Saharan and trans-Atlantic slave trades.

Although the men in the videos are not shackled, they are certainly imprisoned and, in a later part of the film, they detail the dire conditions in which they are held. Rape, beatings, starvation and murder all recur with alarming frequency in this contemporary slave trade.

The impact of injustice

Yet this information is not new. International organisations, politicians, and journalists have all reported the dire conditions facing African migrants in Libya from at least 2010.

Rather, this new urgency can be attributed in part to the rise of new forms of organising for racial justice.

Specifically, the Black Lives Matter movement has broadened the concerns of global racial solidarity, not just in the United States where it was born, but also across other racially divided societies like South Africa and Brazil.

African diasporas in France and in the United Kingdom have also organised chapters to fight local racial battles. The call for a new global compact for racial justice demanded in the streets of Baltimore, New York, Paris, Johannesburg, and Tel Aviv is finally being heard in offices in Geneva and New York.

Is global humanitarianism ready to talk about race?

It should be, considering that anti-black racism is the elephant in the room when it comes to the protection of refugees and migrants.

The vast majority of the world’s refugees and migrants today are Asian and African, unlike in the 1940s when the original instruments of protection were negotiated.

Most of these people remain in their region of origin. South-South migration is common in Africa where, for example, 20,000 Ethiopians and Eritreans try to reach southern Africa every year.

It’s important to situate contemporary human mobility in its proper place. With the notable exception of the cruel and inhumane global slave trade, the search for better opportunities, particularly in young men negotiating patriarchal masculinities, is – and has long been – common.

But the rules have changed.

In the 19th century as more and more young men took to the sea from southern Portugal as part of exploration and colonisation missions, the women they left behind would sing mournful songs, lamenting their departure and willing them to return safely, songs collectively known as Fado.

Now, hundreds of thousands of young African men and women die on their journeys abroad – from the North African deserts to the Mediterranean Sea, primarily as a consequence of increasingly inhumane policies towards human mobility. They are unmourned except when families finally get word that they have gone missing.

Unlike European men in the last century who were celebrated for leaving home in search of opportunity or even adventure, young African men today are criminalised and punished, especially when they try to enter predominantly white societies.

Take another example. Hundreds of thousands of Rohingya have crossed into Bangladesh and have been largely welcomed, if under-resourced, while Australia expends much force and energy to keep hundreds of refugees violently contained on Manus Island. The same can be said of South Americans attempting to cross into the United States, and of course the frame of existential crisis that populist parties in Europe reserve for Muslim refugees from the Middle East.

If there is a global crisis of migration it is that societies are resorting to increasingly draconian measures to keep “The Other” out.

Contrast this panic with the treatment of predominantly white migrants or “expats”. Most countries in the world have migration policies that favour immigration by “expats” while penalising similar migration from predominantly black and brown populations.

This includes African countries like Kenya, which has kept half a million Somali refugees encamped with no legal status or pathway to citizenship for over 25 years.

But when African and European leaders met in Abidjan last week, Macron was equivocal in offering the same emphatic welcome to African migrants held in the detention centres in Libya – regardless of their qualifications.

At the same time, consider that the barter of African bodies in Libya is not a question of a handful of criminals in the desert. It is a global system that rises to the highest level.

European governments have repeatedly paid African countries to take and keep African migrants and refugees in Africa. Black and brown bodies are constantly on sale in the modern era, but it is couched in the polite language of diplomatic negotiation and “helping them where they are”.

And the very act of feigning shock at information that has been in the public domain – reported by survivors and journalists alike – for so long speaks to an unwillingness to see the suffering of Africans.

Race and racism are at the heart of the ongoing refugee and migrant crisis, but, to date, humanitarianism has been reluctant to talk about it in stark terms.

The preferred language of protection is dry and technical, linked to statutes and conventions that were drafted at the time of Jim Crow and independence movements around the world.

Consider that the refugee convention entered into force in 1951 when most of Africa and the Caribbean was still colonised and three years before Brown v. Board of Education desegregated US schools.

The convention was not designed with ethnic minorities in mind and has struggled to adapt as the dynamics of refugee protection have shifted. It responded to the white-on-white crimes of World War II and is predicated on the goodwill of states towards citizens that arguably has never been extended to black or brown people.

Which is probably why, less than a week later, the momentum triggered by the CNN film is already fading. The United States has pulled out of the new global compact on migration, and the document agreed upon by EU and AU leaders in Abidjan is widely viewed as weak.

The stark visuals of the CNN report have forced a conversation on humanitarian protection to be openly and explicitly framed as a question of racial justice.

This has allowed new voices and new advocacy into the conversation. It remains unclear if this new momentum and direction of thought will translate into more meaningful action for those on the move.