Review of the book, The Plutocene: Blueprints for a Post-Anthropocene Greenhouse Earth, by Andrew Glikson and Andrew Yoram

“The era of procrastination, of half-measures, of soothing and baffling expedients, of delays, is coming to its close. In its place we are entering a period of consequences.”
— Winston Churchill[i]

On the 27 January, 2017, the Bulletin of the Atomic Scientists moved the arms of its doomsday clock to 2.5 min to midnight, the closest it has been since 1953, with implications for humanity and nature A book titled “The Plutocene: Blueprints for a post-Anthropocoene Greenhouse Earth”[ii] elaborates the reasons for the decision by the Atomic Scientists. 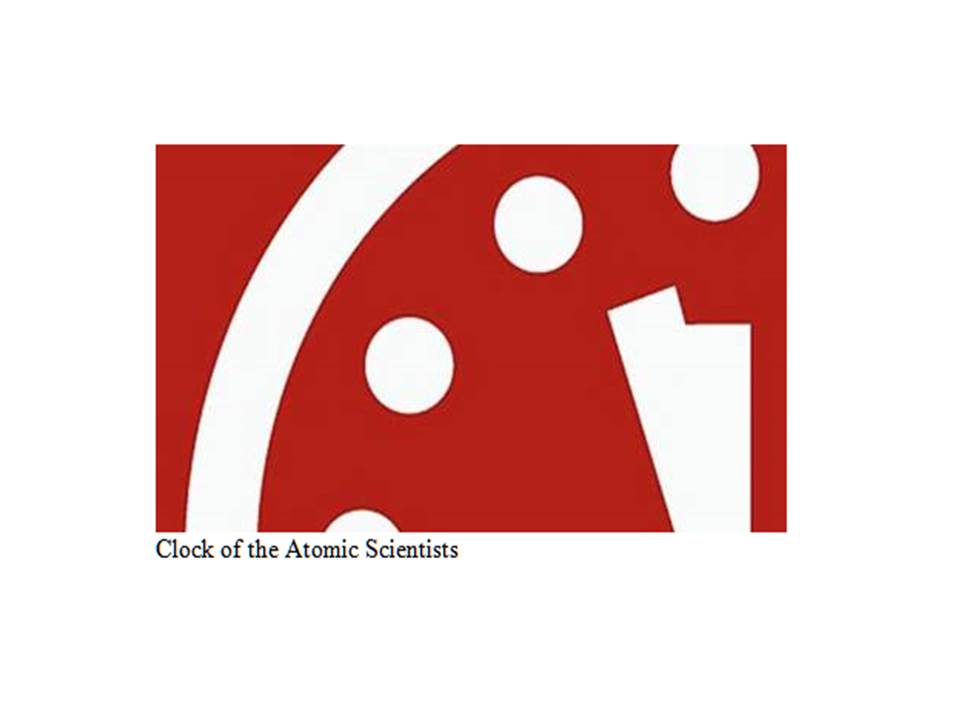 In studying the past geologists use a variety of proxy methods, including the geochemical and isotopic composition of ancient sediments, cave deposits, fossil plants and animals, tree rings, residual organic matter, and the distribution of species in different regions of the Earth[iii]. For periods up to approximately 800,000 years-ago ice cores are particularly useful[iv]. For periods in the order of thousands to tens of thousands of years tree rings[v], the composition of organic matter in soils, fossil plants and animals are important.

None of these methods are available when it comes to projecting the geological record into the future. However the basic laws of physics, the principles of climate science and lessons from past climate trends and events, when coupled with observations of current developments, allow insights into the nature of future events.

The regularity of solar insolation cycles, including the ~100,000 years Milankovic cycle[vi], ~1470 year Bond cycle[vii], the 11 years sun spot cycle [viii]and other insolation regularities are manifest in the geological record.

CO2 levels have reached up to a couple of thousand ppm CO2 during tropical geological periods including the early Devonian ~400 million years [Ma] ago), early Permian (~280 Ma), early Triassic (~200 Ma) and early Eocene (~40 Ma)[ix]. The decline of CO2 levels to a few hundred ppm and less during the Eocene, lowering the temperature of the Earth surface and ensuing in the Antarctic ice sheet, allowed the flourishing of mammal life, leading to the present biosphere, including the appearance of humans.

Based on these observations, as reported in the Intergovernmental Panel for Climate Change (IPCC)[x],  a number of projections of future climates indicate an extension of the current interglacial period by about ~30,000 years, consistent with the longevity of atmospheric CO2[xi]. Future scenarios for the biosphere include Mark Lynas bool “Six Degrees”[xii], Elizabeth Kolbert book “The Sixth Extinction: An Unnatural History“[xiii], and from the nuclear perspective Jonathan Schell’s book “The Fate of the Earth”[xiv] 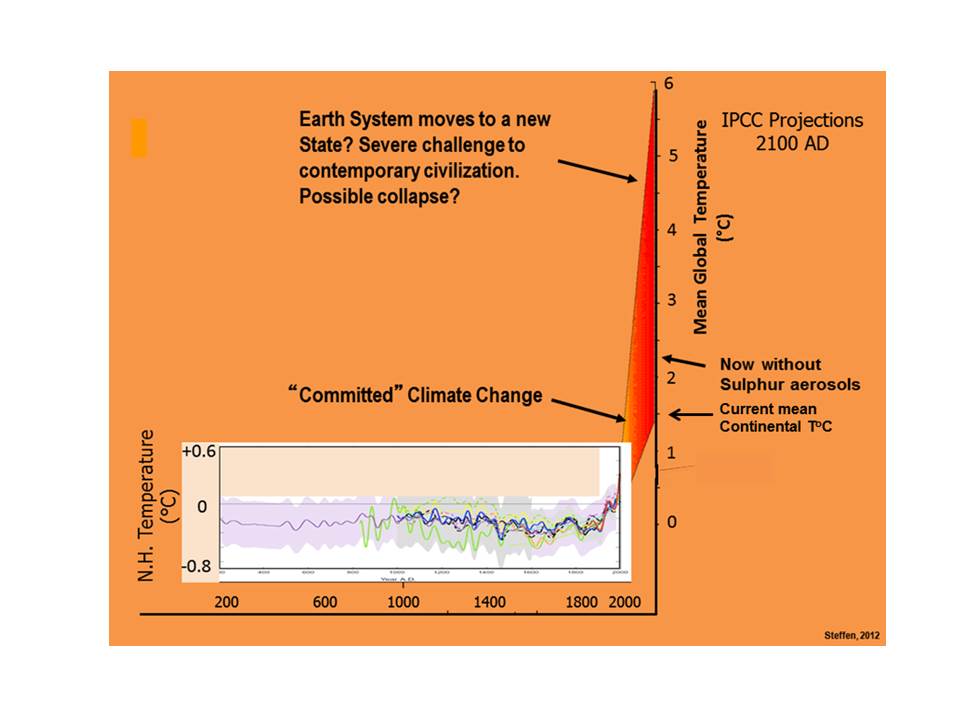 Space exploration, the so-called “new frontier”, is a wonderful thing, but the $billions spent on space are required for defense of terrestrial biosphere which, with the exception of possible bacterial life elsewhere in the solar system, is the only habitable planet we know. Nor can science fiction illusions of an escape from a scorched Earth to some other planet be sustained.

At present climate change denial is reinforced by widespread cover up in much of the mainstream media regarding the manifest connection between global warming and extreme weather events—cyclones, mega-floods and wildfires[xviii].

Compounding the global warming impasse is the nuclear Damocles sword [xix]nuclear warheads, many on hair trigger alert[xx], may be released by accident or design.

These issues are hardly discussed by national leaders and media mouthpieces, preoccupied with parochial issues and overlooking or encouraging carbon emission and export, thus presiding over a Faustian Bargain[xxi] which can only lead to the demise of the biosphere as we know it.

Barring effective sequestration of carbon gases, given amplifying feedback effects from the melting of ice sheets, warming of oceans and release of CO2 and desiccation of land surfaces, the Earth is bound to reach an average of 4 degrees Celsius above pre-industrial levels and higher within a time frame to which numerous species, including Homo sapiens, may hardly be able to adapt. The increase in evaporation from the oceans [xxii]leads to mega-cyclones, mega-floods and super-tropical terrestrial environments. Arid and semi-arid regions become overheated, severely affecting flora and fauna habitats.

The transition to such conditions is unlikely to be gradual. As the globe heats the polarity is increased between ocean regions cooled by an influx of ice melt and regions where warming continues. The consequent increase in climate variability includes sharp transient cool intervals called “stadials”[xxiii]. Increasingly signs of a possible stadial are observed south of Greenland[xxiv].

A close analogy can be drawn between future events and the Eocene-Paleocene Thermal Maximum about 55 million years ago, when release of methane from the Earth crust resulted in extreme rate of rise of temperature (Figure 2). As shown in the figure. The current rise rate of CO2 and temperature exceeds that of the PETM.

Figure 2. A comparison between the rates of mean global temperature rise during: (1) the last Glacial Termination[xxv]; (2) the PETM (Paleocene-Eocene Thermal Maximum[xxvi]; (3) the late Anthropocene (1750–2016), and (4) an asteroid impact. In the latter instance temperature rise would lag by some weeks or months behind aerosol-induced cooling. 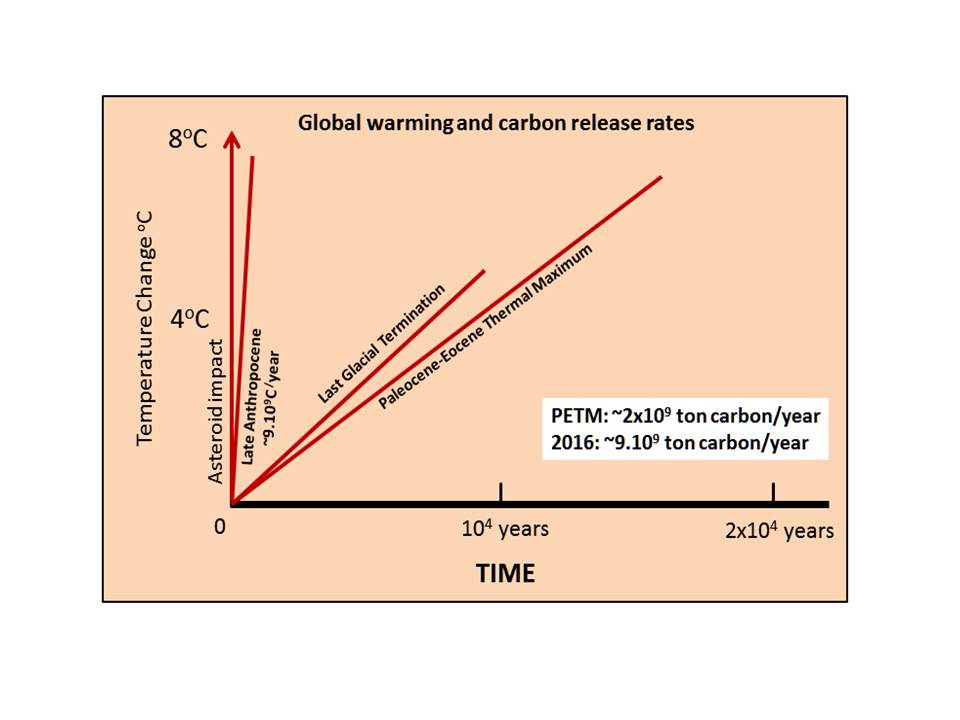 The term “Plutocene”[xxvii] may be coined for a post-Anthropocoene period marked by a Plutonium-rich sedimentary layer in the oceans[xxviii]. Whereas the Anthropocene as currently defined[xxix] constitutes a relatively short period, commenced with the industrial age ~1750 years ago or in 1950 when carbon emissions have risen sharply, the Plutocene would last longer consistent with the longevity of high levels of atmospheric CO2 of up to about 20,000 years[xxx], which is also the half-life of Plutonium.

Such conditions, compounded by high levels of radioactivity consequent on possible to probable conflicts, Could see an onset of a new evolutionary cycle characterized by proliferation of heat and radiation-resistant arthropods. Humans are likely to survive in polar and cooler high mountain regions. At 2.5 minute to mid-night, the only possible way to avoid such calamity is to channel all available resources into planetary defense.

Andrew Glikson, Honorary Associate Professor, Geothermal Energy Centre of Excellence, University of Queensland, an earth and paleo-climate scientist and graduate from the University of Western Australia, conducted geological surveys of ancient geological formations in central and western Australia, Queensland, South Africa, India and Canada, and studied large asteroid impacts, including effects on the atmosphere and oceans and mass extinctions of species. Since 2005 he has been studying the relations between climate, fire and human evolution. Emails: Andrew.Glikson@anu.edu.au; geospec@iinet.net.au

Anticopyright: Editorials and articles originated on TMS may be freely reprinted, disseminated, translated and used as background material, provided an acknowledgement and link to the source, TMS: 2.5 Minute to Midnight, is included. Thank you.