A Perfect Marriage: Evangelicals and Conservatives in Latin America 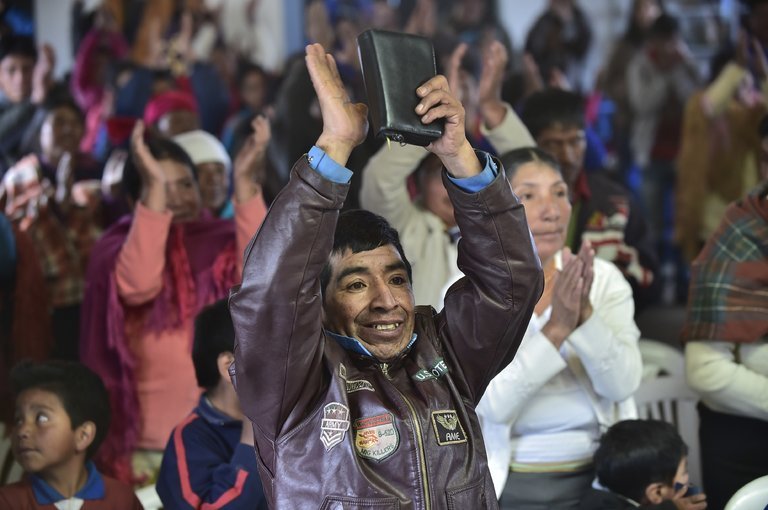 17 Jan 2018 — Evangelical churches today can be found in almost every neighborhood in Latin America — and they are transforming politics like no other force. They are giving conservative causes, and especially political parties, new strength and new constituencies.

In Latin America, Christianity used to be associated with Roman Catholicism. The church held a near monopoly on religion until the 1980s. The only challenge to Catholicism was anticlericalism and atheism. There has never been another religion. Until now.

Evangelicals today account for almost 20 percent of the population in Latin America, up from 3 percent three decades ago. In a few Central American countries, evangelicals are near majorities.

Evangelical pastors embrace varied ideologies, but when it comes to gender and sexuality, their values are typically conservative, patriarchal and homophobic. They expect women to be completely submissive to their evangelical husbands. And in every country in the region, they have taken the strongest stands against gay rights.

The rise of evangelicalism is politically worrisome. Evangelicals are fueling a new form of populism. They are supplying conservative parties with nonelite voters, which is good for democracy, but these voters tend to be intransigent on issues of sexuality, which feeds cultural polarization. Intolerant inclusion, which is the classic Latin American populist formula, is being reinvented by evangelical pastors.

Brazil is a prime example of the rising evangelical power in Latin America. The 90 or so evangelical members of Congress have thwarted L.G.B.T.-oriented legislative actions, played a role in impeaching the leftist president, Dilma Rousseff, and shut down museum shows. An evangelical pastor has been elected mayor of Rio de Janeiro, one of the world’s most gay-friendly cities. So grand are their successes that evangelical pastors elsewhere say they want to imitate “the Brazilian model.”

And that model is spreading. With the help of Catholics, evangelicals have also organized anti-gay marches in Colombia, Costa Rica, the Dominican Republic, Peru and Mexico. In Paraguay and Colombia, they compelled the ministries of education to ban books dealing with sexuality. In Colombia, they even mobilized to defeat a referendum on a peace accord with the FARC, the largest guerrilla group in Latin America, arguing that the accords pushed feminism and L.G.B.T. rights too far.

How have evangelicals become so politically powerful? After all, evangelicals, even in Brazil, are still a minority, and in most countries, irreligiosity is also rising. The answer has to do with their new political tactics.

No tactic has been more transformative than the decision by evangelicals to forge alliances with political parties on the right.

Historically, right-wing parties in Latin America tended to gravitate toward the Catholic Church and disdain Protestantism, while evangelicals stayed out of politics. Not anymore. Conservative parties and evangelicals are joining forces.

Chile’s presidential election in 2017 provided a perfect example of this union of pastors and party. The two center-right candidates, Sebastián Piñera and José Antonio Kast, courted evangelicals. Mr. Piñera, who won, even had four evangelical bishops as campaign advisers.

There is a reason conservative politicians are embracing conservative evangelicalism. Evangelicals are solving the most serious political handicap that right-wing parties have in Latin America: their lack of ties with nonelites. As the political scientist Ed Gibson noted, parties of the right used to draw their core constituency from the upper strata. This made them electorally weak.

Every weekday, get thought-provoking commentary from Op-Ed columnists, the Times editorial board and contributing writers from around the world.

Evangelicals are changing that. They are bringing in voters from all walks of life, but mostly the poor. They are turning right-wing parties into people’s parties.

This marriage of pastors and parties is not a Latin American invention. It’s has been happening in the United States since the 1980s, as the Christian right gradually became arguably the most reliable constituency in the Republican Party. Even Donald Trump — who many see as the antithesis of biblical values — ran on an evangelical platform. He chose his running mate, Mike Pence, precisely for his staunch evangelicalism.

That there is convergence between the United States and Latin American on evangelical politics is no accident. American evangelicals coach their counterparts in Latin America on how to court parties, become lobbyists and fight gay marriage. Few other civic groups enjoy stronger external ties.

In addition to forming alliances with parties, Latin American evangelicals have learned to make peace with their historic rival, the Catholic Church. At least on the issue of sexuality, pastors and priests have found new common ground.

The latest example of cooperation has been in framing — the language political actors use to describe their causes. For social scientists, the more actors manage to frame an issue to resonate for multiple constituencies, not just the core constituency, the more likely they are to influence politics.

In Latin America, both Catholic and evangelical clergymen have come up with an effective frame for their conservatism: opposition to what they have baptized the “ideology of gender.”

This term is used to label any effort to promote acceptance of sexual and gender diversity. When experts argue that sexual diversity is real and gender identity is a construct, evangelical and Catholic clergies respond that this is just ideology, not science.

Evangelicals are keen on stressing the word “ideology” because this gives them the right, they argue, to protect themselves, and especially their children, from exposure to these ideas. Ideology of gender allows them to call for the protection of children as cover for homophobia.

The political beauty of “ideology of gender” is that it has given clergymen a way to recast their religious stand in secular terms: as parents’ rights. In Latin America, the new Christian slogan is, “Don’t mess with my kids.” It is one of the results of this evangelical-Catholic collaboration.

This truce poses a dilemma for Pope Francis, now on tour in Latin America. On the one hand, he has expressed rejection of extremism, and a desire to connect with the most modern, even liberal groups in the church. On the other hand, this pope has made “Christian encounters” a hallmark of his papacy, and he himself is not entirely allergic to the cultural conservatism of evangelicals.

As a political actor, the pope worries too about the church’s waning influence in politics, so an alliance with evangelicals seems like the perfect antidote against its political decline. A pressing question the pope needs to ponder is whether he is willing to pay the price of greater conservatism to rekindle Christian power in Latin America.

Evangelicalism is transforming parties and possibly the Catholic Church. Conservative parties used to think of themselves as the region’s essential check against populism. That pitch is no longer credible. These parties are realizing that going along with pastors generates voter excitement, even if only among churchgoers, and excitement equals power.

Javier Corrales, a professor of political science at Amherst College, is a co-author, with Michael Penfold, of “Dragon in the Tropics: The Legacy of Hugo Chávez in Venezuela.”

A version of this op-ed appears in print on January 18, 2018, on Page A10 of the National edition with the headline: Evangelicals and Latin America.