30 Dec 2017 – As the conflict in Yemen passes the grim 1,000-day milestone, the United Nations is warning that if humanitarian workers cannot gain greater access and the violence does not subside, the cost in lives will be incalculable.

“As violence has escalated in recent days, children and families are yet again being killed in attacks and bombardments,’ the heads of key UN agencies said Friday in a joint statement, as they once again appealed to parties to the conflict to immediately allow full humanitarian access in Yemen and to stop the fighting. 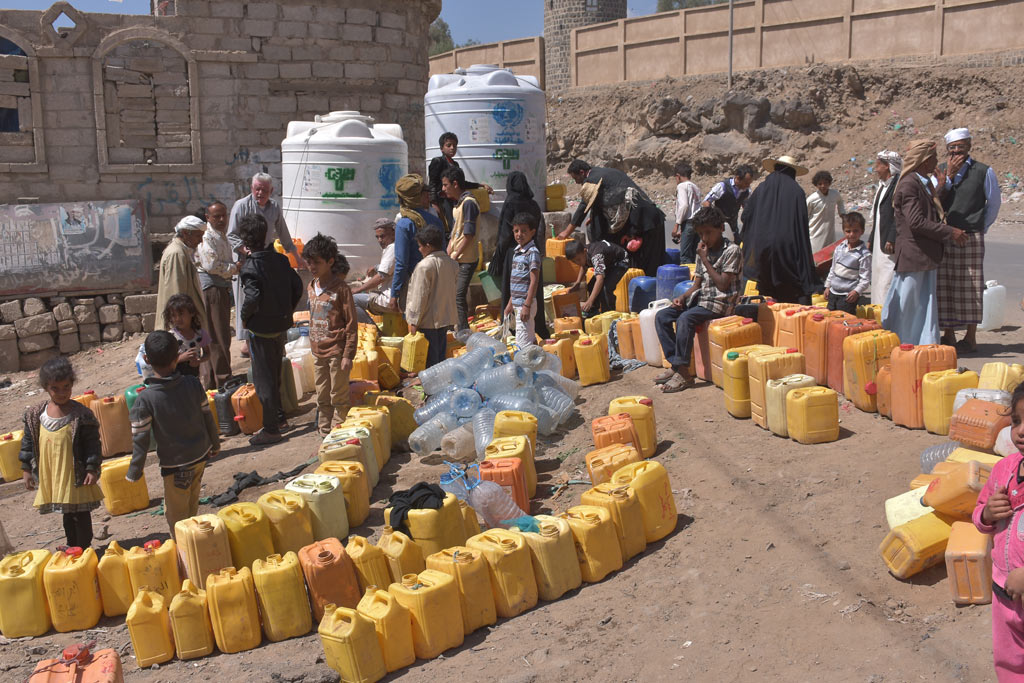 People queue to fill containers with water from a tank provided by UNICEF in Sana’a, Yemen. Some 14.5 million people in the country have no access to safe drinking water and adequate sanitation.
Photo: UNICEF/Algabal2017

“More than 1,000 days of children recruited to fight […] 1,000 days of disease and death [and] of unimaginable human suffering,” they said, adding that the conflict has created the worst humanitarian crisis in the world – a crisis which has engulfed the entire country.

Some 75 per cent of Yemen’s population is in need of humanitarian assistance, including 11.3 million children who cannot survive without it. At least 60 per cent of Yemenis are now food insecure and 16 million people do not have access to safe water and proper sanitation. Less than half of Yemen’s health facilities are fully functional and medical staff has gone months without being paid their salaries.

“This horrific tally of the conflict’s devastation reflects only what we know. In reality, the situation is likely to be worse. UN agencies do not have full humanitarian access to some of the hardest hit communities. In many, we cannot even assess their needs,” the UN leaders explained.

“But this we do know: Yemen has passed the tipping point into a rapid decline from crisis to deepening catastrophe.”

RELATED: The UN relief wing has more on the Yemen crisis

While acknowledging some progress in recent days with the first commercial fuel imports allowed into Hudaydah port, following recent commercial food imports, the agency chiefs said it is critical that these supplies are maintained, as restrictions on fuel imports have caused the price of diesel fuel to double, threatening access to safe water and sanitation, and urgent medical care.

Far too many hospitals are short of fuel for the generators that allow them to stay open. Water pumping stations serving over three million people are quickly running out of the fuel they need to operate, while the price of commercially trucked water has increased up to six-fold.

“Safe water is now completely unaffordable for more than two thirds of Yemenis living in extreme poverty. All of this threatens to undermine efforts to contain the ongoing, deadly outbreaks of diphtheria, cholera and acute watery diarrhea,” they warned.

“We remain committed to helping the people of Yemen. We have reached nearly six million people with clean water, distributed 3.7 million litres of fuel to public hospitals, treated more than 167,000 children for severe acute malnutrition,” they noted but warned: “Yet worsening conditions on the ground threaten to overwhelm our capacity to respond.”

“Yemen’s families should not have to withstand another day of war, let alone another 1,000,” the UN leaders concluded.