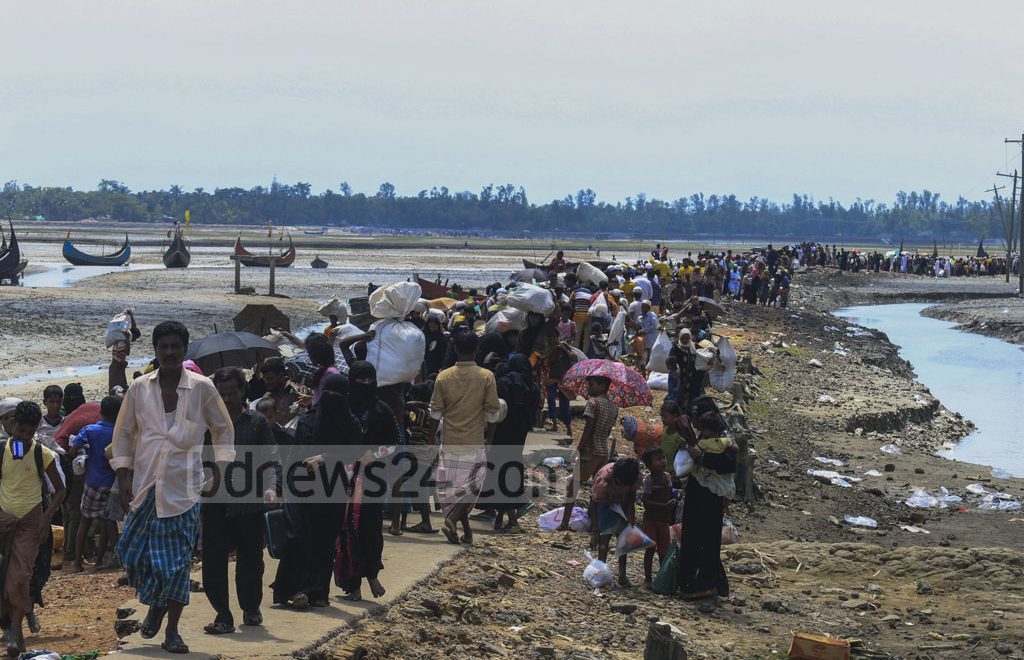 22 Jan 2018 – Yesterday I was deep in thought remembering the difficult journey I made from Kolkata to Dhaka all those years ago in 1972. However, my current deep concern is the uncertain plans of repatriation to the Rakhine State of Myanmar of the Rohingya refugees. The contrast between January 1972 and January 2018 cannot be more different or pronounced. The Bangladeshi refugees in 1972 wanted to return to their homes in Bangladesh. A certain number of relations, friends and neighbours were waiting to welcome them home. Even so, there was a degree of fear and uncertainty among the Bangladeshis regarding what would they find when they returned home. A village house burned down or a town house ransacked?

For the Rohingya refugees there is far more uncertainty and fear. There are no declared guarantees. What about their rights to citizenship, security, shelter, food, health, education and to be able to practice their religion? If they agree to move to a “Temporary Transit Camp”, it might turn into a camp for “internally displaced” or a “concentration camp”. Who is going to guarantee what? I remember clearly talking to a 55 yr old Rohingya woman in October 2017 who said that with her journey to Cox’s Bazar in September 2017, it was the third time that she has come to Bangladesh as a refugee and this time she will not go back! International bodies such as UNHCR and ICRC must be allowed to oversee the whole process from a legal and humanitarian point of view.

However, returning to my memories of 1972, I had been responsible, for many months, for coordinating the assistance for up to 600,000 Bangladeshis in over 50 refugee camps in the border areas of India and I set off on January 20th 1972 with an Oxfam Landrover and trailer laden with valuable medicine and high protein food for children. My driver, Badol Nandi, had come from Chittagong in May 1971 and was the very first of 13 drivers recruited by Oxfam for the enormous refugee relief operation. I was also accompanied by a most dedicated British nurse, Jean Taylor, who, having worked in the refugee camps for a number of months, had volunteered to work in Dhaka with Mother Teresa’s ‘Missionaries of Charity’. 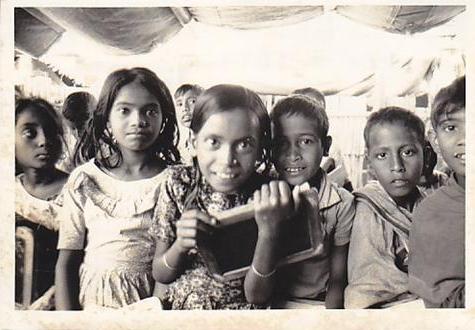 Although we set off in good time on Jan 20, 1972, the road to Bongaon/Benapol was choked with Bangladeshi families walking home and so our speed was very slow. We halted briefly at the Gandhian Abhoy Ashram in Bongaon and the Catholic Mission, both places having cared for, with Oxfam’s support, many thousands of refugees since April 1971. Both these institutions were on hand to make sure that the families of refugees returning to their villages in Bangladesh had packets of food and water, blankets and warm clothing. The scene at the actual border crossing was chaotic and it was impossible to get one’s passport stamped. As the rate at which we were traveling was so slow, we realised that we would have to spend the night somewhere en route. We headed to a Catholic Mission Hospital in Jessore which Oxfam had assisted in the past and they gave us a very warm and generous welcome. An Italian Priest had been gunned down a few months before by the Pakistani Army. This was the price he paid for providing medical treatment to the Mukti Bahini fighters.

After a most welcome rest and a nourishing breakfast provided by the Sisters, we set off again hoping to arrive in Dhaka in the afternoon. Again the roads were full of families struggling to get home, but what also slowed us down were the number of culverts and bridges which had been destroyed and at times we could only manage to progress by using the 4 wheel drive facility of the Landrover. We passed by many burnt out and destroyed villages and at some, the owners of the burnt down houses had just returned and were sitting among the ashes, shell-shocked and in tears. On the way, we came across the 10 year old daughter of one family who had collapsed with exhaustion caused by dysentery. Our nurse companion, Jean Taylor, examined her and said that we must get her to hospital as soon as possible. So we took the girl and her father and left them at a Thana hospital and handed over some IV sets and medicines too. Eventually, at about 2pm on Jan 21, we found that we were in a long line of vehicles and people waiting for the ferry. When we eventually drove up the ramp to enter the ferry, we found there was not enough room for our vehicle and trailer. We unhooked the trailer and maneuvered it in but when we tried to fit the Landrover inside the ferry, we had to come up the ramp at an angle. We nearly got in safely but the back left hand wheel was still on the top of the ramp. Some of the ferry staff said we could move in that position, but the captain of the ferry said that he could not allow it. Some passengers, wondering what the delay was all about, came to the loading area to express their anger. Some of them, however, had been in some of the Oxfam supported refugee camps. With cries of ‘Joi Bangla’ and ‘Joi Oxfam’, about 10 men lifted up the back of the Landrover and inched the vehicle further inside the ferry so that the ramp could at last be raised. The ferry crossing seemed to take ages, over 3 hours, and we had time to eat some very welcome ‘dal bhat’. Once across the mighty Padma river, again our progress was very slow along the narrow concrete strip road, negotiating yet more broken bridges and culverts. I have a vivid memory of passing the old airport at about 12 midnight with neither a person nor a vehicle in sight. Suddenly, we found ourselves surrounded by army and police personnel who appeared, it seemed, from nowhere. We discovered that there was a 10pm to 5am curfew in place, but after we had identified ourselves, we were given a friendly escort to the Purbani Hotel in Motijheel. Oxfam’s disaster-hardened Jim Howard, had arrived from London the day before, and welcomed me to share his double room. I do not remember ever feeling so tired as I did that day.

I stayed in Bangladesh for a few days assisting Jim in his discussions with government officials and aid agency workers. We were advised by the British High Commission and other aid officials to pay a courtesy call on Sheikh Mujib. My meeting with him, which was fixed up by Tajuddin Ahmed who I had met a few times in Kolkata during 1971, is one I will never forget. I told Sheikh Mujib that I wanted his advice about what a small organisation like OXFAM might be able to do to assist in the rehabilitation and development of Bangladesh. Sheikh Mujib took his pipe out of his mouth and pointed the stem of the pipe at me. “How did you come here, young man?” he asked in a booming voice. I told him that I had driven overland from Kolkata. “In that case”, he told me, “You have seen more of my country than I have, as I was a prisoner for over 9 months, so please tell me what you think my country needs. What have you seen?”

I told Sheikh Mujib that I had seen many villages that had been burnt down, many bridges and culverts blown up and many ferries and launches, large and small, sunk in the rivers. I told Sheikh Mujib that, on behalf of OXFAM, I had already ordered, in India, £250,000 worth of C.I. sheets for a big house rebuilding programme and these would arrive by early March. I added that I thought that bridge building and replacement and repairs of ferries were more suited to bilateral and multilateral aid. “No”, Sheikh Mujib said, “Ferries are and will be the lifelines for my people. Please discuss with officials of the Bangladesh Inland Waterways Authority and see what OXFAM can do.”

Before I left him, Sheikh Mujib asked me about my experiences working with the people of Bangladesh in the refugee camps. As I spoke, emotion got the better of me and tears welled up in my eyes. Sheikh Mujib put his arm around me to comfort me and said, “Go young man, be strong, and thank you for coming to see me and for helping Bangladesh.”

As a result of the meeting with Sheikh Mujib, OXFAM was able to procure 3 truck-carrying ferries and to assist the repair of many others. I remember that the Bangladesh Inland Waterways Authority wanted, understandably, to name the ferries after Liberation War martyrs, but after the experience of getting to know the flora and fauna of Bangladesh and how they are part of the country’s poetry and music, we requested that the vessels be named after flowers. And so, Kamini, Kosturi and Korobi, were so named and they, I believe, continue to ply across the Padma River at Mawa to this day, more than 46 years later.

During my short visit to Bangladesh more than 46 years ago, it was obvious that the two greatest needs were food and the restoration of the transport system with which to move the food around the country. OXFAM’s Overseas Aid Director at that time, Ken Bennett, wrote in a report, a short while after my January 1972 visit, “I doubt if it would be an exaggeration to say that on the extent to which a solution to the problem of food imports and the restoration of communications can be quickly found may well depend the future of Bangladesh as a State.” It is to Bangladesh’s immense credit that it has survived and prospered and is now self sufficient in the production of basic food grains which can be moved efficiently around the country. In addition, Bangladesh, by 2015, had achieved most of the Millennium Development Goals and is now focused on the achievement of the Sustainable Development Goals (SDGs).

And so, while so clearly remembering the momentous journey that I undertook in January 1972, I come back to 2018 and the current very real concerns of the plight and future of the Rohingya refugees. It is clear that the Burmese Buddhists have had decades old plans to get rid of the Rohingyas from Rakhine State. It is very difficult to see how they will be welcomed back to their villages where many of their relations, friends and neighbours were brutally killed.

Julian Francis has been associated with relief and development activities of Bangladesh since the War of Liberation. In 2012, the Government of Bangladesh awarded him the ‘Friends of Liberation War Honour’ in recognition of his work among the Bangladesh refugees in India in 1971.