Stepping Stones to Change in Afghanistan

Dec 2017 – Amrullah has a small frame and a soft voice. He used to have a reputation as a fighter and would fight with the rich kids. He’d get angry because they had nicer clothes. By fighting, he wanted to show his power. But now, at age 11, he believes that fighting is bad. When he sees those same boys, he says he no longer cares to fight.

“They have their way,” he says. “I have my way, and my way is nonviolent.”

The other boys asked Amrullah why he stopped fighting, but when he explained his new way of thinking, they couldn’t understand.

Amrullah has studied nonviolence at the Street Kids School, in Kabul, Afghanistan, for almost three years. The school, with 94 students this year, is a project of the Afghan Peace Volunteers (APVs) at the Borderfree Nonviolence Community Centre. There, the students also gain literacy and math skills, supplementing their lessons at the government schools. Each month, they receive modest food rations. The students become empowered as the stories and ideas they share in class become woven into later school lessons. In March, 2018, Amrullah and other third-year students will graduate. The hope is that they will continue their general studies in the public schools.

The third-year students are now taking an extra class, participating in the Bridge Program. This program introduces these students to the 17 volunteer teams at the center, from organic gardening to the duvet project (a women’s income-generating project involving sewing and distributing wool-stuffed blankets). In last Friday’s Bridge class, students explored how to work as a team and how to prepare for the challenges they will inevitably face if they decide to volunteer in one of the Borderfree projects.

Some of the students at the school used to work in Kabul’s streets. Others still do. Save the Children estimates that there are 2.2 million Afghan children between the ages of 8 and 14 who need to work.

Around age five, Amrullah began helping his father, who can’t speak, to rent glasses and other items to families for special occasions. Though his parents didn’t study, his father encouraged Amrullah to attend school instead of continuing to help him. His father doesn’t want Amrullah to struggle as he does.

Even though the food rations will end upon his graduation, Amrullah believes his father will support his desire to volunteer at the center.

Like Amrullah, Adila attends the Bridge class. She used to be a child laborer, selling bolonis, filled Afghan pancakes. Four years ago, Adila came to Kabul from Baghlon province to live with her aunt. Together they live in a single room with no stove to warm them from the winter cold. Her biggest challenge is convincing her father to permit her to stay in Kabul to study. She thinks her parents might call her back to the province.

“In Kabul there are a lot more opportunities to study,” she says.

Now in seventh grade, Adila wants to continue her studies, to go to university, and to become a doctor. Then she sees herself returning to Baghlon to help others. She likes doing nonviolence work because in a safe area, in an area without fighting, she and others can study better.

Seated a few chairs away from Adila is Sakina, age 11, who used to sell cigarettes and other small items. Now she works in her father’s vegetable shop. She has six sisters, and all of age to attend school.

Sakina is especially interested in joining the Borderfree cycling club after graduation.

“Riding a bike makes me happy,” she says.

When Sakina first told her parents she wanted to ride a bike, her father was a little angry and told her he couldn’t buy her a bike. Sakina has decided to ride, it seems, without informing her parents. Sakina believes that girls and boys must have the same rights and opportunities. She’s now in fifth grade.

The role models for Amrullah, Adila, and Sakina are most importantly the student volunteer teachers and coordinators at the Street Kids School. Both Zekrullah, who is a co-coordinator of the school, and Nemat, who used to teach nonviolence there and is now the coordinator of another team, were once child laborers themselves. 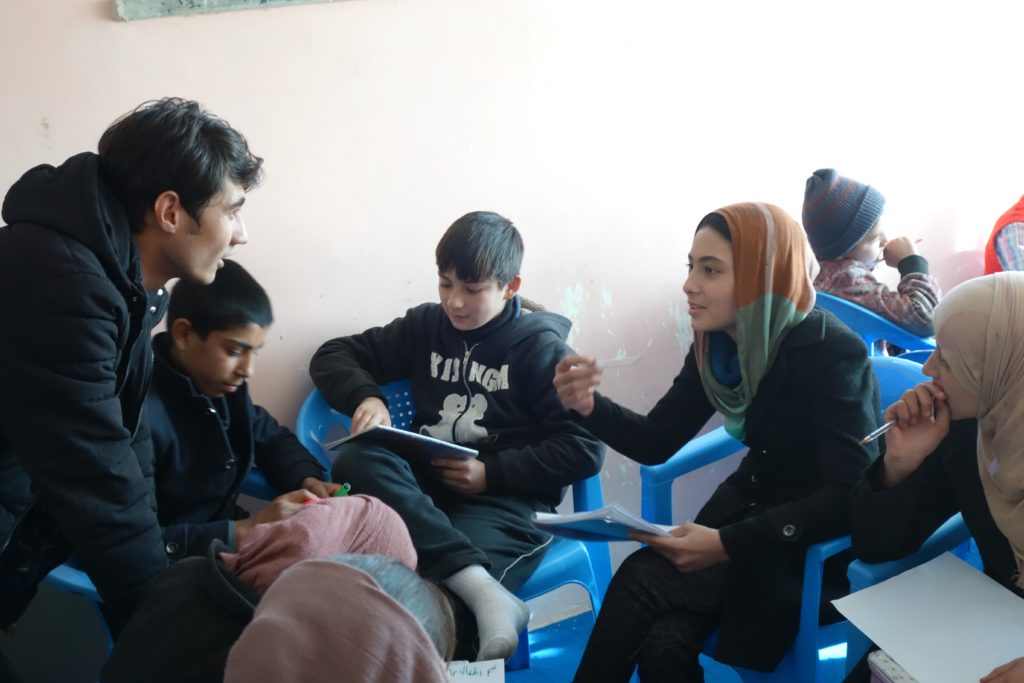 In three years, the students have learned peace building techniques and have become confident readers. Still, their lives will remain difficult. Naser, a Kabul University student and one of the Bridge class teachers, has worries. A few nights ago, he went to the market to buy some food and was saddened to see one of the students in the street selling sunflower seeds. It was late for people in Kabul to be outside yet there was a young girl alone working.

Food and economic insecurity are further complicated by safety concerns. When Naser talks to others in the street, they say they are not sure if they will be alive or not the next day. The violence extends to the Afghan education system, Naser adds, recalling school teachers hitting him or having him stand on one leg for a long time if he didn’t complete his homework.

Naser shares all of these challenges after I ask him what makes him happy, so I begin to believe that he has misunderstood me, but then he turns the idea around. It is because he knows all of the challenges in Kabul that seeing boys and girls in school make him happy, really happy. “Education is the path, especially in Afghanistan,” he says, “toward positive change–toward a green, equal, and nonviolent world.”

Carolyn Coe is in Kabul, representing Voices for Creative Nonviolence (www.vcnv.org).  While there, she is a guest of the Afghan Peace Volunteers (www.ourjourneytosmile.com).

Anticopyright: Editorials and articles originated on TMS may be freely reprinted, disseminated, translated and used as background material, provided an acknowledgement and link to the source, TMS: Stepping Stones to Change in Afghanistan, is included. Thank you.