22 Dec 2017 – The total number of suspected cholera cases in Yemen has crossed one million, the United Nations World Health Organization (WHO) reported today, urging greater efforts to tackle the outbreak and deal with the deteriorating health situation in the war-torn nation.

“The epidemic is not yet over and more concerted efforts need to be deployed to ensure that it is controlled in the immediate term and prevented from reoccurring in the near future,” WHO spokesperson Tarik Jašarevic told a press briefing in Geneva.

Responding to the deadly outbreak in late April, WHO set up treatment centres, provided supplies, trained health workers, and worked with local communities on ways to prevent the disease.

These efforts resulted in tens of thousands of lives being saved.

According to WHO, 99.7 per cent of the people who became sick with suspected cholera and who could access health services survived.

The UN agency continues to support dehydration treatment centres across the country as well as collect stool samples for lab testing, transport them to labs, meet operational costs and make available supplies and reagents. 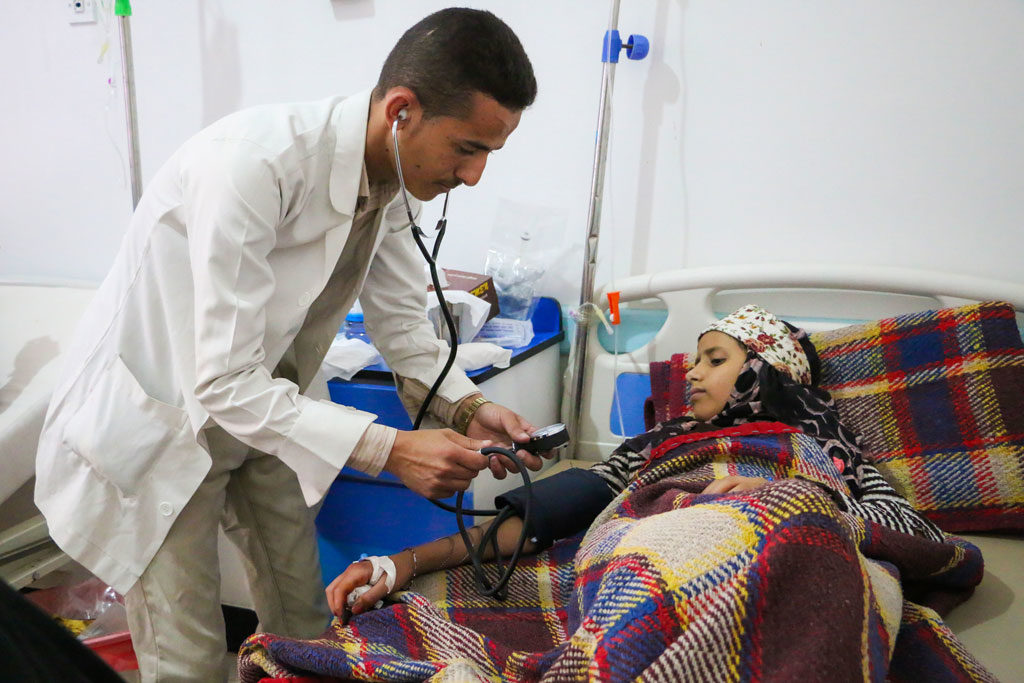 At the Al Sab’een Hospital in Sana’a, Yemen, a doctor checks on a girl suffering from cholera.
Photo: UNICEF/UN066510/Fuad

One Outbreak after Another

With its health and sanitation systems in near ruin, Yemen is also now experiencing a rapidly spreading diphtheria outbreak, which has affected 18 of its 22 governorates. About 333 clinically diagnosed cases (mostly in Ibb and Hodeida governorates) have been confirmed.

Diphtheria – a highly-infectious disease caused by the bacterium Corynebacterium diphtheria that infects the throat and upper airways, and produces a toxin affecting other organs – can be prevented with vaccines and treated with antitoxins and antibiotics.

But lack of medicines in the country mean the number of cases could rise.

Responding to this latest outbreak, the UN Children’s Fund (UNICEF) airlifted some 6 million doses of essential vaccines for children, include inoculations for diphtheria.

WHO has also delivered antibiotics and 1,000 vials of life-saving diphtheria antitoxins to affected governorates.

“If [we] cannot bring in medicines and medical supplies, we cannot save lives.”
— WHO spokesperson

But the fact that the outbreak is occurring amid a complex emergency setting with violent clashes and restrictions of transport of supplies, including medical supplies, means response efforts are extremely difficult.

Underscoring the need for unhindered and sustained access to all areas of Yemen to save lives, the WHO spokesperson asked the Yemeni authorities and all parties to the conflict to facilitate the importation and distribution of medicines and medical supplies, as well as clearances for health partners to reach and treat affected communities.

“If [we] cannot bring in medicines and medical supplies, we cannot save lives,” he stressed.