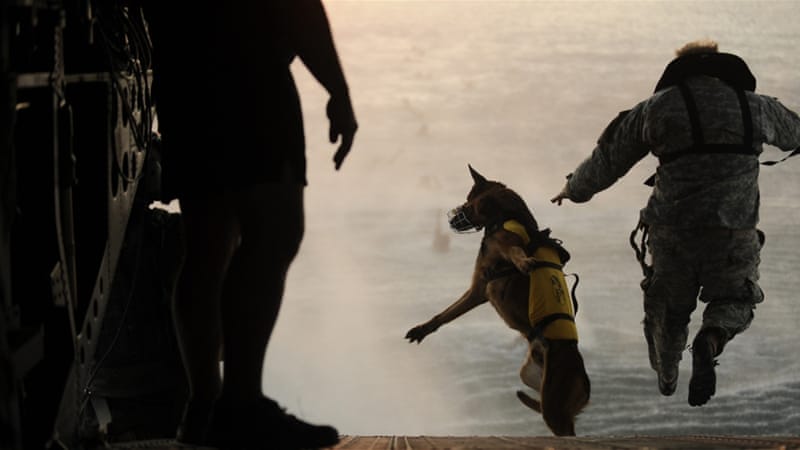 A US Army soldier with the 10th Special Forces Group and his military working dog jump off the ramp of a helicopter, during water training over the Gulf of Mexico.
[Martinez/US Air Force/Reuters]

16 Jan 2018 – The Special Operations forces of the United States – currently 70,000-strong and thus larger than the regular militaries of many sizable countries – occupy a very special place in US national mythology.

According to TIME Magazine, Special Ops “heroes” are the “planet’s most skillful soldiers” and “toughest warriors” – operating in their very own “secret world”.

Newsweek hails them as “dead accurate, lethal and all-but-silent. They are the military’s elite – highly trained badasses armed with bullets and brains in equal measure”.

The obsequious glorification of “badass” warriors is of course hardly surprising, given that US society has been inculcated to view international relations as a sort of video game in which the US gets points for blowing things up.

More surprising, perhaps, are the dimensions of the oh-so-secretive world.

In a recent dispatch, investigative journalist and author Nick Turse reveals that Special Operations forces were active in no fewer than 149 countries in 2017 – meaning that the “secret world” has managed to encompass 75 percent of the globe.

This record high is courtesy of US President Donald Trump, that self-appointed “very stable genius” who is now building on the special forces frenzy fuelled by his predecessors, Barack Obama and George W. Bush.

The US Special Operations Command was officially established in 1987, but the appeal of its services grew considerably among the US political establishment in the aftermath of the 9/11 attacks.

Now, Turse writes, the push to further expand Special Operations “comes at a moment when [various US senators] continue to acknowledge how remarkably clueless they are about where those elite forces are deployed, and what exactly they are doing in far-flung corners of the globe”.

He refers to the shock expressed by certain officials in Washington in 2017, following the news of the demise of four Special Operations commandos in the West African country of Niger.

Other clues as to US activity in Africa – where the present significant expansion of Special Ops activity surely has nothing to do with copious resources found on that continent – can be found in headlines like: “Strong Evidence that US Special Operations Forces Massacred Civilians in Somalia”.

Anyway, a negative headline here and there is a small price to pay for a “secret” army largely exempt from public – and even governmental – scrutiny.

Speaking of prices, a September New York Times article quotes a former special forces commander who speculates that it “probably costs closer to $1.5 million” to train a special forces soldier these days.

Add to this the hefty subsequent costs of deployment and equipment – not to mention the financial demands of a conventional US military that is itself none too tiny – and it’s no wonder the US has no pennies to spare for trivial things like healthcare.

“Combat boots every one of them”

One of the major selling points of Special Operations forces is that their footprint is perceived to be light, a perception buoyed by the US habit of referring to deployed forces as “advisers” and “trainers” even when these forces are directly engaged in combat.

A November TIME Magazine article quotes an assessment of the arrangement by former Navy SEAL-turned-Republican-congressman Scott Taylor: “It’s easier to put ‘trainers’ and ‘advisers’ in a country and say we don’t have ‘boots on the ground’ … Well, that’s bullshit. They’re combat boots, every one of them.”

As for what certain boots on the ground have been up to in places like Iraq and Syria, the US-led coalition against the Islamic State of Iraq and the Levant (ISIL, also known as ISIS) was lambasted last year for its use of white phosphorus munitions, prohibited in civilian areas under international humanitarian law. Amnesty International suggested that the coalition’s reliance on white phosphorus on the outskirts of Raqqa – ISIL’s former self-declared capital in Syria – “may amount to a war crime”.

Indeed, one gets an idea of the effectiveness of phosphorus munitions from a passage in veteran Middle East journalist Robert Fisk’s book Pity the Nation, which quotes a Beirut doctor on the incendiary aftermath of Israel’s use of phosphorus shells in Beirut in 1982:

“I had to take the babies and put them in buckets of water to put out the flames. When I took them out half an hour later, they were still burning. Even in the mortuary, they smouldered for hours.”

White phosphorus aside, the US Special Operations forces have been implicated in other carnage, as well – including by assisting in the coordination of air attacks in various conflict zones.

In the battle for Mosul, Iraq – which ended in July 2017 and also involved plenty of US “advisers” doing more than advising – NPR reported that “more civilians than [ISIL] fighters are believed killed.”

The Independent also reported a “civilian casualty rate” in Mosul “nearly 10 times higher” than the official one: “As coalition and Iraqi government forces increased their pace, civilians were dying in ever higher numbers at the hands of their liberators.”

A precise casualty count has been thwarted by a number of factors, including that many bodies remain under the rubble and that, as the Independent notes, “The Americans say they do not have the resources to send a team into Mosul.”

Apparently, a country with an annual defence budget in the hundreds of billions of dollars – and unilateral entitlement to invade and bomb sovereign nations at will – can’t be expected to count the dead.

Meanwhile, in response to a growing perception that US special forces are stretched to the limit, US Defence Secretary James Mattis has brought up the possibility of having conventional forces assume some of their tasks.

Such an adjustment would not, however, constitute a retreat from the Special Ops obsession, but rather a reinforcement of the culture of the “badass” warrior – who, “work[ing] almost entirely in the shadows”, as Newsweek puts it, has helped the US war-making apparatus permeate the globe.

And the shadows, it seems, have gotten even darker with the ascension of the aforementioned “very stable genius” to the role of military commander-in-chief, one who spends his time threatening North Korea with nuclear annihilation and otherwise scoffing at the idea of any sort of accountability to humanity.

In fact, as the US marches on towards perpetual war, it’s nearly impossible to detect a bright side.

One Response to “The United States: Addicted to Special Forces”