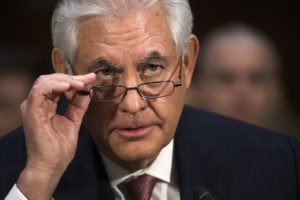 The button, reportedly measuring a massive eight inches in diameter, has been a subject of considerable alarm for Trump’s national-security team since he had it installed on his desk, earlier in the week.

According to White House sources, Tillerson, Secretary of Defense Jim Mattis, and the national-security adviser H. R. McMaster drew straws late Tuesday night to determine who would carry out the high-stakes disconnection mission.

After Tillerson drew the shortest straw, he decided to enter the Oval Office surreptitously Wednesday morning while Trump took a bathroom break.

The Secretary of State had crawled under the desk and was on the verge of disconnecting the gigantic button when he was surprised by the sudden entrance of Vice-President Mike Pence, who had arrived to deliver his daily praise of Trump.

Flustered, Tillerson muttered something about “looking for my glasses” and quickly exited.

Tillerson, who suffered a gash to the head when he bumped it on Trump’s desk, was resting comfortably at Walter Reed Army Medical Center, where he was heard repeatedly mumbling the words “button” and “moron.”