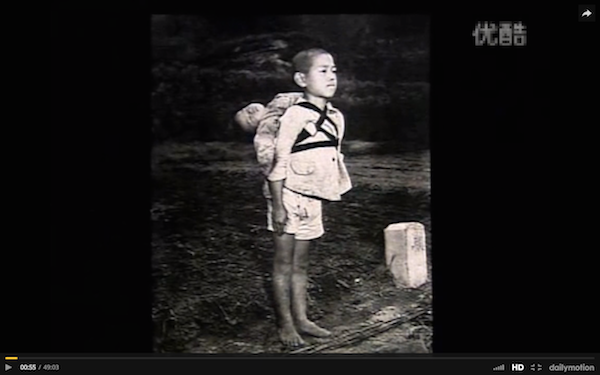 Joe O’Donnell’s “The boy standing by the crematory” features on a card distributed by Pope Francis. (Provided by Vatican Press Office)

5 Jan 2018 – A barefoot boy, probably around 10 years old, waits in line at a crematorium. Strapped to his back is his dead baby brother. Staring straight ahead, the boy utters no words.

This photo, titled “The boy standing by the crematory,” was taken in Nagasaki at the end of World War II by U.S. Marine photographer Joe O’Donnell (1922-2007).

At the end of last year, Pope Francis captioned it “the fruit of war” and had copies of it distributed with this inscription: “The young boy’s sadness is expressed in his gesture of biting his lips, which are oozing blood.”

The Holy Father’s act expressed his commitment to the elimination of nuclear weapons.

Kimiko Sakai, 57, O’Donnell’s widow, noted: “This is a precious photo taken by my late husband. He used to wonder about the boy’s whereabouts (after the war) and what he would say to him if they could meet again.” She is a Fukushima native residing in the United States.

O’Donnell visited Hiroshima and Nagasaki with a camera in his hand in the immediate aftermath of the atomic bombings in August 1945.

He worked at the White House after the war. As O’Donnell reached his 60s, he began speaking out against the inhumanity of nuclear weapons. He held exhibitions of his long-withheld photos of Hiroshima and Nagasaki, and also published them in book form.

It was his photo exhibition in Fukushima that brought him and Sakai together. They married in 1997.

According to Sakai, Americans in general used to react with cool disinterest to A-bomb photos, but the atmosphere has changed since the birth of the Trump administration last year.

People are now concerned that the new president may make some foolish decision, Sakai said, adding that she can actually feel society’s growing sense of anxiety.

Concerns are growing in Japan, too.

North Korean leader Kim Jong Un declared at the start of this year that “A nuclear button is always on the desk of my office.”

Trump reacted with a typical Twitter rant, boasting that his nuclear button “is a much bigger & more powerful one than his, and my Button works!”

The picture of the Nagasaki boy, biting his lips until they bled to fight back tears, ought to be hung on the office walls of these two leaders.

Vox Populi, Vox Dei is a popular daily column that takes up a wide range of topics, including culture, arts and social trends and developments. Written by veteran Asahi Shimbun writers, the column provides useful perspectives on and insights into contemporary Japan and its culture.