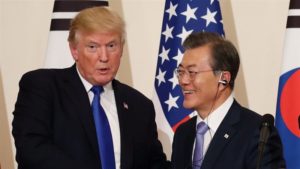 11 Jan 2018 – South Korean President Moon Jae-in held a very polished press conference on January 10. He confidently laid out his domestic and foreign policy priorities for some 30 minutes. That address was followed by an hour-long exchange with the flock of journalists in attendance.

Yet the ease with which the event unfolded belied the difficulty Moon had in addressing questions about what may be the most important challenge for his administration: North Korea’s fast-progressing weapons programme.

Just 10 days earlier, North Korean leader Kim Jong-un‘s made an important New Year’s speech. He reiterated his country’s nuclear capabilities: “our Republic has, at last, come to possess a powerful and reliable war deterrent, which no force and nothing can reverse.”

It was in that same speech that Kim hinted at the possibility of a return to peaceful engagement, floating possible North Korean participation in the Pyeongchang Olympics, to be held in South Korea next month. Seoul eagerly seized the olive branch and countered with an offer of dialogue the very next day. And on Tuesday, January 9, the two sides finally met for the first time in more than two years and agreed that the North would indeed send a delegation to attend the games.

Fortunately, it just might be enough to ease tensions and prevent war in the immediate future, Washington’s wishes notwithstanding.

North Korea is known never to yield to force; historically, only sustained diplomacy has brought the regime to the table for dialogue.

Defying sanctions after sanctions, North Korea has made major progress toward becoming a nuclear power. In summer 2017, tensions flared up as Pyongyang and Washington traded barbed words. North Korea threatened to attack the US territory of Guam, and US President Trump promised “fire and fury” should Pyongyang issue any more threats against his country. Washington increased pressure on the North with military exercises and condemnations at the United Nations, and there were reports of some South Koreans preparing for war by buying up emergency supplies and gas masks. Pyongyang even tested in November what most experts believe is an intercontinental ballistic missile (ICBM) capable of reaching continental US – a prospect many had feared.

Things have calmed down considerably since then, but the North still expresses no interest in giving up its nuclear weapons, and talks of a preemptive attack by the US are growing. Even the latest strict sanctions imposed by the UN Security Council on December 22 – banning the export of nearly 90 percent of refined petroleum products to the North – doesn’t seem to be changing anything, as reports emerged that the Chinese were supplying North Korea with oil via ship-to-ship transfers.

Trump, in his usual self-aggrandising fashion, claimed credit for the current inter-Korean dialogue, tweeting on January 4, “does anyone really believe that talks and dialogue would be going on between North and South Korea right now if I wasn’t firm, strong and willing to commit our total ‘might’ against the North.” But the fact is that Washington knows its hardline policy of sanctions and threats has failed. And that is why it is surreptitiously contemplating a so-called “bloody nose” strategy of targeted attacks against North Korea – if a report in the Wall Street Journal is accurate – at the risk of causing a full-blown war on the peninsula.

At a conference on international security last month in the US, I was privately told by a number of US experts with links to Washington that the Trump administration is determined to attack North Korea. The question was of when, not if. Those views have been echoed in US media, which have taken to predicting the likelihood of war in terms of percentage.

Moon’s chief task as South Korean president is to make sure “there is never again a war on the Korean Peninsula,” as he emphasised on Wednesday. He cannot completely alienate the US, South Korea’s most important military ally. That is why Moon went so far as to thank Trump by saying, “I think President Trump deserves big credit for bringing about the inter-Korean talks”.

He also cannot completely kowtow to warmongers in Washington and push only for sanctions, or worse, endorse an attack. Moon has always maintained that sanctions are not for the sake of sanctions but a means to bring North Korea to join peaceful negotiation.

It was Moon who extended a dozen public invitations to Pyongyang to participate in the Pyeongchang Olympics, including in his speech at the UN General Assembly in September. And Kim Jong-un has responded to this overture.

North Korea is known never to yield to force; historically, only sustained diplomacy has brought the regime to the table for dialogue, as was the case in the 2000s when the Six-Party Talks took place and Pyongyang came very close to giving up its nuclear programme in exchange for concessions. That was until the Bush administration sabotaged the process by suddenly imposing sanctions against a Macau-based bank suspected of helping North Korea with money-laundering.

It would be naive to suggest that North Korea is suddenly entering talks simply out of genuine interest in peace. By agreeing to attend a high-profile international sporting event, Pyongyang has made it that much more difficult for Washington to opt for a military manoeuvre.

The regime traditionally extracts financial concessions from the South each time it performs a gesture aimed at engagement, and Pyongyang might just get the same this time around, too. Seoul wants to hold a reunion for divided families next month, and payment in the form of humanitarian aid to the North is not off the table.

While Trump reportedly responded positively to inter-Korean dialogue and said he would send his own family members to the Pyeongchang Olympics, war is a possibility that Washington hasn’t ruled out completely. And it is up to Moon to manage both North Korea, a belligerent neighbour, and the US, an ally that seems increasingly bent on a fight, in order to protect his own people. To that end, the resumption of dialogue can only be a good thing.

UpFront – North Korea: Are we on the brink of war?

Se-Woong Koo is co-founder and publisher of Korea Expose, an online magazine.