Hiding Evidence of Massacre in Rakhine

The World Must Act without Delay 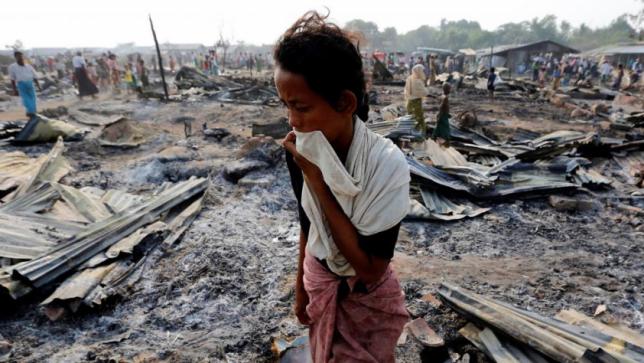 A woman walks among debris after fire destroyed shelters at a camp for internally displaced Rohingya Muslims in the western Rakhine State near Sittwe, Myanmar. Photo: REUTERS

23 Feb 2018 – The report that Myanmar is ‘bulldozing’ Rohingya mass grave to hide evidence of killing comes as no surprise to us.  It is only natural the perpetrators of genocide will try to cover up following the exposés that appeared in the media.

Myanmar government has gone to great lengths to conceal the army’s abominable history of atrocities—including mass killings, rape, torture and arson—in Rakhine State. From the very beginning, Myanmar’s authorities have restricted access of media and human rights organizations’ representatives to the conflict-ridden Rakhine State. The government barred the UN special envoy, Yanghee Lee, from visiting the country and spied on her. Then, two journalists, who were working on a very important story of the killing of ten Rohingyas by security forces, were arrested on espionage charges. Even Myanmar is hesitant to allow the United Nations Security Council to visit the affected area. It is now clear why.

These are not all. In fact, the reports that the refugee influx into Bangladesh still continues suggest that the authorities in Myanmar are still conducting its brutal anti-Rohingya campaign.

What more is needed to convince the international community that Myanmar’s words cannot be taken for granted?  The UN must act immediately.  More than a hundred British lawmakers have called for an International Criminal Court (ICC) referral for Myanmar’s military general Min Aung Hlaing over the security operations. They have rightly observed that Aung Hlaing’s sense of impunity appears to be emboldening him. We hope the British government would take heed of what the MPs have to say and ensure European Union supports the referral. And, the world should unanimously back attempts to bring the perpetrators of Rohingya genocide to book.