8 Feb 2018 – Bound together, the 10 Rohingya captives watched their Buddhist neighbors dig a grave. Soon afterwards, on the morning of Sept. 2, all 10 lay dead. At least two were hacked to death by Buddhist villagers. The rest were shot by soldiers, two of the gravediggers said.

The killings marked another episode in the violence sweeping Myanmar’s northern Rakhine State. The Rohingya accuse the army of arson, rapes and killings. The United Nations has said the army may have committed genocide. Myanmar says its “clearance operation” is a legitimate response to attacks by insurgents. 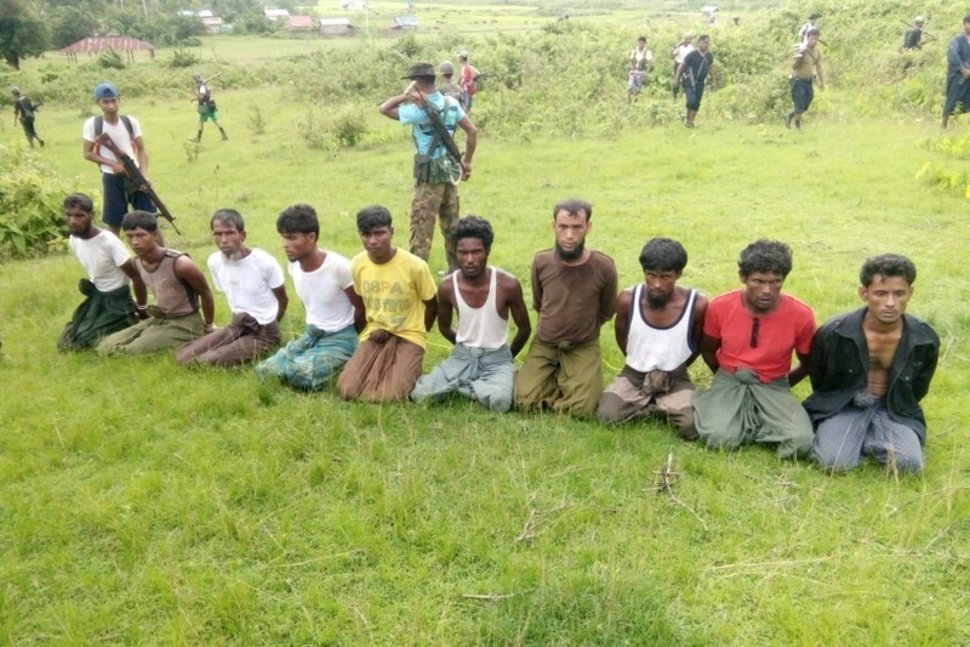 Rohingya trace their presence in Rakhine back centuries. But most people in majority-Buddhist Myanmar consider them to be unwanted Muslim immigrants from Bangladesh. The army refers to the Rohingya as “Bengalis,” and most lack citizenship. In recent years, the government has confined more than 100,000 Rohingya in camps where they have limited access to food, medicine and education. Nearly 690,000 Rohingya have fled their villages and crossed the border into Bangladesh since August.

Reuters has pieced together what happened in the days leading up to the killings in Inn Din, drawing for the first time on interviews with Buddhist villagers who confessed to torching Rohingya homes, burying bodies and killing Muslims.

This account also marks the first time soldiers and paramilitary police have been implicated by testimony from security personnel. Three photographs, provided to Reuters by a Buddhist village elder, capture key moments, from the Rohingya men’s detention by soldiers in the early evening of Sept. 1 to their execution shortly after 10 a.m. on Sept. 2.

The Reuters investigation was what prompted police authorities to arrest two of the news agency’s reporters, Wa Lone and Kyaw Soe Oo, on Dec. 12 for allegedly obtaining confidential documents relating to Rakhine. Then, on Jan. 10, the military issued a statement that confirmed portions of what Reuters was preparing to report, acknowledging that 10 Rohingya men were massacred in Inn Din.

But the military’s version of events is contradicted in important respects by accounts given to Reuters by Rakhine Buddhist and Rohingya Muslim witnesses.

The military said the 10 men belonged to a group of “200 terrorists” that attacked security forces. But Buddhist villagers interviewed for this article reported no attack by a large number of insurgents on security forces in Inn Din. And Rohingya witnesses told Reuters that soldiers plucked the 10 from among Rohingya who had sought safety on a nearby beach.

– An order to “clear” Inn Din’s Rohingya hamlets was passed down the command chain from the military, said three paramilitary police officers and a fourth police officer at an intelligence unit in the regional capital Sittwe.

Asked about the evidence Reuters has uncovered about the massacre, government spokesman Zaw Htay said, “We are not denying the allegations about violations of human rights. And we are not giving blanket denials.” If there was “strong and reliable primary evidence” of abuses, the government would investigate, he said. “And then if we found the evidence is true and the violations are there, we will take the necessary action according to our existing law.”

He expressed surprise when told that Buddhist villagers had confessed to burning Rohingya homes, then added, “We recognize that many, many different allegations are there, but we need to verify who did it. It is very difficult in the current situation.”

Zaw Htay defended the military operation in Rakhine. “The international community needs to understand who did the first terrorist attacks. If that kind of terrorist attack took place in European countries, in the United States, in London, New York, Washington, what would the media say?”

Events began to unfold on Aug. 25 when Rohingya rebels attacked police posts and an army base in northern Rakhine. Fearing for their safety, several hundred of Inn Din’s Buddhist villagers took refuge in a monastery. On Aug. 27, about 80 troops from Myanmar’s 33rd Light Infantry Division arrived in the village.

Five Buddhist villagers said the army officer in charge told them they could volunteer to join security operations. He found willing participants among Inn Din’s Buddhist “security group,” members of the organization and villagers said.

In the days that followed, soldiers, police and Buddhist villagers burned most of the homes of Inn Din’s Rohingya Muslims, a dozen Buddhist residents said.

One of the police officers said he received verbal orders from his commander to “go and clear” areas where Rohingya lived, which he took to mean to burn them. A second police officer described taking part in several raids on villages north of Inn Din. Security forces wore civilian shirts and shorts to blend in with the villagers, according to the second police officer and Inn Din’s Buddhist administrator, Maung Thein Chay.

After the Rohingya had fled Inn Din, Buddhist villagers took their property, including chickens and goats, Buddhist residents told Reuters. But the most valuable goods, mostly motorcycles and cattle, were collected by the commander of the 8th Security Police Battalion and sold, said the first police officer and the village administrator.

Reached by phone, the commander, Thant Zin Oo, did not comment. A police spokesman, Colonel Myo Thu Soe, said the police would investigate the allegations of looting.

By Sept. 1, several hundred Rohingya from Inn Din were sheltering on a nearby beach, witnesses said. Among them were the 10 men who would be killed. Five of the men were fishermen or fish sellers, two ran stores, two were students and one was an Islamic teacher.

Rohingya witnesses said the Islamic teacher, Abdul Malik, had gone back to his hamlet to collect food and bamboo for shelter. When he returned to the beach, at least seven soldiers and armed Buddhist villagers followed him. Then the military beckoned to the Rohingya, these witnesses said, and picked out the 10 men.

A photograph, taken that evening, shows the 10 kneeling on a path in the village. On Sept. 2, they were taken to scrubland near a graveyard, Buddhist villagers said, where they were photographed again. Security personnel questioned them about the disappearance of a local Buddhist farmer named Maung Ni, according to a Rakhine elder. Several Rakhine Buddhist and Rohingya villagers told Reuters they knew of no evidence connecting any of the 10 to the farmer’s disappearance.

Three Buddhist witnesses said they watched as the captives were led by soldiers toward the site of their deaths. One of the gravediggers, retired soldier Soe Chay, said Maung Ni’s sons were invited by the army officer in charge of the squad to strike the first blows. The first son beheaded the Islamic teacher, Abdul Malik, according to Soe Chay. The second son hacked another of the men in the neck.

A Rakhine elder provided Reuters reporters with a photograph which shows the aftermath of the killings. Explaining why he chose to share information with Reuters, he said: “I want to be transparent on this case. I don’t want it to happen like that in future.”