Scholars, Activists and Politicians in Germany to Hold an International Conference on Myanmar Genocide at the Jewish Museum in Berlin

Urge EU & the World to Make “Never Again!” a Reality 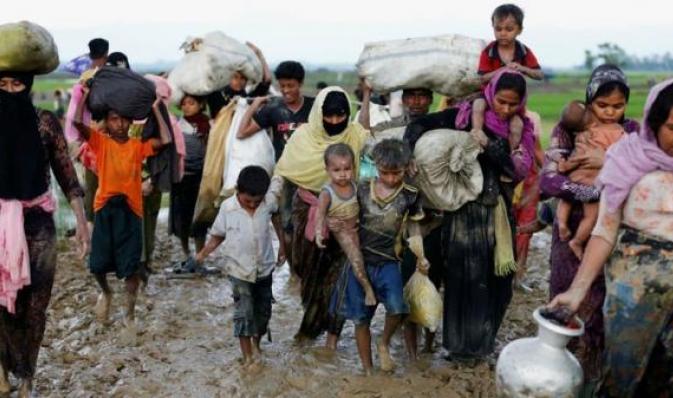 20 Feb 2018 – On 26 February, a group of prominent human rights activists, genocide scholars and practitioners of international law are gathering at the Jewish Museum of Berlin for the first-ever conference in Germany on Myanmar Genocide of the Rohingya people.

The host and convenor Dr. Maria do Mar Castro Varela, Professor of Pedagogy and Social Work at Berlin’s Alice Salomon University, said, “the conference aims to inform German civil society and the European public about the on-going genocide of Rohingya people in Myanmar/Burma. We hope to be able to help influence public opinion, which in turn will demand that the EU leaders take their shared political and human responsibility to make the call: “Never again!” a reality.”

The French President Emmanuel Macron has called Myanmar’s persecution of Rohingya a genocide. The conference coincides with the 26 February meeting of EU Foreign Ministers who will review the present EU policy towards Myanmar.

Margarete Bause, MP for Alliance 90/The Greens and Full Member of the Bundestag Commission on Human Rights and Humanitarian Aid, states, “crimes against humanity are being committed at this moment in Myanmar. Innocent children, women, and men alike are murdered in large numbers. The world needs to be informed about the extent of this ongoing horror and these grave violations of human rights, which constitute genocide. World governments – including the German government – must act immediately to protect the Rohingya. I therefore expressly welcome and support the conference being organized by Professor Castro Varela and ensure that we will put the subject on the German Bundestag agenda. We demand the immediate halt to the crimes against the Rohingya people.”

The Event brite announcement (https://www.eventbrite.de/e/berlin-conference-on-myanmar-genocide-regist…) reads, “the conference rejects the view that only a UN-authorized tribunal can decide whose collective sufferings and which acts of violence and destruction amount to genocide. Five independent academic and legal studies of Myanmar’s persecution and plight of the Rohingya ‑ including the Permanent Peoples Tribunal on Myanmar, the United States Holocaust Memorial Museum, Allard K. Lowenstein International Human Rights Clinic at Yale Law School, the International State Crime Initiative of Queen Mary University of London” and the Pacific Rim Law and Policy Journal of the University of Washington School of Law ‑ have arrived at a single common conclusion, that there is mounting evidence of a genocide against the Rohingya.”

Ro Nay San Lwin, a renowned Rohingya blogger and researcher who resettled in Germany as a refugee, said he is pleased that German scholars and politicians are taking up the cause of the Rohingya people who make up the world’s largest population of “stateless people”. “I think holding this international conference to inform German and EU public and politicians here in Germany is extremely timely and crucial. On behalf of all the Rohingya survivors and refugees who have suffered decades of Myanmar’s slow burning genocide, I thank from the bottom of my heart the Jewish Museum for allowing this conference to take place at its prestigious and morally important venue.”

In addition, well-known human rights activists in the Burmese diaspora will join a group of prominent Rohingya refugees and activists in the latter’s call for “a piece of earth which Rohingyas can call their home”, a UN-protected, self-administered region for the Rohingya people on their ancestral land next to Bangladesh.

The conference will end with a quiet procession from Brandenburg Gate to the Memorial to the Murdered Jews of Europe where activists against genocides – including Bosnians, Tamils, Bangladeshi, Jewish, Germans, British, Burmese, Palestinians, and Canadians – will hold a candle light vigil in memory of all victims of genocides, past and present.