25 Jan 2018 – South Korea’s foreign minister said today the standoff over North Korea’s nuclear program must be resolved diplomatically, and she was certain Washington would consult her government first if a military option were to be considered. 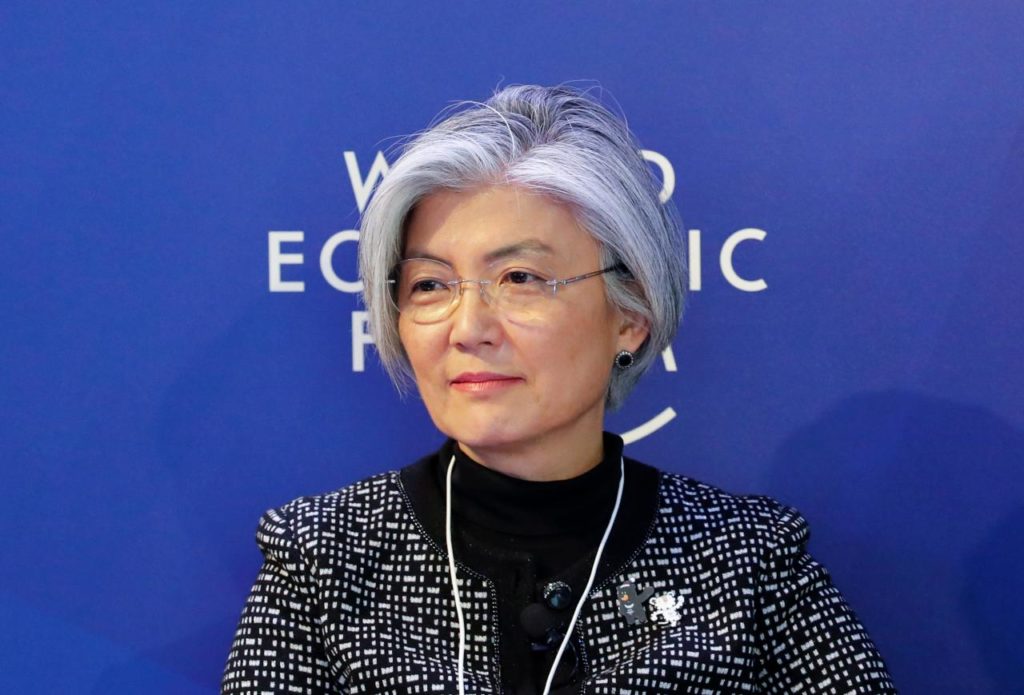 “The nuclear issue has to be solved through negotiations and diplomatic endeavors. This idea of a military solution is unacceptable,” Kang Kyung-wha said at a news briefing on the sidelines of the World Economic Forum in Davos, Switzerland.

The Trump administration has said all options are on the table in dealing with North Korea, and officials say the president and his advisers have discussed the possibility of a limited strike. But debate on military options has lost some momentum in recent weeks after North and South Korea resumed talks ahead of next month’s Winter Olympics in the South.

“I‘m assured that anything the U.S. administration does on this front is done in close consultation with us,” Kang said.

She declined to comment if Washington had given Seoul clear assurance but added: “This is our fate that is at stake. Any option that is to be taken on the Korean peninsula, cannot be implemented without us going along.”

In an earlier interview with Reuters, Kang said South Korea was prepared for “all contingency scenarios” in case North Korea stages another weapons test, even as the two countries conduct talks and mutual visits relating to the Olympics.

“We go into these discussions with a clear understanding of what might be possible,” Kang said, adding, “another provocation is always a possibility.”

Kang, who was in Davos to discuss recent progress in inter-Korean talks and to boost awareness of the Olympics, did not discuss details of the scenarios that South Korea was prepared for.

After their first formal talks in more than two years this month, officials from the two Koreas have been visiting each other to facilitate the North’s participation in the Olympics, to be held in the South’s alpine resort town of Pyeongchang.

North Korea has waged a publicity campaign around its attendance, calling on Thursday for “all Koreans at home and abroad” to promote inter-Korean cooperation.

Kim Jong Un’s regime has also set a new anniversary to mark the formation of its military on Feb. 8 – the day before the start of the Games – and analysts say the nation may observe the day with a large military parade.

U.S. Vice President Mike Pence, who will represent the United States at the Olympics, said on Tuesday he would seek to counter what he described as an effort by North Korea to “hijack” the Games with a propaganda campaign.

Seoul has rejected that criticism, saying the Olympics will help defuse tensions over Pyongyang’s nuclear and missile programs.

“This is an opportunity for engagement and a peaceful engagement around the Olympic Games, and we just need to make the best of it,” Kang said in the interview on Wednesday.

But she cautioned that sustained improvement in bilateral ties cannot take place apart from the nuclear issue: “There have to be advances on this front as well.”

Last year, North Korea conducted dozens of missile launches and its sixth and largest nuclear test, in defiance of U.N. Security Council resolutions, as it raced towards its goal of developing a nuclear-armed missile capable of reaching the United States.

Another test or similar provocation “would be not acceptable,” Kang said. “And further provocations will only lead to further pressure and sanctions”.

Kang said she was “very disappointed” with the U.S. government’s decision this week to impose steep tariffs on washing machines imported from South Korea, but said that the trade dispute should not affect a “very strong security alliance” between the two countries.

But analysts say turning the thaw into a longer-term detente will be far more daunting, as the North rejected discussing its nuclear weapons program with the South in earlier talks.

“The period of non-engagement with North Korea has been too long,” Kang said, hoping that discussions “will create the momentum for dialogue on the North Korean nuclear issue as well.”

In an apparent bid to court the North, which describes joint South Korea-U.S. military exercises as a “rehearsal for war,” Seoul had proposed a delay in the drills during the Olympics.

The proposal was based on the “spirit of the Olympic Games,” Kang said, but declined to elaborate on whether the South would resume the drills after the event.

“We’re on the same page on all fronts (with the United States),” she said. “So we will see how the next two months will unfold.”

China and Russia can “do more” to improve the enforcement of the U.N. Security Council (UNSC) sanctions against North Korea in areas such as the interdiction of ships suspected of conducting illegal transfers of oil and coal at sea, she said.

“This is now mandatory by the latest UNSC resolution, if you have information that illicit transfers are being done ship-to-ship, that’s a clear violation and you have to stop that,” Kang said.

“China and Russia are members of the Security Council – they have in fact the primary responsibility to see their decisions on the sanctions are implemented.”

Reporting by Soyoung Kim in DAVOS, Switzerland, Writing by Hyonhee Shin in SEOUL; Editing by Lincoln Feast and Bernadette Baum