The Deadly Rule of the Oligarchs 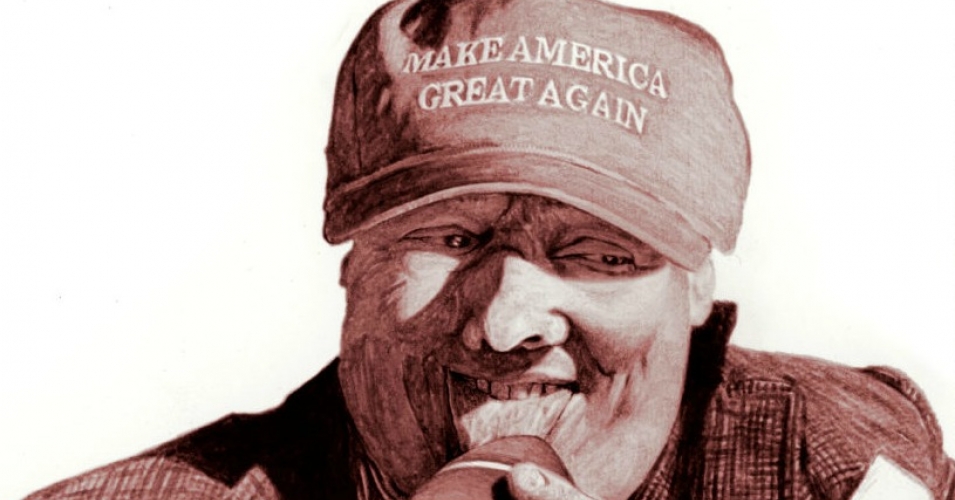 “Oligarchs, though they speak of deconstructing the administrative state, actually increase deficits and the size and power of law enforcement and the military to protect their global business interests and ensure domestic social control.” (Photo: Mr. Fish/Truthdig)

11 Feb 2018 – Oligarchic rule, as Aristotle pointed out, is a deviant form of government. Oligarchs care nothing for competency, intelligence, honesty, rationality, self-sacrifice or the common good. They pervert, deform and dismantle systems of power to serve their immediate interests, squandering the future for short-term personal gain. “The true forms of government, therefore, are those in which the one, or the few, or the many, govern with a view to the common interest; but governments that rule with a view to the private interest, whether of the one, of the few or of the many, are perversions,” Aristotle wrote. The classicist Peter L.P. Simpson calls these perversions the “sophistry of oligarchs,” meaning that once oligarchs take power, rational, prudent and thoughtful responses to social, economic and political problems are ignored to feed insatiable greed. The late stage of every civilization is characterized by the sophistry of oligarchs, who ravage the decaying carcass of the state.

These deviant forms of government are defined by common characteristics, most of which Aristotle understood. Oligarchs use power and ruling structures solely for personal advancement.

Oligarchs, though they speak of deconstructing the administrative state, actually increase deficits and the size and power of law enforcement and the military to protect their global business interests and ensure domestic social control. The parts of the state that serve the common good wither in the name of deregulation and austerity. The parts that promote the oligarchs’ power expand in the name of national security, economic growth and law and order.

For example, the oligarchs educate their children in private schools and buy them admissions into elite universities (this is how a mediocre student like Jared Kushner went to Harvard and Donald Trump went to the University of Pennsylvania), so they see no need to fund good public education for the wider population. Oligarchs can pay teams of high-priced lawyers to bail them and their families out of legal trouble. There is no need, in their eyes, to provide funds for legal representation for the poor. When oligarchs do not fly on private jets, they fly in first class, so they permit airlines to fleece and abuse “economy” passengers. They do not use subways, buses or trains, and they slash funds for the maintenance and improvement of these services. Oligarchs have private clinics and private doctors, so they do not want to pay for public health or Medicare. Oligarchs detest the press, which when it works shines a light on their corruption and mendacity, so they buy up and control systems of information and push their critics to the margins of society, something they will accelerate with the abolition of net neutrality.

Oligarchs do not vacation on public beaches or in public parks. They own their own land and estates, where we are not allowed. They see no reason to maintain or fund public parks or protect public land. They hand such land over to other oligarchs to exploit for profit. Oligarchs cynically view laws as mechanisms to legalize their fraud and plunder. They use their lobbyists in the legislative branch of government to author bills that increase and protect their wealth, through the avoidance of taxes and other means. Oligarchs do not allow free and fair elections. They use gerrymandering and campaign contributions to make sure other oligarchs are elected over and over to office. Many run unopposed.

Oligarchs look at regulations to protect the environment or the safety of workers as impediments to profit and abolish them. Oligarchs move industries to Mexico or China to increase their wealth while impoverishing American workers and leaving U.S. cities in ruins. Oligarchs are philistines. They are deaf, dumb and blind to great works of art, reveling in tawdry spectacles, patriotic kitsch and mindless entertainment. They despise artists and intellectuals who promote virtues and self-criticism that conflict with the lust for power, celebrity and wealth. Oligarchs always unleash wars on culture, attacking it as elitist, irrelevant and immoral and cutting its funding. All social services and institutions, such as public housing programs, public parks, meals for the elderly, infrastructure projects, welfare and Social Security, are viewed by oligarchs as a waste of money. These services are gutted or turned over to fellow oligarchs, who harvest them for profit until they are destroyed.

Oligarchs, who do not serve in the military and who ensure their children do not serve in the military, pretend to be great patriots. They attack those who oppose them as anti-American, traitors or agents for a foreign power. They use the language of patriotism to stoke hatred against their critics and to justify their crimes. They see the world in black and white—those who are loyal to them and those who are the enemy. They extent this stunted belief system to foreign affairs. Diplomacy is abandoned for the crude threats and indiscriminate use of force that are the preferred forms of communication of all despots.

There is little dispute that we live in an oligarchic state. The wealthiest 1 percent of America’s families control 40 percent of the nation’s wealth, a statistic similar to what is seen globally: The wealthiest 1 percent of the world’s population owns more than half of the world’s wealth. This wealth translates into political power. The political scientists Martin Gilens of Princeton and Benjamin Page of Northwestern, after examining differences in public opinion across income groups on a wide variety of issues, concluded, “In the United States, our findings indicate, the majority does not rule—at least not in the causal sense of actually determining policy outcomes. When a majority of citizens disagrees with economic elites and/or with organized interests, they generally lose. Moreover … even when fairly large majorities of Americans favor policy change, they generally do not get it.”

Oligarchs accelerate social, political, cultural and economic collapse. The unchecked plunder leads to systems breakdown. The refusal to protect natural resources, or the economic engines that sustain the state, means that poverty becomes the norm and the natural world becomes a toxic wasteland. Basic institutions no longer work. Infrastructure is no longer reliable. Water, air and soil are poisoned. The population is left uneducated, untrained, impoverished, oppressed by organs of internal security and beset by despair. The state eventually goes bankrupt. Oligarchs respond to this steady deterioration by forcing workers to do more for less and launching self-destructive wars in the vain attempt to restore a lost golden age. They also insist, no matter how bad it gets, on maintaining their opulent and hedonistic lifestyles. They further tax the resources of the state, the ecosystem and the population with suicidal demands. They flee from the looming chaos into their gated compounds, modern versions of Versailles or the Forbidden City. They lose touch with reality. In the end, they are overthrown or destroy the state itself. There is no institution left in America that can be called democratic, and thus there is no internal mechanism to prevent a descent into barbarity.

“The political role of corporate power, the corruption of the political and representative processes by the lobbying industry, the expansion of executive power at the expense of constitutional limitations, and the degradation of political dialogue promoted by the media are the basics of the system, not excrescences upon it,” the political philosopher Sheldon Wolin wrote in “Democracy Incorporated: Managed Democracy and the Specter of Inverted Totalitarianism.” “The system would remain in place even if the Democratic Party attained a majority; and should that circumstance arise, the system will set tight limits to unwelcome changes, as if foreshadowed in the timidity of the current Democratic proposals for reform. In the last analysis, the much-lauded stability and conservatism of the American system owe nothing to lofty ideals, and everything to the irrefutable fact that it is shot through with corruption and awash in contributions primarily from wealthy and corporate donors. When a minimum of a million dollars is required of House candidates and elected judges, and when patriotism is for the draft-free to extol and for the ordinary citizen to serve, in such times it is a simple act of bad faith to claim that politics-as-we-now-know-it can miraculously cure the evils which are essential to its very existence.”

The longer we are ruled by oligarchs, the deadlier our predicament becomes, especially since the oligarchs refuse to address climate change, the greatest existential crisis to humankind. The oligarchs have many mechanisms, including wholesale surveillance, to keep us in check. They will stop at nothing to maintain the sophistry of their rule. History may not repeat itself, but it echoes. And if we don’t recognize these echoes and then revolt, we will be herded into the abattoirs that tyrannies set up at the end of their existence.