The New Cold War Is Happening in Africa 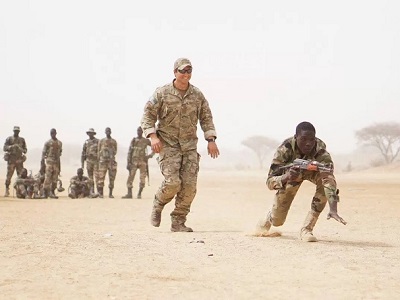 31 Jan 2018 – There is a new Cold War that is brewing and the African continent is slated to be its epic center. With China’s impressive rise as an economic superpower and Russia’s re-emergence as a strong military contender, the United States government is giving more attention on Africa.

This fact has been confirmed once more by a just-released US National Defense Strategy, which makes for a worrying read. As Robert Borosage, Andrew Backevich and others opined, the document offers no strategy but rather rehashed pretenses to expand US military outreach in the name of fighting terrorism. It is thus a recipe for perpetual war.

The so-called ‘war on terror’ has been in the making for 17 years, and has only exacerbated matters. It, often inadvertently gave rise to new militant groups, resurrected old ones, and turned terrorism into a global phenomenon that grew hand-in-hand with US military expansion.

“Only after being targeted by the US military did local insurgencies like Al Shabaab in Somalia and al-Qaeda in the Islamic Maghreb expand into serious regional terrorist operations,” wrote Catherine Besteman and Stephanie Savell. They were commenting on a new map recently published by the Costs of War Project at Brown’s University’s Watson Institute for International and Public Affairs.

According to the map, the US’s lethal war has been waged in 76 countries – around 40 percent of all countries on earth. This war has also killed millions of innocent civilians since 2001.

The NDS’s new document promises more of the same, with language reminiscent of the destructive political discourse espoused by the now defunct Project for the New American Century. This neoconservative organization’s strategy aimed at reclaiming American leadership around the world, resulting in the Iraq wars, among other global conflicts.

The Pentagon’s most recent plan also calls for greater US military intervention, not only to fight ‘terrorism’ but also to push back against China and Russia, described in the report as “revisionist powers” that are threatening the world.

China and Russia “want to shape a world consistent with their authoritarian model – gaining veto authority over other nations,” the report claims.

In fact, the ongoing fight between superpowers is the real motive behind the US strategy which uses terrorism as a pretense to subvert international law and interferes as it pleases in world affairs.

According to the new ‘strategy’, US relations with Africa will not be predicated on the respect of the sovereignty or the rights of African nations. Instead, it purports to “address significant terrorist’s threats that imperil US interests and contribute to challenges in Europe and the Middle East.”

The terminology the US uses to describe its relationship with Africa is disturbing in that it cements the view of the continent as a breeding ground for violence, crime, human trafficking and terrorism.

The mischaracterizations of and generalizations about Africa are not entirely random, being essential to justify and explain western violence meted out to the continent over centuries. The US perception of Africa is no exception.

More recently, the US has positioned itself as the savior and defender of Africa to the point that even liberal US media often reproach the government for ‘not doing enough’ in terms of getting more involved in the continent.

Writing in Salon.com under the title “Is War about to Break out in the Horn of Africa? Will the West even Notice?” Steven A. Cook called for “American mediation”, blaming US President Donald Trump’s administration for not making the Horn of Africa a top foreign policy priority, thus leaving Vladimir Putin’s Russia to fill the gap.

But a bird’s-eye view of US interventions in Africa would illuminate two facts: the US is already too involved in Africa, and US involvement often stirs up, rather than mediates the end of conflicts.

Indeed, there is a real – but largely concealed – war taking place throughout the African continent, involving the US, an invigorated Russia and a rising China. The outcome of the war is likely to define the future of the continent as well as its global outlook.

The problem predates the Trump Presidency by nearly a decade.

In 2007, under the pretext of the ‘war on terror’, the US consolidated its various military operations in Africa to establish the United States Africa Command (AFRICOM). With a starting budget of half a billion dollars, AFRICOM was supposedly launched to engage with African countries in terms of diplomacy and aid. However, over the last 10 years, AFRICOM has been transformed into a central command for military incursions and interventions.

This violent role has rapidly worsened during the first year of Trump’s term in office. Indeed, there is a hidden US war in Africa, and it is fought in the name of ‘counter-terrorism’.

According to a VICE News special investigation, US troops are now conducting 3,500 exercises and military engagements throughout Africa per year, an average of 10 per day. US mainstream media rarely discusses this ongoing war, thus the military has ample space to destabilize any of the continent’s 54 countries at will.

“Today’s figure of 3,500 marks an astounding 1,900 percent increase since the command was activated less than a decade ago, and suggests a major expansion of US military activities on the African continent,” VICE reported.

Following the death of four US Special Forces soldiers in Niger on October 4, US Secretary of Defense, James Mattis, made an ominous declaration to a Senate committee: these numbers are likely to increase as the US is expanding its military activities in Africa.

Mattis, like other defense officials in the previous two administrations, justifies the US military transgressions as part of ongoing ‘counter-terrorism’ efforts. But such coded reference has served as a pretense for the US to intervene in, and exploit, a massive region with great economic potential.

The old colonial ‘Scramble for Africa’ is being reinvented by global powers that fully comprehend the extent of the untapped economic largesse of the continent.

While China, India and Russia are each developing a unique approach to wooing Africa, the US is invested mostly in the military option, promising to inflict untold harm and destabilize many nations. The 2012 coup in Mali, carried out by a US-trained army captain, Amadou Haya Sanogo, is only one such example.

In a 2013 speech, then US Secretary of State, Hillary Clinton, cautioned against a “new colonialism in Africa (in which it is) easy to come in, take out natural resources, pay off leaders and leave.” While Clinton is correct, she was disingenuously referring to China, not her own country.

China’s increasing influence in Africa is obvious, and Beijing’s practices can be unfair. However, China’s policy towards Africa is far more civil and trade-focused than the military-centered US approach.

The growth in the China-Africa trade figures is, as per a UN News report in 2013, happening at a truly “breathtaking pace”, as they jumped from around $10.5 billion per year in 2000 to $166 billion in 2011. Since then, it has continued at the same impressive pace.

It should come as no surprise then that China surpassed the US as Africa’s largest trading partner in 2009.

A bird’s-eye view of US interventions in Africa would illuminate two facts: the US is already too involved in… https://t.co/hl6A55fxhB

The real colonialism, which Clinton referred to in her speech, is, however, underway in the US’s own perception and behavior towards Africa. This statement echoes the words of US President Trump himself.

During a lunch with nine African leaders at the UN last September, Trump spoke with the kind of mindset that inspired western leaders’ colonial approach to Africa for centuries.

Soon after he invented the non-existent country of ‘Nambia’, Trump boasted of his “many friends (who are) going to your (African) countries trying to get rich.”

“I congratulate you,” he said, “they are spending a lot of money.”

The following month, Trump added Chad, his country’s devoted ‘counter-terrorism’ partner, to the list of countries whose citizens are banned from entering the US.

Keeping in mind that Africa has 22 Muslim majority countries, the US government is divesting from any long-term diplomatic vision in Africa and is instead, increasingly thrusting further into the military path.

The US military push does not seem to be part of a comprehensive policy approach either. It is as alarming as it is erratic, reflecting the US constant over-reliance on military solutions to all sorts of problems, including trade and political rivalries.

Compare this to Russia’s strategic approach to Africa. Reigniting old camaraderie with the continent, Russia is following China’s strategy of engagement (or in this case, re-engagement) through development and favorable trade terms.

But, unlike China, Russia has a wide-ranging agenda that includes arms exports, which are replacing US weaponry in various parts of the continent. For Moscow, Africa also has untapped and tremendous potential as a political partner that can bolster Russia’s standing at the UN.

Wary of Russia’s Africa outreach, the US is fighting back with a military stratagem and little diplomacy. The ongoing US mini wars on the continent will push the continent further into the abyss of violence and corruption, which may suit Washington well, but which will bring about untold misery to millions of people.