A single organization controls almost everything you see, hear, and read in the media and they’ve been handpicking your leaders for decades. 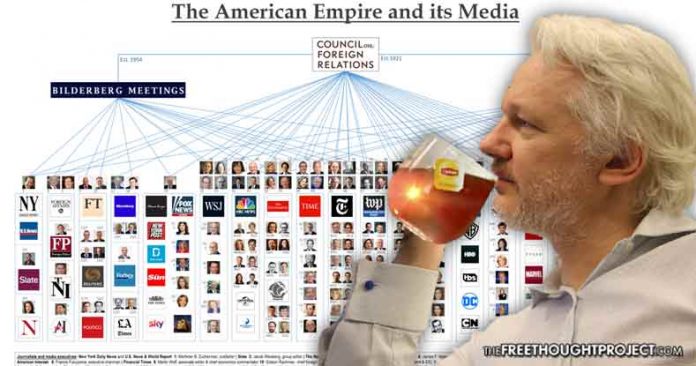 29 Jan 2018 – It is no secret that over the last 4 decades, mainstream media has been consolidated from dozens of competing companies to only six. Hundreds of channels, websites, news outlets, newspapers, and magazines, making up ninety percent of all media is controlled by very few people—giving Americans the illusion of choice.

While six companies controlling most everything the Western world consumes in regard to media may sound like a sinister arrangement, the Swiss Propaganda Research center (SPR) has just released information that is even worse.

The research group was able to tie all these media companies to a single organization—the Council on Foreign Relations (CFR).

For those who may be unaware, the CFR is a primary member of the circle of Washington think-tanks promoting endless war. As former Army Major Todd Pierce describes, this group acts as “primary provocateurs” using “‘psychological suggestiveness’ to create a false narrative of danger from some foreign entity with the objective being to create paranoia within the U.S. population that it is under imminent threat of attack or takeover.”

A senior member of the CFR and outspoken neocon warmonger, Robert Kagan has even publicly proclaimed that the US should create an empire.

The narrative created by CFR and its cohorts is picked up by their secondary communicators, also known the mainstream media, who push it on the populace with no analysis or questioning.

When looking at the chart from SPR, the reach by this single organization is so vast that it is no mystery as to how these elite psychopaths guide Americans into accepting endless war at the expense of their mothers, fathers, sons, and daughters.

Top journalists and executives from all major media companies are integrated into the CFR. As the chart below illustrates, the CFR has even more control in the mainstream media than even the nefarious Bilderberg Group and the Trilateral Commission. 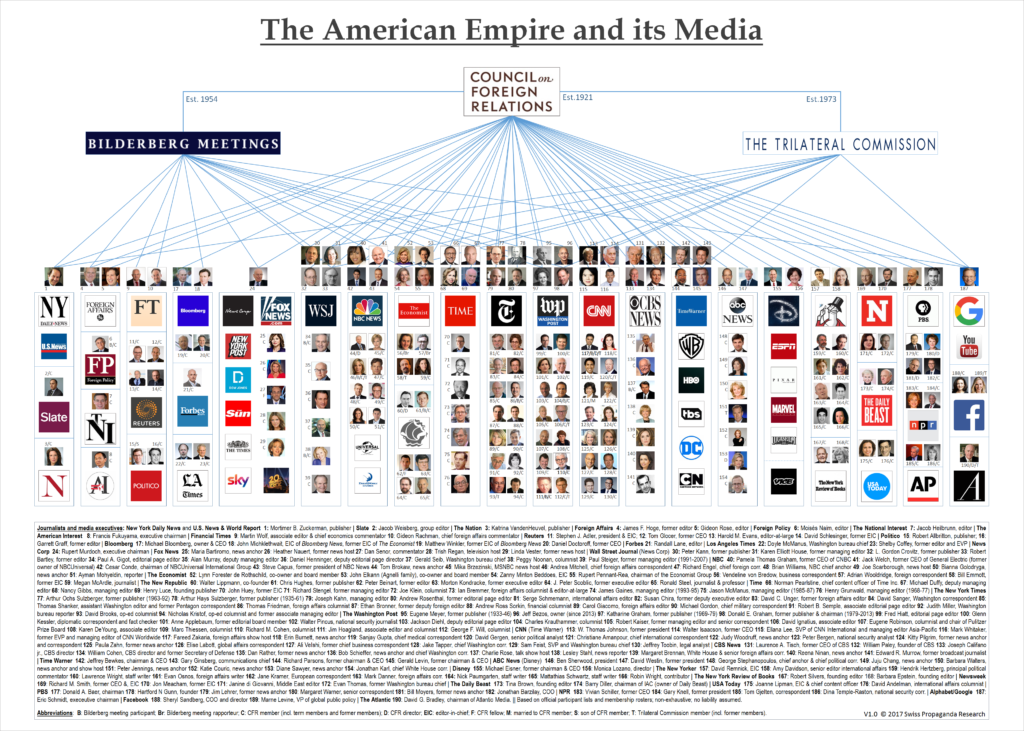 As SPR points out, Richard Harwood, former managing editor and ombudsman of the Washington Post, wrote about the Council on Foreign Relations Recognizing that its members most likely correspond to what one might call the “ruling establishment of the United States.”

Harwood continued, “The membership of these journalists in the council, however they may think of themselves, is an acknowledgment of their active and important role in public affairs and of their ascension into the American ruling class. They do not merely analyze and interpret foreign policy for the United States; they help make it.”

Let that sink in. This group of unaccountable, unelected, professional propagandists in America doesn’t simply analyze US government policy—they make it.

While only five percent of the members of CFR work within the media, as SPR points out that is all they need to implement the will of its other members that includes:

To highlight just how much control over the media the CFR wields we need only look at the fact that they operate—in the open—and receive nearly no media coverage. The former chairman of the CFR, High Commissioner for Germany, co-founder of the Atlantic Bridge, World Bank president, and an adviser to a total of nine US presidents, John J. McCloy actually bragged publicly about the CFR hand picking US politicians.

“Whenever we needed a man [in Washington], we just thumbed through the roll of Council members and put through a call to New York [to the CFR’s headquarters office],” said McCloy.

Although Donald Trump was never a public member of the CFR, that did not stop him from filling the White House with dozens of CFR members.

Here are just a few of the CFR members appointed by Trump:

Even though Trump wasn’t a CFR member outright, his cabinet is made up almost entirely of its members. As this information illustrates—democracy is an illusion. If ever you needed another reason to tune out of mainstream media and seek out information for yourself—this is it. It also explains why information like this, which challenges this worldview is under attack.

Please share this article with your friends and family to show them just how much of the information, political process, and their lives are controlled by a mere handful of people.

Board of Directors – Council on Foreign Relations: https://www.cfr.org/board-directors

Matt Agorist is an honorably discharged veteran of the USMC and former intelligence operator directly tasked by the NSA. This prior experience gives him unique insight into the world of government corruption and the American police state. Agorist has been an independent journalist for over a decade and has been featured on mainstream networks around the world. He is also the Editor at Large at the Free Thought Project.