With Nuclear Weapons, Evacuation Is Not an Option 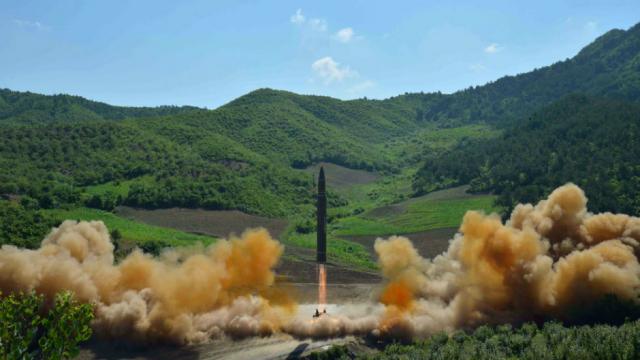 22 Jan 2018 – My wife and I and other members of our family have been living through the nightmarish disaster that struck our community of Montecito. First came the fire and then came the floods.

The fire, named the Thomas Fire, turned out to be the biggest in California history. At one point, it reached the top of the road where we live, and the firefighters, with some help from the shifting direction of the winds, were able to hold the line. The firefighters were heroic.

We were under mandatory evacuation from our home for 12 days, and then were evacuated from the place we were staying as the evacuation zone was expanded. The fire roared on in the backcountry, continuing to spew ash from the dry brush and trees it was consuming.

Throughout the area, people were wearing masks to keep from breathing in the ash. The sky was a sickening yellow-gray. It looked and felt like we were survivors of a nuclear attack. We were living with apprehension day to day, glued to the news, except when the electricity went out.

The fire was finally brought under greater control, and we were allowed to return to our homes. But a few weeks later, the expectation of heavy rains and possible flooding caused us to again be put under mandatory evacuation. We left our home again, thinking this would be a short and easy evacuation and we would soon be able to return. This was not the case.

The floods overwhelmed our community, causing treacherous debris flows, at least 21 deaths, and hundreds of destroyed homes. Our community looked like a war zone. Trees were uprooted and, along with huge boulders, had been swept down from the fire-denuded mountains and fallen upon our quiet community of Montecito. The rescue workers were again heroic.

Now we wait for the teams of utility workers to get the various utilities up and running. For the time being, electricity, gas and water are all turned off. The disaster of it all looms large in my mind. The results were not predictable. Lives and homes were lost in both the mandatory and voluntary evacuation zones. Death and destruction did not discriminate. Nature only did what nature does. It was mostly beyond our control.

I have thought so many times during this double disaster of the song lyrics, “there but for fortune go you or go I.” So many close calls for so many people. So many fateful decisions. For some, so much pain and grief, and for others so much relief.

While still evacuated and feeling the pain of our community’s disaster, news came that on Jan. 13 a worker at the Hawaii Emergency Management Agency accidentally released an Emergency Alert warning that a ballistic missile was inbound to the state and that the people should seek immediate shelter. The alert emphasized, “THIS IS NOT A DRILL.” It was all too believable.

People scurried to be with loved ones or to call them to tell them they loved them and to say goodbye. The threat seemed very real, but the solution offered by the authorities was ridiculous. Shelter does not protect against thermonuclear weapons.

Nothing protects against thermonuclear weapons: not shelter, not nuclear deterrence, not missile defenses.

Thirty-eight minutes later came the message that the warning had been a “false alarm.” This is yet another reminder that accidents happen and humans are fallible, even in the best designed systems.

In our community, we have been living through radical uncertainty from forces of nature. But we also live daily with the radical uncertainty of nuclear survival, which is not a force of nature, but rather a man-made threat. It is a threat entirely of our own making, and it can be remedied by facing it and doing something about it, namely convening the nuclear-armed countries to negotiate the phased, verifiable, irreversible and transparent elimination of these weapons. And, as a step prior to this, or simultaneously, to sign and ratify the Treaty on the Prohibition of Nuclear Weapons, which includes prohibitions on the development, deployment, use and threat of use of nuclear weapons.

Also, during the period of evacuation and devastation of our community, a copy of the newly drafted U.S. Nuclear Posture Review was leaked. The review calls for a “safe, secure and effective” nuclear deterrent force. But nuclear weapons are not safe or secure by their nature, and it doesn’t really matter how safe and secure the U.S. nuclear forces are, if another country’s nuclear arsenal is not.

The greatest issue, though, arises with “effective” nuclear deterrent force. This falls into the category of radical uncertainty. No one can claim a deterrent force is effective, because it is always subject to failure. If it were clearly effective, missile defenses would not be needed. Neither would civil defense drills and warnings.

In addition, the draft Nuclear Posture Review calls for modernizing the entire U.S. nuclear arsenal at great cost; for the development of new, smaller, more usable nuclear weapons; and for using nuclear weapons against a wide range of non-nuclear attacks against the U.S. and its allies. These steps will provoke other nuclear-armed countries, as well as potential proliferators, to follow our lead.

I would hate to see the catastrophe experienced by our community played out on a global nuclear battlefield, but that is the direction in which the world is heading. The time ending the nuclear weapons threat to humanity is now, before it is too late. The draft Nuclear Posture Review should be scrapped and replaced with the commitment to take nuclear weapons off high alert status; to implement pledges of No First Use; and to commit to negotiate to achieve the only number that makes sense in a nuclear context: Zero.

With nuclear weapons, evacuation is not an option.