U Wirathu / The Irrawaddy

9 March 2018 – U Wirathu, the firebrand nationalist monk who in 2017 was banned from preaching for one year, will be free to resume his sermons on Saturday [10 Mar].

The State Sangha Maha Nayaka Committee, the highest Buddhist authority of Myanmar, better known by its Burmese acronym Ma Ha Na, banned U Wirathu from preaching for one year on March 9, 2017, for spreading hate speech, which it said could lead to religious conflict.

“There is no new instruction from Ma Ha Na about U Wirathu,” U Tun Nyunt, director of the Religious Affairs Department, told The Irrawaddy.

Ma Ha Na’s annual meeting in February did not see any discussion related to U Wirathu, he added.

U Wirathu declined The Irrawaddy’s request for an interview about the expiry of the ban.

“I’ve boycotted both local and foreign media as I have no trust in them, so I have no comment,” he said.

The monk, who is notorious for his anti-Muslim rhetoric since communal violence broke out in Rakhine State in 2012, has made the cover of Time Magazine as the “Face of Buddhist Terror.” 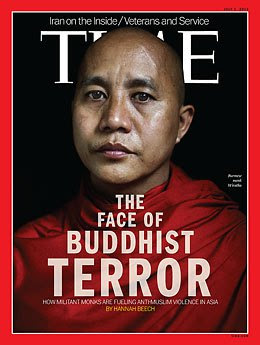 Despite the ban, U Wirathu has shared a number of videos on social media over the past year in which he claimed to be the mentor of Kyi Lin, the accused assassin of prominent Muslim lawyer U Ko Ni, and thanked the gunman and other alleged co-conspirators. In another video, he asked the National League for Democracy (NLD) government, which he has continuously accused of favoring Muslims over Buddhists, to step down.

In late February, AFP reported that Facebook had removed U Wirathu’s page because of his incendiary posts about Muslims as it faces pressure to clamp down on hate speech.

But his videos have continued to spread on Facebook. In a Feb. 7 video he criticized the government and the lawyer prosecuting Kyi Lin, telling them to “Eat Well.”

The phrase in Burmese is used as a threat to show one’s anger and to warn of impending revenge.

His open support for Kyi Lin has drawn strong criticism from both monks and laypeople, with some monks calling for legal action against him.

During Ma Ha Na’s annual meeting in late February, Union Minister for Religious Affairs and Culture Thura U Aung Ko urged the committee to take action against monks who disgrace Buddhism through their activities or speech.

The minister said a lack of consensus in society about the proper political role for Buddhist monks had made it difficult for the government to take action against rowdy monks even as some of them were becoming increasingly reckless.

Htun Htun is reporter at the Burmese edition of The Irrawaddy.