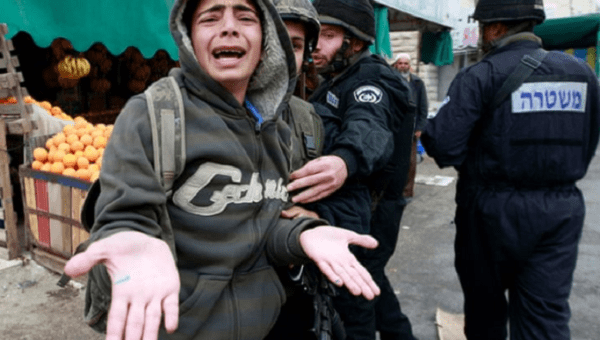 Israel has detained, interrogated, arrested or jailed some 10,000 Palestinian children over the last 17 years, according to DCIP. | Photo: Reuters

18 Mar 2018 – Israeli forces have arrested 1,319 Palestinians in the first two months of 2018, including 274 minors, 23 women, and four journalists, making the total number of Palestinian prisoners detained in Israeli jails 6,500, as of Feb. 28, 2018, according to a new report compiled by several Palestinian prisoners’ rights groups.

Of the 6,500 people detained,  63 were women, with 350 being children and 6  being girls. The report compiled by Prisoners and Liberties Affairs Association, the Palestinian Prisoner Club, Addameer, and Al Mezan Center for Human Rights, also sheds light on the regions where the Palestinians were arrested.

In January and February, nearly 381 were arrested from Jerusalem, 30 from the Gaza Strip, and the rest from the West Bank (with over 200 of those arrested hailing from the Ramallah area).

The report also referred to human rights violations against women in Israeli jails, most glaring issues include denial of medical treatment, as most women are deprived of the treatment for injuries and health-related issues, low-quality food, overcrowding in the places of detention, and physical and psychological abuse.

Per the human rights institutions, the Israeli occupation forces have killed 213 detainees since 1967, with at least 72 dying as a result of torture.

The report also pointed out that the occupying state of Israel has committed grave human rights violations and called for the “establishment of a fact-finding committee by the Human Rights Council on Israeli violations of detainees, and for the activation of international accountability mechanisms towards perpetrators.”

The significant spike in detentions comes amid renewed unrest in the West Bank and Gaza, in which Israel is increasingly arresting Palestinians over participating in protests and clashes over the December U.S. decision to recognize Jerusalem as the capital of Israel.