21 Mar 2018 – The brutal execution of Rio de Janeiro city counselor Marielle Franco on the night of Wednesday, March 14, by still unknown gunmen came as a shock for most Brazilians, but not as a surprise.

Mass spontaneous demonstrations erupted on the following night, with those participating blaming the state as the perpetrator, or at least a direct accomplice.

Franco was killed in a rain of 13 bullets in the context of the unprecedented federal takeover of Rio’s law enforcement, which on February 16 saw President Michel Temer remove the state’s law enforcement secretary and hand the Army’s Eastern Division commander, Gen. Walter Souza Braga Netto, absolute power to overrule security-related decisions by any elected official, up to and including changing internal regulations of law enforcement agencies. 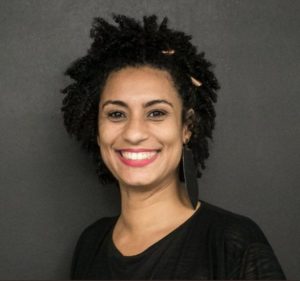 Rio expresses in a concentrated form all the dilemmas faced by the Brazilian bourgeoisie. Under the rule of the Workers Party (PT), it shifted its economy towards oil extraction, refining and transport, making it the hardest hit by the end of the commodity boom and the stalling of economic activity by companies caught in the Lava-Jato anti-corruption probe. The city underwent a massive “social cleansing” operation by the security forces against its most impoverished residents in preparation for hosting the 2014 Football World Cup and the 2016 Summer Olympics. In 2016, the state of Rio de Janeiro declared bankruptcy

The military intervention was decreed by Temer after fraudulent, hysterical claims by the corporate media of a supposed crime wave during Rio’s world-famous Carnival. Later findings by major papers, such as Folha de S. Paulo, showed that the crime rate during Carnival was actually 35 percent lower than in 2016, at the height of Brazil’s worst economic crisis in a century.

Marielle Franco, a member of the Socialism and Liberty Party (PSOL), a parliamentary split-off from the PT, was in her first term as a city councilor in Rio’s 51-member Municipal Chamber. She was elected in the 2016 municipal elections, with 46,000 votes, the fifth-largest vote for any candidate. Before that, she had served for 10 years as a parliamentary assistant to the party’s main public figure in the state of Rio de Janeiro, Marcelo Freixo, who was defeated as a mayoral candidate in the 2016 elections by the Christian chauvinist Marcelo Crivella.

Freixo’s, Franco’s and ultimately PSOL’s popularity in the city of Rio, where the party holds the second largest caucus in the municipal legislature, contrasts with its marginal role in Brazilian politics and has been cultivated chiefly through a criticism of the barbaric practices of the state’s Military Police. This criticism carries with it significant risks. Freixo was forced into a brief Spanish exile in 2011, after the city’s investigations department admitted having uncovered no less than 27 plots to murder him.

Freixo’s most prominent activity as state representative had been his heading of a 2008 state parliamentary inquiry commission (CPI) exposing police involvement with vigilante groups—known as milícias—acting mainly in impoverished working class neighborhoods in Rio’s industrial northern sector. By this point, Franco, who had been born and lived in the northern Complexo da Maré favela (shanty-town), was already working with him.

After being elected in 2016, she was tapped at the end of February to head the city legislature’s commission tasked with overseeing the federal intervention, of which she had been a known critic both as an activist and a close observer, coming home daily to Maré, where she was heading on the day of her execution.

Known as a participant in black nationalist and feminist politics—she had left a black feminist meeting in downtown Rio on the night she was killed—she had also won support among workers in the northern sector, above all for exposing police violence. Just four days before her execution, she shared on social media reports of the police killing and dumping of the bodies of two youth in the Acari favela, which was made famous last year by the death of a 13-year-old girl struck by a stray bullet while drinking water in her schoolyard.

Franco’s last social media posts replicated workers’ accounts of the reign of terror in Acari by the city’s 41st Police Battalion, which was replicating, ostensibly on its own without orders from superior officers, the individual profiling of the neighborhood’s inhabitants carried out by troops intervening in other favelas. Soldiers there have been ordered to lay siege to communities and photograph and write down information from workers’ IDs as they leave for their jobs in the morning. The 41st Battalion is the deadliest in the city, responsible for an average of 100 killings a year, and was referred to by Franco as “the death battalion.”

While law enforcement, including Brazil’s far-right intelligence chief, Sergio Westphalen Etchegoyen, have been unanimous in declaring that Franco was executed, state agents have tried to pin the blame on drug lords or milícia members, which are widely portrayed by the government and the press as rogue elements from law enforcement agencies.

The shell casings found from the bullets that killed Franco have been traced to a cache that was produced for Brazil’s Military Police.

The president of Rio’s chapter of Brazil’s Bar Association (OAB), Felipe Santa Cruz, echoed the law enforcement view after leaving a meeting with General Braga Netto, declaring to Folha de S. Paulo on March 15: “It is clear that when you shake up the structures of law enforcement you may have a reaction. Why not accept that the sector affected by these changes, the corrupt, are trying to demoralize the Brazilian state?”

He then proceeded to compare Franco’s execution to the so-called Riocentro Bombing, a botched attack on a May Day event by far-right elements in the army during the decline of Brazil’s 1964-1981 US-backed military dictatorship. The bombing was supposed to be blamed on left-wing guerrillas and offset the decline of military rule—a plot that went awry when the bomb exploded in the hands of the soldier responsible for planting it.

A far more obvious analogy would be to the death squads that operated under the dictatorship, kidnapping, torturing and murdering opponents of the military regime. The political repression carried out by the military was accompanied by a parallel activity—backed by the government and funded by businesses—by off-duty police and others to exterminate the so-called marginalized and allegedly criminal elements of the population. This latter activity has never ceased.

The line toed by Santa Cruz, generally considered by human rights activists as an “ally,” is the most convenient for the Brazilian ruling elites, which are moving rightward at an alarming pace, portraying the military intervention in Rio as the only possible defense of democracy.

While President Temer only went so far as to say, coldly, that the execution is “an attack on democracy,” intelligence chief Etchegoyen declared to the capital’s main daily, Correio Braziliense, that “our intelligence would be very stupid if it allowed an attack that weakened the intervention … it would make no sense to kill a critic of the intervention in order to weaken it.” Etchegoyen’s line is clear: the military is not willing to allow the investigation into Franco’s death to expose state agents as responsible as this would weaken the military intervention in Rio.

Whatever the findings of the investigation into Franco’s execution—and there is no reason to believe that there will be any credible ones—the political establishment will be pushed further rightward, in opposition to the fundamental social and democratic rights of the working class, and closer to dictatorship.

The commander of the Brazilian Army, General Eduardo Villas Bôas, declared to the press on February 19, three days after the beginning of the intervention, that the military would need “guarantees to act without the risk of being subjected to a truth commission in the future,” referring to the toothless commission that, during the administration of Workers Party President Dilma Rousseff, was tasked with trying to uncover crimes carried out under the US-backed military dictatorship.

Franco, in her capacity of heading a committee overseeing the military intervention, would conceivably have been able to provide material for such a future truth commission into the crimes by the military against the workers and poor of Rio.

While clearly serving to intimidate any opposition to the intervention and bolster the barbaric sentiments within the military, Franco’s execution is being exploited by the security forces as a justification for even greater repression. Arguing that the only possible suspects in her killing are criminals—either drug lords or corrupt state officials in the milícias trying to undermine the state, they insist that the military intervention needs to be deepened. The “war on drugs”—Latin America’s counterpart to the “war on terror”—demands even greater emergency powers for the state.

Etchegoyen had already declared as early as August 2017 that he feared “organized crime intervention in the elections,” telling G1.com that the end of corporate financing of elections—ruled upon by the Supreme Court that year—would “open the way for the organized crime to sponsor candidates,” which would mean “a clear threat to institutional security.” Their interest, according to a January 11 BBC interview with Brazil’s former drug control secretary Walter Maierovitch, would be backing candidates who would “cut deals to reduce police repression in some areas.”

Thus, military violence will be accompanied by a massive state propaganda campaign associating political opposition with the most venal interests—the standard accusation leveled against Franco by Brazil’s far-right. This was clearly shown with the allegations made by MBL—the main organizers of the right-wing demonstrations in favor of former Workers Party president Dilma Rousseff’s 2016 impeachment—claiming that Franco was a friend of Marcinho VP, a drug lord, and her execution had been part of a gang war.

The sharp turn to the right by the Brazilian bourgeoisie is also reflected in what had hitherto been its preferred party of rule, the Workers Party (PT). The PT-controlled trade unions had already demobilized, calling off a February 19 nationwide demonstration against President Temer’s reactionary pension reform after it was withdrawn due to the military intervention in Rio. Under the Brazilian constitution, the suspension of civil rights in part of the country precluded the vote on the reform, which requires a constitutional amendment. The PT saw no need to demonstrate against the military intervention in February, as it sees no need now.

The Workers Party’s opposition to the military takeover of the country’s second-largest city is entirely tactical. It fears that the deployment of troops to police the favelas will undermine the authority of the military.

The PT-aligned media is moving from “friendly” criticisms of the intervention, centered on the “discomfort felt by the military” during security operations and their “unpreparedness” (Celso Amorim interviewed by CartaCapital, February 16), to claims that the intervention helps imperialism by demoralizing the armed forces. This was the warning sounded by Saturnino Braga in his article reposted by ConversaAfiada, “Intervention disaster is USA at play.” There have also been calls for the use of Rousseff’s draconian anti-terrorism law in the face of Franco’s execution (Alex Solnik, Brasil247: “Marielle was targeted by a terrorist attack”).

Under the weight of the decline of bourgeois democracy, PSOL’s stated reformist positions are also morphing into a support for repression that is essentially no different from that of the PT. When the intervention began, the party asked for “more integration between the security agencies” and “the fulfillment by the federal government of its obligations in curbing the international drugs and arms traffic.”