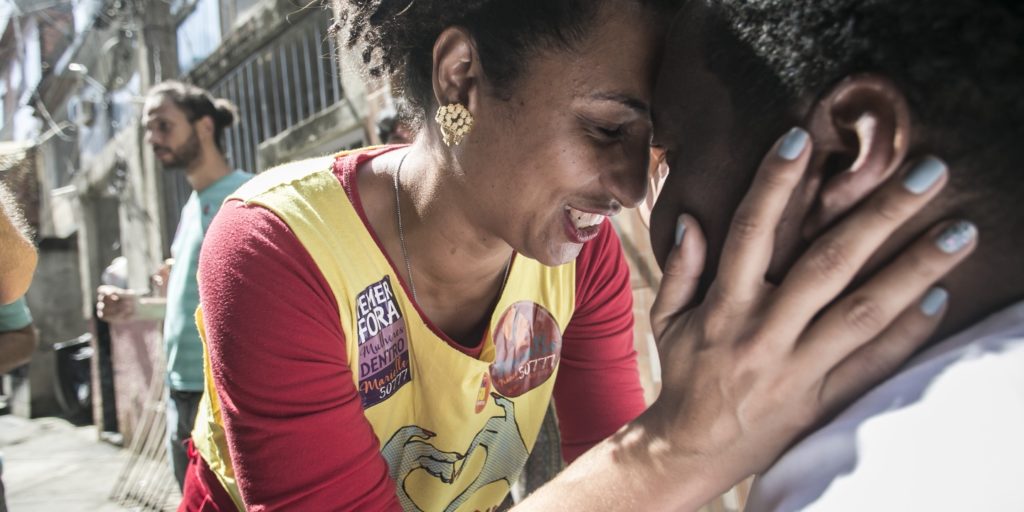 Politician Marielle Franco embraces a supporter on a visit to the Favela Mare in Rio de Janeiro on Oct. 9, 2016.
Photo: Picture-alliance/dpa/AP

16 Mar 2018 – I often like to say that it’s hard to know and understand the gravity and importance of a moment in history while you are in it. We are in a moment that I need you to understand.

On Wednesday [14 Mar], in the middle of Rio de Janeiro, Brazil, a massively important civil rights leader was shot and killed in a brutal drive-by assassination. Her name was Marielle Franco. Like me, Marielle was just 38 years old.

We don’t yet know who murdered Marielle and her driver, Anderson Pedro Gomes, though early indications are that the police might have been involved. Investigators reportedly determined that the bullet casings found at the crime scene had been purchased by the Federal Police in 2006. Bullets from the same lot were used in a series of brutal attacks that killed at least 17 and wounded seven in São Paulo on one night in 2015. Two police officers and one municipal guard were convicted for the massacre.

Marielle Franco was a threat to a very disturbing status quo in Brazil.

What we know for sure is that Marielle was a threat to a very disturbing status quo in Brazil.

In the United States, nearly 1,200 people were killed by police officers in 2017. These deaths often destroy families, and the cops responsible for even the most egregious cases are rarely held accountable. In most peer nations, like Canada, police are responsible for nearly 95 percent fewer deaths. American police officers kill more people in a few days than police in many nations kill in a year.

More than any other factor, it was the egregious crisis of police brutality in the U.S. that sparked the Black Lives Matter movement.

But did you know that Brazil may actually lead the entire world in police brutality? Despite having 120 million fewer citizens than the U.S., Brazil had a staggering 4,224 people die at the hands of police in 2016. That number represents a 26 percent surge over the previous year.

This is an international human rights crisis. This is an egregious scandal.

And no place has felt the brunt of the violence more than the state of Rio de Janeiro, where police murdered at least 1124 people in 2017 — a 22 percent jump over the last year. On top of all this, there is a military intervention in Rio right now. You want to talk about militarized police? The armed forces have literally taken over the security apparatus of the state.

Marielle Franco, a brilliant leader with a huge heart, was at the center of the movement against police violence in Brazil. She was, for all intents and purposes, a leader of the country’s parallel to the Black Lives Matter movement in the U.S. That’s not what it was called, but the similarities are unmistakable. That’s why tens of thousands of people took to the streets to protest and mourn her death.

She was a black, queer woman fighting not just against police brutality, but for broader equality and empowerment of women and black people throughout Brazil. In fact, she was literally leaving an event focused on the empowerment of black women in central Rio when a car pulled up and someone shot her four times in the head.

Her car wasn’t stolen. Her purse wasn’t taken. She was targeted and assassinated.

Having just been elected to Rio de Janeiro’s city council in 2016, Marielle’s political voice and power were on the rise. She oversaw the women’s commission at the council and, just last month, was chosen as the speaker for Rio de Janeiro’s commission overseeing police and security forces in the city’s favelas, or slums. Her party was planning to run her as a candidate for vice-governor of the state in elections later this year. 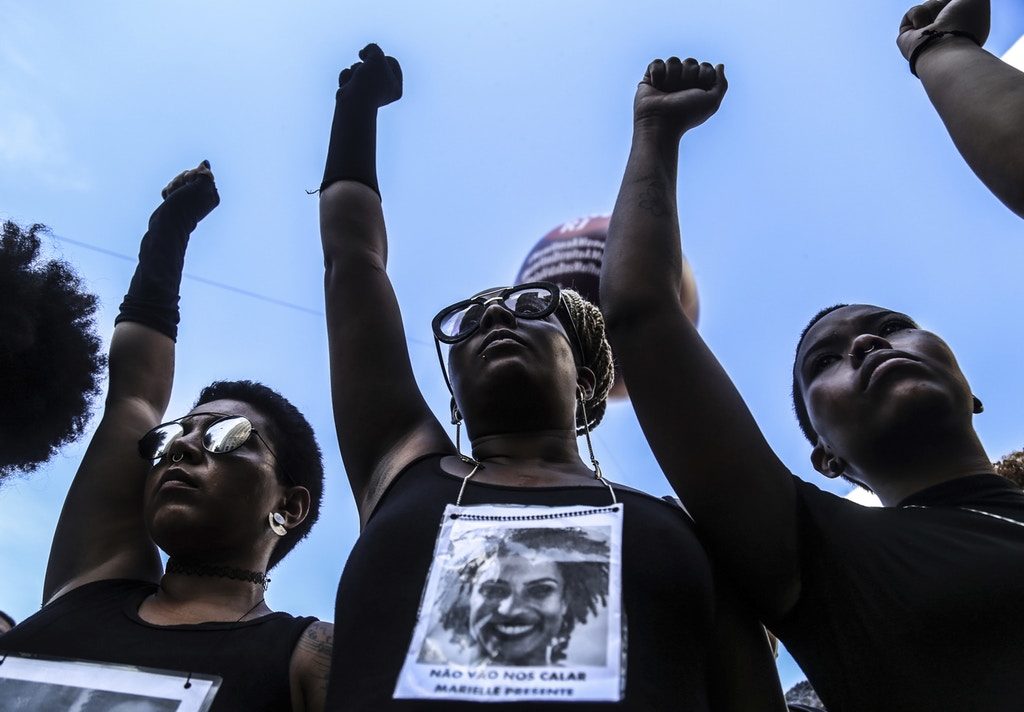 Women raise their hands in protest of the death of Marielle Franco in Rio de Janeiro on March 15, 2018. Photo: Ian Cheibub/AGIF/AP

She was a dreamer. She gave everybody around her hope. In a country and in a world that trusts politicians less and less, she showed people that courageous leaders could be principled, progressive, and fight for change from the inside out.

We must connect our struggles in the U.S. to those in Brazil. Marielle Franco was one of us.

Marielle’s murder, in many ways, reminds me of the assassination of Patrice Lumumba, the first prime minister of Congo. Full of hope and ideas, Lumumba was just 35 years old when he was killed. He was the embodiment of hope and change in a country that desperately needed both.

Before both Malcolm X and Martin Luther King Jr. were assassinated, each just a year older than Marielle Franco, they had grown to believe that it was important to connect our local civil rights struggles and priorities with the fights for civil and human rights going on all over the world.

It’s no mistake that the two countries with the first and second largest populations of people of African descent outside of Africa — Brazil, with nearly 56 million, and the United States with 46 million — are also experiencing a crisis of police brutality. It’s because black lives, be they in Rio or Ferguson, São Paulo or Baltimore, too often don’t matter to police and politicians. In the name of safety and security, human beings are being treated as throwaway people. And this will never be OK.

Know the name of Marielle Franco. Do not allow her cause to die with her. Show the world that you can kill a man or a woman, but cannot kill an idea.

A Hidden Factor in Police Shootings of Black Americans: Decades of Housing Segregation

U.S.-Trained Police Are Hunting Down and Arresting Protesters Amid Post-Election Crisis in Honduras