Assange Works for the People – Now We Need to Save Him 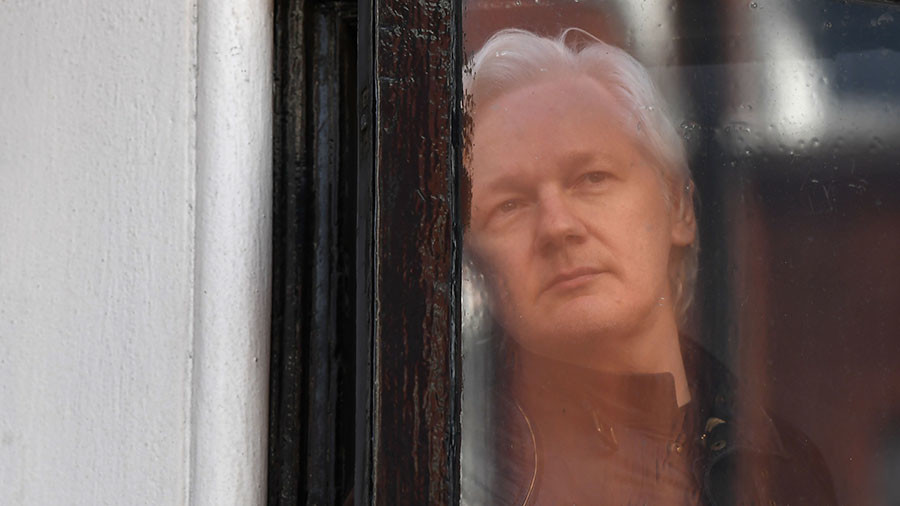 2 Apr 2018 – Julian Assange has been silenced again, and the timing is most suspicious. With the Cambridge Analytica story dominating the news, it seems some powerful people have reasons to keep the brave WikiLeaks boss quiet right now.

Ecuador is a small country, and one can only imagine the brutal behind-the-scenes pressure exerted on it by Western powers to increase the isolation of Julian Assange from the public space. Now, his internet access has been cut off and many of his visitors are refused access, thus rendering a slow social death to a person who’s spent almost six years confined to an apartment at the Ecuadorian embassy in London.

This happened before, for a short period around the time of the US elections, but back then it was a reaction to WikiLeaks publishing documents which could have affected the outcome of the Trump/Clinton race, while there is no such excuse now. Because, currently, Assange’s “meddling” in international relations consists only of publishing on the web his opinions about the Catalonia crisis and the Skripal poisoning scandal. So why such brutal action now, and why did it cause so little uproar in the public opinion?

As for the second question, it is not enough to claim that people simply got tired of Assange. Rather, a key role has been played by the long and well-orchestrated slow campaign of character assassination which reached the lowest level imaginable two months ago with the unverified rumors alleging how the Ecuadorians want to get rid of him because of his bad smell and dirty clothes.

In the first stage of attacks on Assange, his ex-friends and collaborators went public with claims that WikiLeaks began well but then it got bogged down with Assange’s political bias (his anti-Hillary obsession, his suspicious ties with Russia, etc.). This was followed by more direct personal defamation: for instance, he is paranoiac and arrogant, obsessed by power and control. But now we have reached the direct bodily level of smells and stains.

They say Assange is paranoid? How could anyone who lives permanently in a flat which is bugged from above and below, a victim of constant surveillance organized by secret services, not be? As for him being a megalomaniac? When the (now ex-) head of the CIA says your arrest is his priority, does this not imply that you are a “big” threat to some, at least? And the trope where Assange behaves like the head of a spy organization? But WikiLeaks IS a spy organization, although one that serves the people, keeping them informed on what goes on behind the scenes.

Yet, they say Assange is a refugee from justice, hiding in the Ecuadorian embassy to escape judgment. But what kind of justice is this which threatens to have him arrested when the case has already been dropped?

So let’s move to the big question: why now? I think one name explains it all: Cambridge Analytica – a name which stands for all Assange is about, for what he fights against; the disclosure of the link between the great private corporations and government agencies.

Remember what a big topic and obsession the Russian meddling in the US elections was – now we know it was not Russian hackers (with Assange) who nudged the people towards Trump, but instead the West’s own data-processing agencies which joined forces with political forces. This doesn’t mean that Russia and its allies are innocent: they probably did try to influence the outcome in the same way that the US does in other countries (only in this case, it is labeled “democracy promotion“). But it means the big bad wolf who distorts our democracy is not in the Kremlin, but walking around the West itself – and this is what Assange was claiming all along.

But where, exactly, is this big bad wolf? To grasp the whole scope of this control and manipulation, one should move beyond the link between private corporations and political parties (as is the case with Cambridge Analytica), to the interpenetration of data processing companies like Google or Facebook and state security agencies.

We shouldn’t be shocked at China but at ourselves who accept the same regulation while believing that we retain our full freedom and that media just helps us to realize our goals (while in China people are fully aware that they are regulated). The overall image emerging from it, combined with what we also know about the link between the latest developments in biogenetics (wiring the human brain, etc.), provides an adequate and terrifying image of new forms of social control which make the good old 20th century “totalitarianism” seem a rather primitive and clumsy machine of domination.

The biggest achievement of the new cognitive-military complex is that direct and obvious oppression is no longer necessary: individuals are much better controlled and “nudged” in the desired direction when they continue to experience themselves as free and autonomous agents of their own lives. And this is another key lesson of WikiLeaks: our lack of freedom is most dangerous when it is experienced as the very manifestation of our freedom. Because what can be more free than the incessant flow of communications which allows every individual to popularize their opinions and forms virtual communities at the user’s own volition? This is why it is absolutely imperative to keep the digital network out of the control of private capital and state power, i.e., to render it totally accessible to public debate. Assange was right in his strangely ignored key book on Google (When Google Met WikiLeaks, 2014) in his understanding of how our lives are regulated today, and how this regulation is experienced as our freedom. Meaning, we have to focus on the shadowy relation between private corporations which control our commons and secret state agencies.

Now we can see why Assange has to be silenced at exactly this moment when the topic of Cambridge Analytica is everywhere in our mainstream media. At a time when all the effort of those in power goes into reducing it to a particular “misuse” by some private corporations and political parties – but where is the state itself and the half-invisible apparatuses of the so-called “deep state”?

No wonder that the Guardian, which extensively reports on the Cambridge Analytica “scandal,” recently published a disgusting attack on Assange as a megalomaniac and fugitive from justice. Now, as far they are concerned, write as much as you want about Cambridge Analytica and Steve Bannon, just don’t dwell on what Assange was drawing our attention to: that the state apparatuses which are now expected to investigate the “scandal” are themselves part of the problem.

One often reads how the old Soviet secret service not only punished its traitors even if it took decades to do it, but also fought doggedly to free them when they were caught by the enemy. Assange has no state behind him, just us, the public – so let us do at least what the Soviet secret service was doing, let’s fight for him no matter how long it takes!